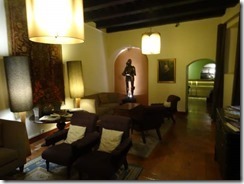 Our next day took us to Obidos Portugal. How could we resist the opportunity to spend the night in the tower of a 14th-century castle? Okay, perhaps it wasn’t as romantic or rustic as we had imagined. Once in the room, we were hard pressed to remember that we were in a castle as the room seemed so…well, like a hotel room with small windows. But Posado Castella is, indeed, a luxury hotel (complete with luxury pricing). Even so, it was a very comfortable room that gave us more than enough time to explore all the quaint streets inside the city walls, explore some of the stores, restaurants and churches (including a church that has been reinvented as a community library), scale and walk the walls, and still have time for dinner at the castle’s Posada restaurant, the best place in town

Our dinner began with a regional amuse bouche of pork with picked vegetables followed by two main dishes. The roasted octopus with roasted peppers and onions and hot olive oil was okay, but the fish was overwhelmed by the accompaniments. Meanwhile, while Tom enjoyed the accompaniments (chestnut puree and mushroom sauce) of his grilled wild boar, the boar was nice and gamey (as would be expected) but too tough to cut or chew. It was, therefore, happily replaced by another dish, a very nice grilled swordfish with ham. Our wine, a 2013 Crasto was still too young, but the most complex and ageable wine have yet had in the country.

In hindsight, Obidos was a nice place to visit during the day but we wished we had spent the night in an area that had more to do,

From Obitos, we made four more stops on our way to Porto via:

Alcobaca, which is home to World Heritage Site, Mosteiro de Santa Maria de Alcobaca, Portugal’s largest church. The soaring columns, vaulted roof and the intricately-carved tombs of doomed lovers are deservedly among the most popular attractions of this thousand year-old monastery (founded in 1153). We also liked the elaborately carved doorway to the sacristy, both of the cloisters, the huge, walk-in kitchen chimney and the water facets protruding from carved human faces. Best of all was Kings Hall, with terra cotta statues of Portuguese kings and a series of tile panels commemorating the coronation of King Alphonso.

Nazare, a pretty fishing and beach town where a funicular takes you up a steep cliff to the Sitio viewing point for a view of the coast and then to the center of town with its sea level views of waves crashing against the rocks and also, dozens of fresh seafood restaurants. We selected wisely for the food (unwisely for the speed of service in a packed restaurant.

Masr Bravo restaurant was packed and  the service was slow but it was good. We had two orders of Ameijoa clams with a delicious garlic and olive oil. With this, we had two white wines: a Douro Valley Planalto and a Vihno Verde (Green Wine) with its characteristically fresh, fruity, acidic and slightly bubbly taste. Okay, but we will probably stay with slightly more mature whites.

Batahla, with its huge Mauneline Gothic Dominican abbey (also a World Heritage Site) that was built from 1386 and continually expanded by subsequent kings over the next two centuries. The Founders’ Chapel with the tomb of King Joao and his wife, is extraordinary with its intricately carved stone details and the Unfinished Chapel, which was abandoned in favor of work on Lisbon’s Jeronimos Monastery almost haunting. The monastery’s two cloisters, and the view of the steeple from them, are also worth a visit.

Tomar, a town with a pretty old town founded by the initial master of the Knights Templar, and topped by a castle that houses the huge Convento do Cresto and its gardens.