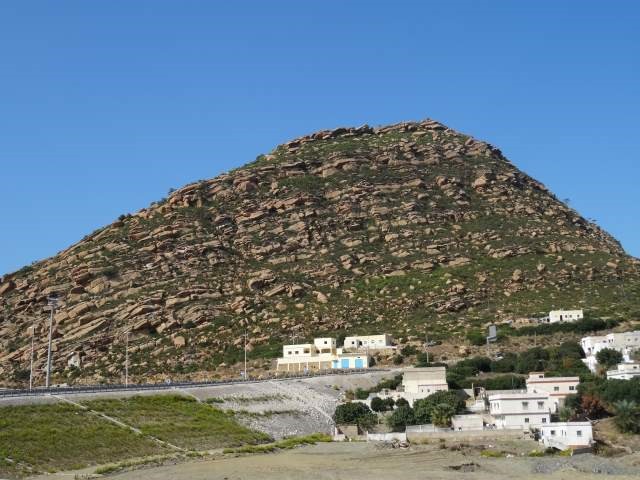 Our ferry from Spain took us to Moroccan soil in Tanger Med, a Moroccan shipping port that also holds little appeal for tourists. We had arranged for a car to pick us up and take us on another semi-scenic trip to our afternoon and evening destination: the Moroccan city of Tetouan where we would stay for a night. Once we escaped our own private version of passport hell (we seemed to be the only ones on the ferry unaware that our passports had to be stamped before the ship docked in order to get off the boat and we had to wait 2 hours for the border police to get back on the boat to stamp our passports), we found our car still waiting for us. We were driven from the port up, up, and up, through a very scenic mountain pass, and then along the open road as we eased into less dramatic, more hilly country, passing a few towns before arriving in the much larger than we expected, city of Tetouan. 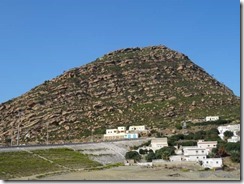 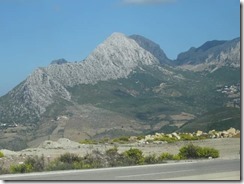 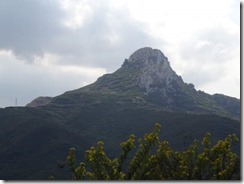 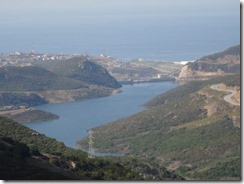 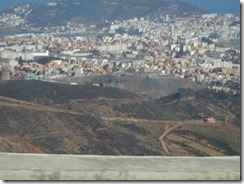 We then checked into our beautiful suite, in our beautiful inn (Hotel Blanco Riad), which is perfectly located, in the middle of the medina—one block from the souk and two blocks (in the other direction) from New Town’s (Ville Nouvelle’s) main street and the Royal Palace.

Tetouan is somewhat reminiscent of Andalusia (from where we just came). This is no accident as Andalucía was largely created by Jews and Arabs from this region. Moreover, the city of Tetouan was founded by a flood first of Jews, and then of Arabs who were forced to leave Spain by the Inquisition. It is not a surprise that they brought many of their architectural, cultural and culinary traditions with them. And, since Tetouan was an important trading and diplomatic center in the 1800s—and especially since Spain did indeed briefly control and use the city as a regional capital in the 1860s–it also had access to the resources required to create a prosperous city. Among the Andalusian-like sights are: 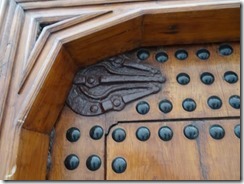 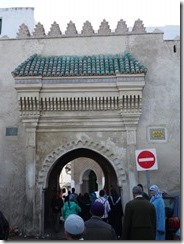 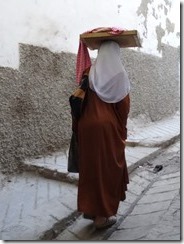 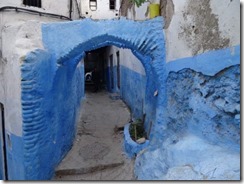 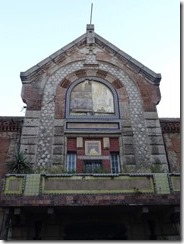 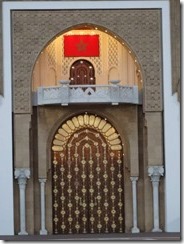 A walk through the medina was a kick: very, very  crowded, but a kick nonetheless. The entrance from the street on which our hotel is located brought us right onto the bazaar’s main street (Rue El-Mokadem)—in the middle of a stretch of a few blocks in which most vendors sold pots and pans. Other blocks were dedicated to food, to shoes, clothes and even to shops that made and sold doors. Some blocks contained sellers or different products, everything from olives and dates, toys, cell phones, and plumbing fixtures. Other sellers laid their wares out on blankets—everything from used clothes, to dolls, circuit boards (for what, we do not know) and even a family photo. One shop even sold wetsuits (don’t ask). 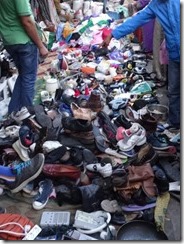 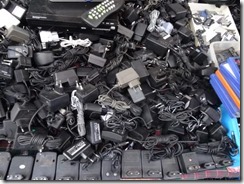 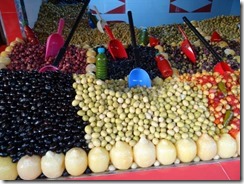 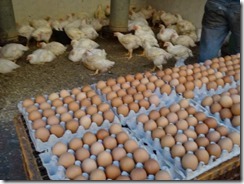 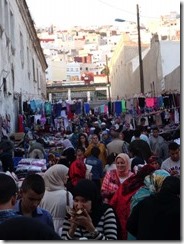 No matter how confusing and how difficult to pick through piles of clothes to find the right style, color and size; or more difficult still, to sift through stacks of unmatched, unlabled shoes to somehow find two, of the same size and the same style—people seemed to thrive on the challenge. The streets were packed, people picked through merchandize and negotiated prices. Then, a few blocks away, we went to an enclosed market, Marche Central, which houses a couple dozen vendors selling various packaged food products. While the outdoor street stalls were packed with customers, the aisle of the indoor market were empty. 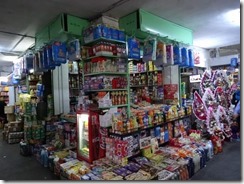 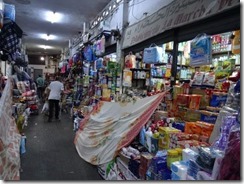 Then, just as we walked through one of the old city gates, the market ended and we were on to another site—a large Muslim cemetery with whitewashed concrete plots, many of which were tiled. And unlike the case with U.S. cemeteries, which are largely devoid of people, this cemetery was filled with people paying respect to their deceased relatives. 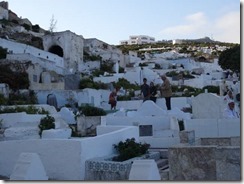 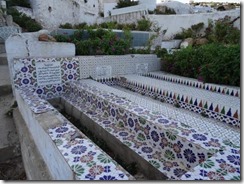 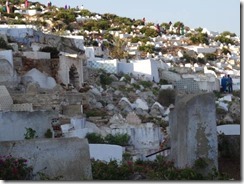 Ville Nouvelle has a very different character. The narrow streets of the medina, with even narrower residential streets climbing up and down steep stairways from the commercial streets, is so closed in that you can often barely see the sky. Ville Nouvelle streets, and especially the boulevard, are wide and open and the buildings are taller, more ornate and have many, many more windows. Shops are much more similar to those seen in Western cities and people are dressed in more contemporary clothes. 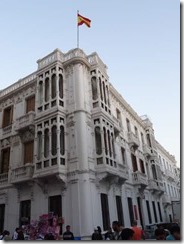 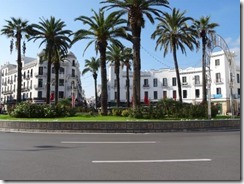 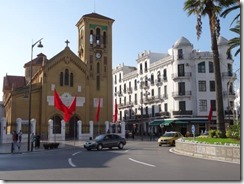 On the evening we were there, Boulevard Mohammed V was closed to traffic and police were stationed on every corner. The royal plaza, meanwhile, was filled to lights and large, lit emblems of the royal family were illuminated on a wall across from the palace. The reason: the King was returning to his palace later that night or the next morning (few people know for sure, and they aren’t talking). 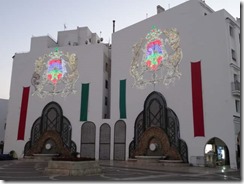 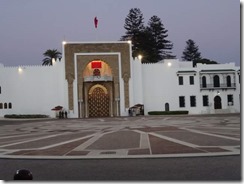 We only had one meal in Tetouan. After the hassel of getting into Morocco, we wanted to eat at a place that had alcohol (not all restaurants serve alcohol). While the dinner at our hotel looked good, they didn’t have wine so we opted to explore Moroccan cuisine at El Reducto. We began with a selection of appetizers (fried pastries filled with either cheese, fish or chicken), followed by two classic Moroccan entrees: Chicken Couscous (slow cooked chicken over a bed of couscous with a chicken broth and olive oil sauce) and Lamb Tagine (slow-cooked lamb served with prunes, almonds and the thick, rich sauce in which it was cooked. Both were quite good, although we are still dreaming of the great food we had throughout Spain. Dinner also gave us a chance to sample the first of our Moroccan wines—a Bonassia Cabernet Sauvignon (we couldn’t find a vintage on the bottle). Although it wasn’t particularly complex or age-worthy, it was a pleasant, easy drinking wine. 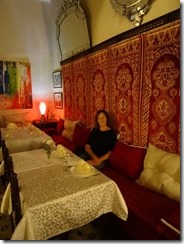 And then there was our hotel…..

Our first night’s hotel in Morocco was amazing.  The Hotel Blanco Riad is nestled in an 18th century home. As mentioned, the location is perfectly located in the middle of the medina and by the Royal Palace. Once you enter the door, the hustle and bustle of the medina went away and peace and calm prevailed.  You entered our unbelievably beautiful HUGH room (pictured below) through beautifully carved doors. The floor is our room is original and gorgeous, The shower is bigger than our bathroom at home. Unfortunately, we couldn’t get the water in the shower hot enough to take a nice shower, but it looked good.  The staff, of course, was great. We didn’t eat here as they don’t have a liquor license but others in the hotel told us that the food was excellent. We did have them arrange a taxi to us  up at the ferry building and bring you there. You might be able to do it for less money if you negotiated on your own, but it was relatively inexpensive for us well worth it for us. Also, I am not sure that we would have been able to find the Riad on our own as it was down a small alley. And, since many of the roads were closed in anticipation of the King’s arrival, our taxi driver struggled to find a place to park his taxi so that he could walk us to the Riad’s door. Be advised that you have to pay for the taxi in cash. The hotel will front the money to the driver but you reimburse the hotel in cash versus credit card when you check out. 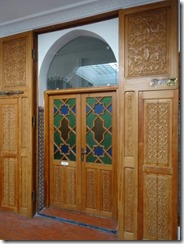 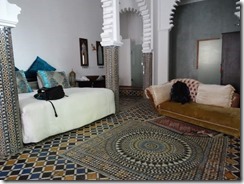