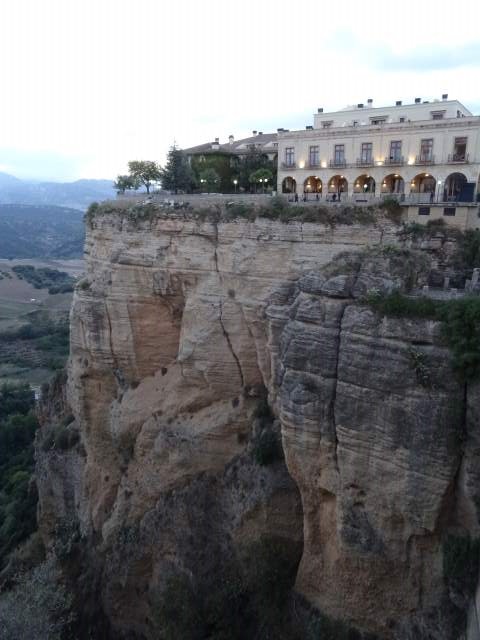 Our last stop in Spain was in Ronda. It is a pretty, but not necessarily the prettiest of Andalucia’s White Towns—towns in which virtually all buildings were painted white initially to reflect the heat of the sun, and now due to government mandate. But what Ronda may lack in pure beauty, it more than makes up for in drama. The old town (which is where we stayed and devoted most of our time) is built atop a huge 172-meter rock outcrop that is spanned by two dramatic bridges—a view that Hemmingway once claimed, left him speechless. While we were not speechless, we were awe-struck at the beauty. 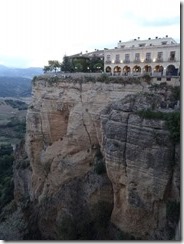 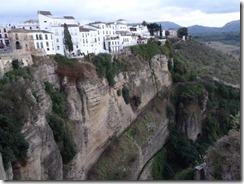 To get into the “old” section, one can cross The “New Bridge” which was built in the 18th century or the “Old Bridge” (from the 14th-century. 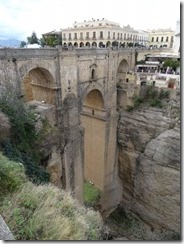 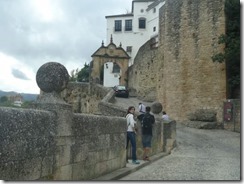 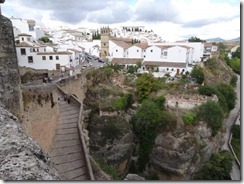 The most dramatic of the town’s sites are certainly of and from the bridges and the escarpments over the sheer rock cliff faces. This being said, there are also a number of other interesting and pretty sites, including: 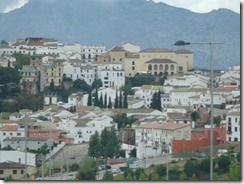 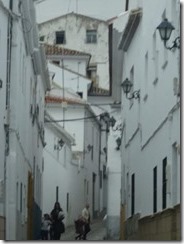 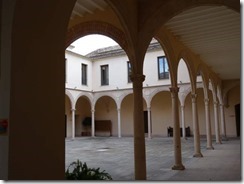 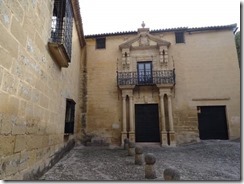 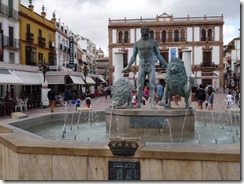 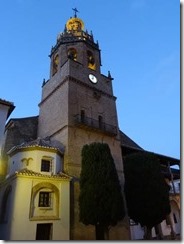 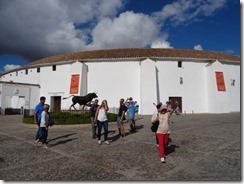 An Introduction to Andalusian White Towns

Rondo was also our base for a day trip into several of Andalucía’s White Towns. These remote villages are scattered across the mountainous landscape in which virtually all the buildings are white. Although the whitewashing of buildings began as a practical necessity to reflect (rather than to absorb) the sun, it became so popular—and such as tourist draw–as to become a local government mandate. And they are beautiful when nestled into the mountains 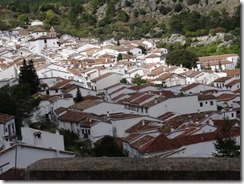 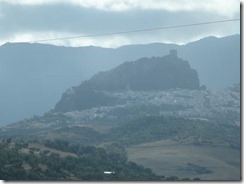 Although we originally planned to rent a car and drive to some of these towns ourselves, we decided to hire a car and driver. We’re glad we did. Our guide, Chris, who owns Bespoke Tours, has only been living in Ronda for five years, but knows the area very well and explained the history, economics and culture of the region, as well as the sights. We began in Rondo (the old town which is itself a White Town), driving down the cliff face along an ancient, bone-rattling Roman cobble road. Along the way, he explained the foundations of the local economy—olive oil (versus olives), acorn-fed black pigs (the source of the Patanegro ham), Payoyo cheese (a soft, unaged cheese that is not among our favorites), almond, walnuts, chestnuts, quince and of course, the grapes and the local wines that we had with each of our Rondo meals.

And when there’s wine, there are corks—which is one of the area’s more important harvests. /Although this time the cork was not used for corks, but for floors etc.) Cork is stripped from the trees in 8 year cycles. It takes much skill and a sharp knife to take off the cork properly so as to not damage the tree or the cork. Once the cork is removed, the exposed area is red. The red gradually turns black as it is exposed to the air and begins to grow another round of bark. The harvested cork is left in large piles of cork strips to dry before being sold. 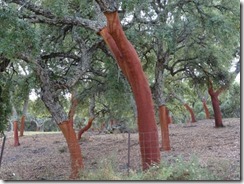 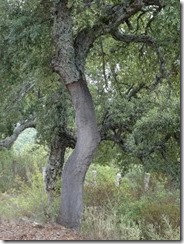 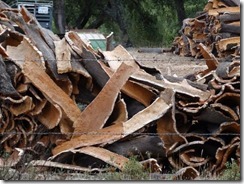 We drove through the rugged mountainous country and saw the dramatic change in scenery—from dry and brown to verdant green as we crossed the mountains on the way to the perpetually rainy town of Grazalema, which is only 30 km from the Mediterranean and 50 km from the Atlantic. And we learned of the unusual Pinsapo pine trees, which grow almost exclusively in this wet ecosystem, between 900 and 1,700 meters of elevation, and are so prized by the government that anyone caught cutting or otherwise killing one is subject to a fine of 50,000 Euros! 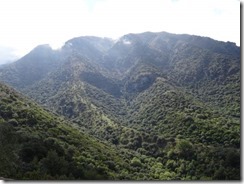 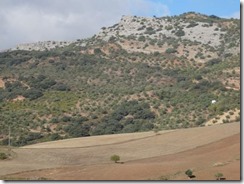 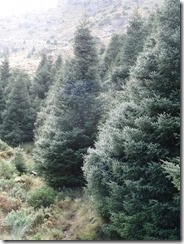 Then, after a brief stop at the mouth of the pretty, 8 km long Cave–which has 25 lakes, including one that is an amazing 1,023 meters deep—we visited a few of the neighboring White Towns. These included: 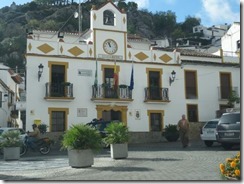 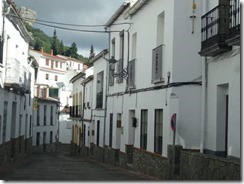 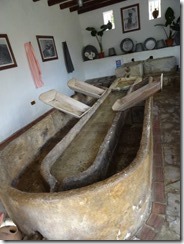 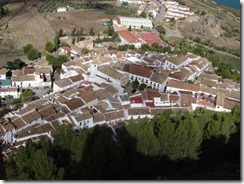 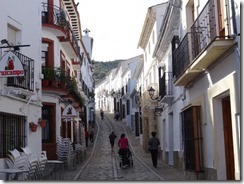 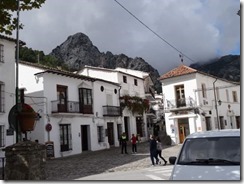 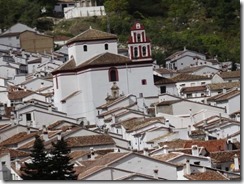 We were extremely happy with our meal choices in Rondo. In fact, we have been very happy with the food in Spain in general. After a month and a half in France (where we indeed had some wonderful food) we entered Spain with modest food expectations, Boy did we underestimate the country.

True, our meals varied considerable from 1 euro pintxos, through tapas, raciones to multi-course prix fixe meals at restaurants of Michelin starred restaurants. One thing, however, was the same throughout: We loved the food!

Some of our meals were standard everyday fare; some were unusual preparations of standard dishes; some totally innovative. True, not every dish hit the mark. But overall, we enjoyed virtually every meal—and most at prices far below those we could even imagine paying for comparable food in France or three U.S.

Examples of our meals are discussed in multiple blogs across our visit to Spain. But for all the differences, two things were the same: the quality of the ingredient, and the care in the perpetration. And Rondo did not disappoint us in the food department. We ate at the following places:

Bodega San Francisco, where we made a dinner of tapas and raciones, consisted of a large, delicious serving of sea snails in white wine with garlic and parsley, mushroom croquets (very earthy, but good), an okay tortilla with shrimp, and as local Rondo wine that was a blend of Cabernet, merlot and syrah.

Almocabar, perhaps the best food we have had in Spain—and that is very high praise—where we split four starters, all of which were wonderful. These were: free-range egg with truffles, Iberian ham and spiced salt; marinated sardines (which the menu called whitebait) with chopped egg and tomato puree; stuffed baby squid with spring onion and Amatadillo sherry sauce; and French toast with two large lobes of seared foie gras with berries and strawberry jam. We enjoyed the meal with another Ronda wine, Chincilla 6+6, which is a blend of tempranillo, syrah and cabernet. Although the food and service were flawless, we could not help but to be amused by the kitchen, where one person appeared to be working on peeling and seeding a single squash through our entire meal without being able to take the time to clear a single plate (of which there were four piles of at least six plates and bowls) from the serving area. Strange, but whatever works. And this meal clearly worked! 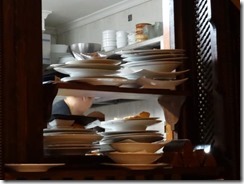 El Campillo At the urging of our guide Chris, we stopped here for lunch and had the delicious, last-of-the-season heirloom tomatoes and goat cheese with olive oil and sea salt; a very good plate of the region’s famous (and fatty) Patanegro ham (from black feet pig whose diets consist of foraged acorns); and a less than inspiring selection of tapas consisting of potato salad and olives, tomato/pepper and octopus salad, salami, cheese and potato omelet. One of the highlights was another local wine (also recommended by our guide), a 2011 Los Aguilares Pago El Espino, which is a blend of Petite Verdot, Tempranillo and Merlot).

We stayed at Baraka Boutique Bed & Breakfast. It is wonderfully located in the historic area on a quiet little street. While we don’t know the criteria of how stars are awarded (the  street sign showed it as one star), we have stayed in less pleasing accommodations with more stars. Our room had twin beds which left only a narrow space between the wall and the foot of the bed to walk to the bathroom. But it was doable as long as we took turns. But the room was also long in the other dimension and we had a table and places for our luggage. Wifi was good in the room. We also had a hot water pot, instant coffee and tea, plus a small wrapped muffin in the room. The bathroom had a stall shower, which had a strong water force. A sign in the bathroom said there was enough hot water for one long shower or two smaller ones without having to wait for more hot water. As we are from California, we are used to short showers due to the water shortage and didn’t have any issues. The room had an overhead fan and two windows that opened for cross circulation. As we were there in October, the room was sufficiently cool without the fan. Breakfast consisted of freshly squeezed orange juice, fresh fruit (we had apples and grapes) and a wonderful yogurt that our hostess made by draining plain yogurt overnight, then adding olive oil, mint and salt. This was served on toast (we also had the option of jams on the toast, but we opted for the yogurt). The high point of this trip, however,  was our hostess/owner, Anahid. She was extremely helpful both before the trip and during the trip, patiently answering our questions and helping us secure a driver for  our day trip. She also gave us great eating recommendations (see dining above) and made reservations for us.