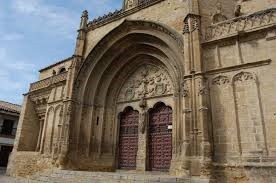 From Cordoba Spain, we made our way to Ubeda Spain, a World Heritage town. It won the patronage of a number of powerful men through the 16th century, is a literally a museum of Renaissance architecture. Everything from the remaining city walls, to the churches, the former palaces and even the old city hospital are museum-quality showplaces. Among the most interesting buildings are: 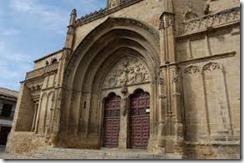 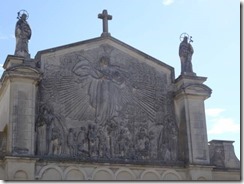 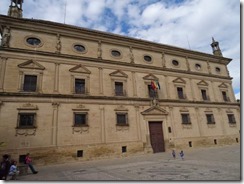 The most impressive collection of historic 16th-century buildings are those that surround the large Plaza Vasquez de Molina. These include: 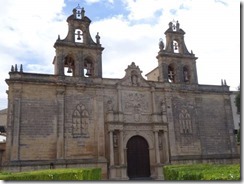 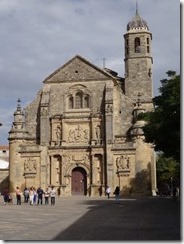 Most grand, although probably the least ornate of all is the former Hospital de Santiago, built in an austere Renaissance style and now home to a conference center and rotating art exhibits. Among the most impressive sights are the mosaic tower, the serenely symmetrical courtyard, the chapel, the garden and especially the beautiful wall and ceiling murals that decorate the complex’s main staircase. 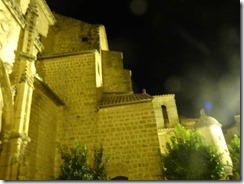 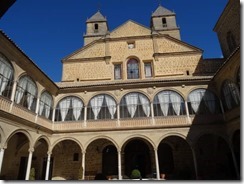 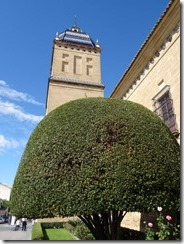 And if you want more history, there’s an archeological museum that traces the city’s history, culture and architecture back to Neolithic times.

Another, very scenic, non-historic spot is the pretty Plaza de Andalucia. With its flowers, fountain, and its setting among churches and historic buildings at a six-way intersection of commercial streets. 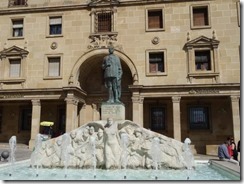 But, while many of the individual buildings are interesting, more interesting yet, as is frequently the case in such ancient towns, is simply strolling through the narrow streets and alleys and discovering hidden gems and pretty squares that are brimming with tables and patrons. 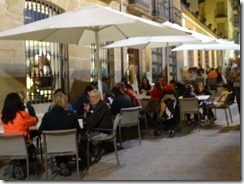 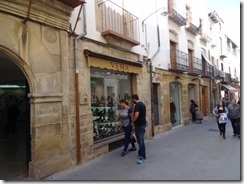 We stayed at the Neuve Leyendas, Plaza del Lopez Almagro 3, Ubeda. The small hotel is in an ideal location in old town, a, easy 15 minute walk from the bus station and right near the beautiful Plaza Vasquez de Molina. We stayed in 2 different rooms during our stay. The first one had unpleasant smell in it—kindof like sewage but we couldn’t find the source. Was it coming in from the outside or was it from something inside the room? We could never figure it out. The air was turned off for the season so we had to keep the windows open for cooling during the night. As a café is right below the windows, we couldn’t escape the noise and cigarette smoke that came into the room. We live in a city and are used to street noise, but this was bothersome to us. We could also hear every sound from people in the other rooms near us, including the guy next door snoring (loudly). The second night we were in a much better room. We still had the street noise issue, but we couldn’t hear the people around us and the room did not smell. If we had this room for both nights, our review would have been 5 stars as this is a small intimate hotel run by a family who worked hard to please you. However, balancing the 2 rooms, we have to say this is an average place to stay and would try another place the next time.