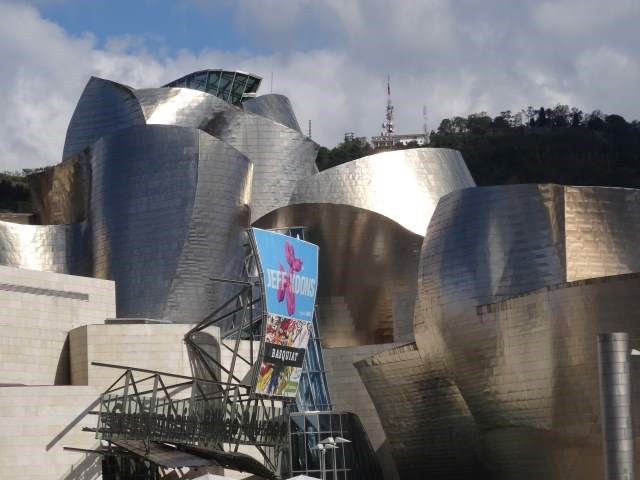 Our visit to Bilbao Spain focused primarily on Museo Bilbao Guggenheim—for the famous Geary building itself, as well as for its art. 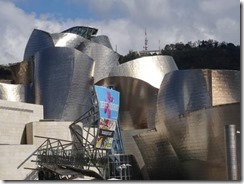 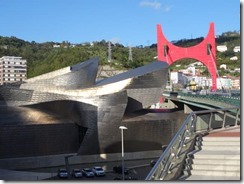 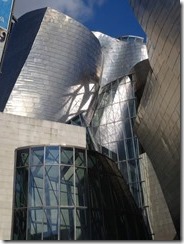 Although building is as striking as it appeared in the pictures we have seen, it is much larger and multi-faceted than we anticipated. It is fun just walking around and through the building, and exploring different shapes, surfaces and angles. The art is at least as interesting as the building. Each floor had a different attraction. The ground floor devotes an entire wing to a huge Richard Serra installation titled “The Matter of Time”. While we have seen and walked through a number of Serra pieces before, this is different—it consists of about eight different, full-size steel pieces through which visitors walk, Each provides a very different visual and special experience. The combination integrates public and private spaces in a way in which the overall experience is greater than the sum of walking through each one . And the audio guide provided a great explanation of the pieces. 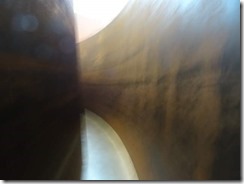 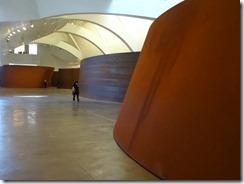 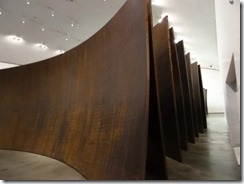 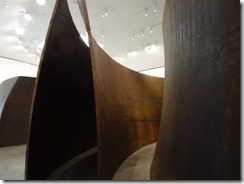 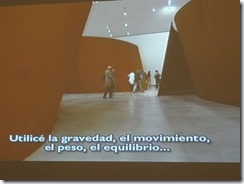 The second floor, overflowing into a section of the first and even out into the front, side and back courtyards, was devoted to a huge retrospective of Jeff Koons’ work. The Koons experience begins from the moment you approach the museum, with a huge, flower-strewn topiary sculpture of an adorable puppy. The water garden has a stack of his silver balls and the back deck is graced with what appear to be a bunch of inflated, multi-color, stainless steel tulips. The indoor exhibit is introduced with his famous, playful representation of Popeye. 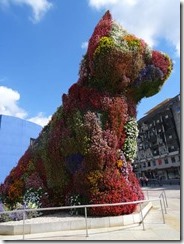 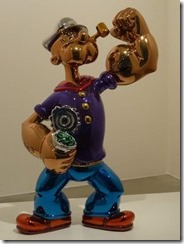 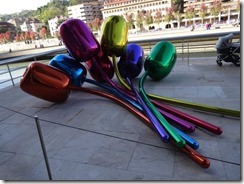 The Koons exhibit contains descriptions and examples of many, many of his series (most of which we were forbidden to take pictures). These range from: 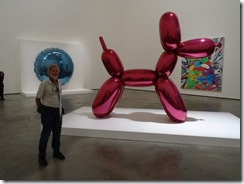 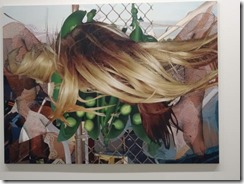 Then there are series that represent clear homages to historical artifacts (such as the Liberty Bell) and to artists whose works have influenced his own. Consider, for example his Hulk Elvis series, in which The Hulk, in all types of surroundings (including a sculpture in which The Hulk is an actual, working pipe organ), which is based on the Elvis pose as a macho cowboy in Warhol’s representation of a movie poster. Or his use of BenDay dots (a la Roy Lichtenstein) and his inflatable lobster (a reference to Dali’s lobster telephone), or his allusions to our mass produced, disposable culture (with his metal casts of inflatable toys. 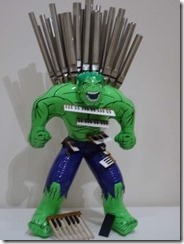 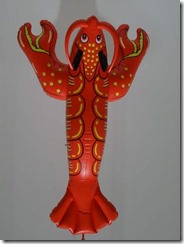 Speaking of comprehensive exhibits, you must also visit the third floor, with its huge retrospective on the tragically short career of Jean-Michel Basguiat. The exhibit explains his heritage and upbringing (as the middle-class son of an accountant and his wife who moved to New York from Haiti) and examines, through photos, paintings and explanations of his roughly ten years as an undiscovered graffiti artist (a term he loathed), to his “discovery” and resultant explosive rise to fame, his association and collaboration with Andy Warhol, and his very early (at age 27) death (from a drug overdose, which the exhibition never mentions). 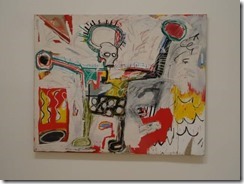 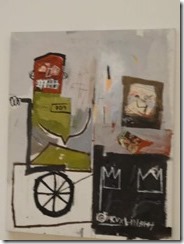 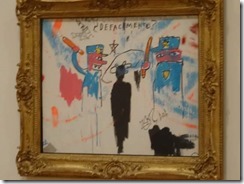 The exhibit explains and demonstrates the roots and the manifestations of the social, political and especially racial commentary of his work, the recurrent subjects (such as black heros including Jesse Owens, Martin Luther King, Charlie Parker and Mohammad Ali) and the images (especially crowns, of hair, of thorns and of royalty) that appear throughout his work and their meanings. It also examines how his work and imagery was so profoundly affected by music (especially Jazz, classical and hip-hop) and by his voluminous and varied reading (especially of the Gray’s Anatomy” textbook).

It discusses, and again shows his continual efforts to express and deal with contrasts, tensions and ambiguities, as between white and black people, rich and poor; and how his work evolved from literal, toward expressionistic portrayals. It also had one gallery devoted specifically to his mentorship by and collaboration with Andy Warhol: how Basquiet gained from Warhol’s fame and his technique and Warhol gained from Basquiet’s energy and spontaneity, and how they collaborated, typically with Warhol creating an initial image and Basquiet adding to, adapting or even painting over and deleting some of Warhol’s images. 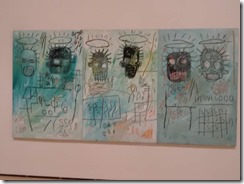 The exhibit concluded with showings and explanations of the New York hip-hop era documentary, Dowthown 81, in which Basquiet collaborated. It provides a fictionalized account of a day in his life at age 19 (before he was discovered) and an interview with him as well as friends and contemporaries including artist Keith Haring and singer Deborah Harry.

Overall, an amazing museum with exhibitions that provide as comprehensive and informative a view of the work of three important modern (two of whom are contemporary) artists as one could hope to see.