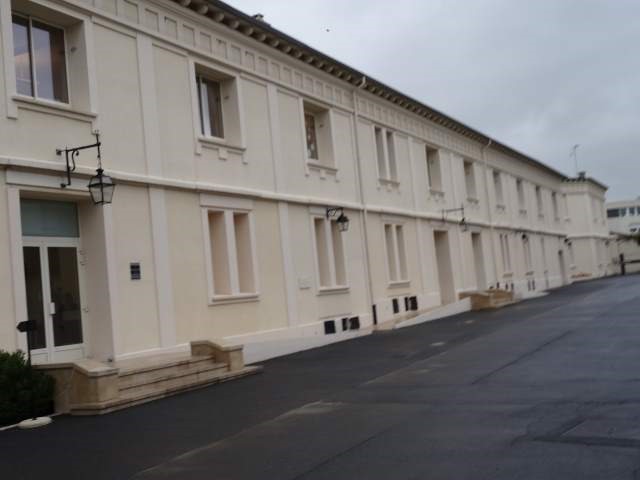 It has been many years since our last trip to the Champagne region of France. We would have liked (to take a few days to visit a number of small producers from around the region that we met at a recent San Francisco champagne tasting. But darn, we weren’t able to take that much time out of our time in Paris. Bu, we discovered that we could easily arrange a day trip from Paris to Reims, the capital of the Champagne region.

How easy is such a trip? Glad you asked. It is less than one-hour by train from Paris’s Gare de l’Est train station to downtown Reims and 30-45 minute walk to half a dozen Champagne houses, including Pommery, Taittenger and Veuve-Clicquot. Not exactly small family operations, but certainly very noteworthy producers.

And, as an added bonus, a walk from the station to these facilities takes you through downtown Reims and right to the huge, Reims Cathedral. As a result, we were able to tour one Champagne cave (Pommery), taste at four champagne houses (Pommery, Taittenger, Veuve-Clicquot and Demoiselle), have a wonderful lunch—with a full bottle of Champagne,  walk through the town and a visit to the cathedral—and still get back to Paris by 8:00 P.M.

The downsides of such a trip? Well, we do much prefer the U.S. tasting practice of getting small tastes of many wines to the French practice of purchasing full glasses to taste. But we struggled through. And since we were only able to arrange one standard tour of the caves.

But the good part is that we just happened to go on Tom’s birthday. There could be far less pleasant ways of noting yet another year on the calendar of life. But first, onto visiting some champagne houses

Our first stop was Taittenger, which was located in a large drab warehouse setting. Although we had reserved a tour weeks in advance, when we arrived we discovered that tours had been cancelled the day before when the boss scheduled a private VIP tour instead. Our initial anger turned to relief, as we realized that we didn’t really need multiple tours of champagne houses, and especially as they comped us each a glass of their Brut Reserve. The wine was 40% chardonnay, 35% Pinot Noir and 25% Pinot Meniere, with 3.5 years of aging (compared with 6 years for vintage and 10 years for the premium Comtes Blanc de Blanc).

We also got a chance to ask some questions and found out that Taittenger is “only” a mid-large sized producer with 6 million bottles per year, 80 percent of which are exported (primarily to England, the U.S. and Germany). We discussed how the grape composition is the single most important factor in contributing to the ultimate taste of the wine (with chardonnay providing fresh fruit, but also a sharper acidity, and Pinot Noir fuller, rounder flavors), with aging being the second most important. And, while recent, heavy mid-September rains, cold normally be problematic for the harvest, they have had little effect since the hot summer led to early maturation, and picking had begun in early September and was by now, almost complete.

This Brut Reserve, by the way, was one of our two favorite champagnes of the eight we tasted that day.

La Villa Demoiselle was next. It is affiliated with Pommery, but its grapes are sourced and wines are made separately. We decided to go upscale with this tasting, with the Diamonte Brut, which is 50% Pinot Noir, about 35% Chardonnay and 25% Pinot Meunier, all sourced from the winery’s six Grande Cru estates. It has been aged 15 months and contains eight percent sugar. Nice mineral and acidity, but not as full a taste as we expected from such as high percentage of Grand Cru Pinot Noir.

At Pommery, we did a cave tour. Although the standard tour is information light, introductory material in the waiting area does explain the production process from the blending of juice from different vineyards and years, the initial cellaring, the first fermentation and subsequent cold storage, the bottling and riddling process, the process of using the pressure of the gas to expel the yeast from the frozen neck of the bottle, the addition of the dosage, the corking and the final cellaring stage which can last from a year to 20 or more for the most select and vintage wines. It also had a HUGE beautifully-carved barrel that was previously used and could hold 100,000 bottles.

The tour began with a brief history of the winery. It was first established in 1858 as Pommery & Greno, then became owned by the Pommery family with the incredibly active hand by Madame Pommery, and her controversial decisions (such as the forgoing of currently favored sweet champagnes–approximately 150 grams of sugar per liter compared with six to eight grams in current bruts—in favor of a more purist approach).

After the 131 steps walk down into the caves, we learned how they were originally created as chalk mines (more than 300 of them) and how their consistent 10-degree Celsius temperatures are perfect for champagne. We heard of the dangers of the initial champagne production process, when up to 30% of bottles may explode (due to a combinations of untested methods and especially, weak bottles), injuring, blinding and even killing workers. In face, people would wear fencing masks to protect themselves in the caves. We saw all the different size bottles used for champagne (up through the 9-liter, 18-kilogram Salmanazar) and the large bottle aging cellars and were told, but did not see how the typically labor-intensive riddling process has been automated. And we saw the wall carvings that had been carved in the late 1800s, when the caves’ only light came from candles. The tour ended in outside the locked gate of Pommery’s Reserve Room, where commemoratory bootless are kept from each of the winery’s reserve years, dating back to 1874 (undrinkable per our guide, as champagne can’t last that long)..

After the 131-step walk back to the surface, came our tasting. We purchased tastes of three of the five different Brut wines being tasted to get a fuller understanding the range of the company’s offerings. These were:

Veuve-Clicquot, was our last stop where we tasted two Champagnes, a 2004 La Grande Dame and a 2004 Vintage Rose. (Since Champagne wineries bottle vintage wines only in extraordinary years, 2004 was first vintage year since 1998.) The Grande Dame is 64 percent Pinot Noir and 36 percent Chardonnay and has been aged for 10 years. The Rose 62 percent Pinot, with 15 percent of this from juice left to pick up the red color of the skins. It was aged for 9 years. The Grand Dame used to be one of our favorites for toasting in the new year. But after this trip, we will seek out Taittinger instead.

A Lunch Fit for a Birthday

We had lunch at Le Jardin, a lovely brasserie in the garden area of the five-star Les Crayeres resort. We were impressed from the moment we entered when a staff member rushed to open the door for us as they saw us walking up the path. The service remained at that level throughout of time there. It turned out to be a wonderful place for a two-hour lunch between Champagne tastings. We began with wonderful pan-fried foie gras with a sweet apple and fruit jam, followed by two equally impressive main dishes: seabass on leaks with a delicate champagne sauce (although the leeks slightly overpowered the fish) and veal rib steak crusted with melted Comte cheese. Then for the dilemma: What to drink with these dishes when you are in the middle of Champagne country and the wine list has dozens of different champagnes, many of which are priced between 60 and 70 euros? So we told the Sommelier what we were ordering and what we looked for in a champagne and asked his recommendations. After discussing a few, we settled on wonderful Comtesse de Ceres Premier Cru, which turned out to be one of our two favorite Champagnes of the day.

If you were counting, this put us at more than one bottle of Champagne per person in the course of a single day. It was a tough job. But we were only in Reims for a single day, and it was a birthday, and it was raining outside, and ….. In other words, it was an obligation that we just couldn’t shirk.

The City and the Cathedral

We did take time to walk through the center of the pleasant downtown and around and through the huge cathedral. The cathedral, which began in the year 407 AD, gained its massive, ornate entrance and its current form generally completed in the 13th century. Although certainly massive, it is not the most beautiful cathedral we have visited. Even though most of its windows are clear, rather than stained glass, the interior is dark and relatively uninviting. This being said it does have some pretty stained-glass windows, including a couple modern sets and even one by Marc Chagall.