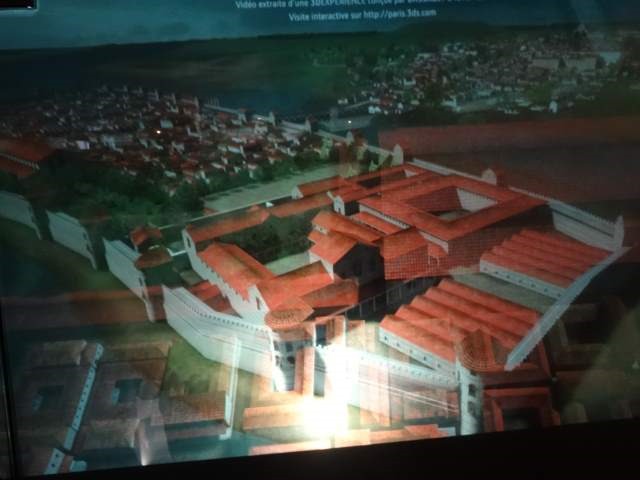 Crypte Archeologique, which is located at the spot on which Pairs was first settled (right by Notre Dame Cathedral), is loaded with history. The first and best place to learn about and to actually see remnants of its earliest history is in the site in which that history was created. Through 3D visualizations, it explains this history from the 1st century creation of the town of Lutetia, which began as a fortress and, over the next three centuries, grew into a 250 acre town, complete with a large forum and a covered amphitheater. While the town began to shrink and fall into disrepair in the 4th century, the Romans took over and rapidly enhanced and grew the city to about 200,000 people in the 1300s, by which time it was the largest city in Europe and the main crossroads for trade across Europe. The crypt also details the stages of the 100-year (1163 through 1250) construction of the Notre Dame Cathedral, which is at the other end of the same plaza as the Crypt. An interesting presentation of the city’s ancient history.

This mansion turned museum was the home of an art historian who donated his home and large collection of French Empire furniture and art and has since acquired a large collection of medieval religious illustrations. The primary reason we went, however, was for its amazing impressionist collection. First came a large donation by the son of Claude Monet that included not only a number of the painter’s own works (especially from his Giverney period), but also works by a number of other Impressionists. Then came a donation from heirs of fellow-Impressionist Berthe Morisot. The result: a display that, according to our count, over 40 Monet and 20 Morisot oil paintings, a number of Morisot sketches plus work by such artists as Renoir, Pissarro and Sisley.

Nor is it just the numbers that makes the collection so special. There is a draft oil of Caillebotte’s wonderful rainy Paris street scene (portraying the entire scene, without details, such as of the character’s clothes or their faces), many personal paintings of Morisot’s own family (especially of her daughter as she grew up) and some of Monet’s most famous works (Rouen Cathedral, Houses of Parliament, a number of his waterlilies series and the most beautiful Monet we had ever seen (and of which we were never aware): Impression—Sunrise.

Our only two regrets in visiting this museum: First, pictures are not allowed (but we couldn’t reside putting up a web-based image of Monet’s Sunrise.) Second. We missed, by a couple days, the opening of a temporary exhibit (Villa Flora) of the collection of a Swiss couple that includes works from artists including Van Gogh, Cezanne, Renoir, Matisse and Bonnard.

Fondation Le Corbusier is an organization dedicated to preserving the legacy of this ground-breaking urban planner and modernist architect. We visited one of the few existing Le Corbusier homes that are owned by the foundation and are open to the public. The 1925 La Roche house, designed on an awkward lot for a single man (and, based on the design, someone who obviously intended to remain single) who wanted a place to display his modern art collection, as well as having a place to live. The gallery is set off from the rest of the house and is linked to an office via a graceful ramp. Although some of the rooms are very sterile (and not only because of the lack of furniture), they are generally flooded with light due to the architect’s interesting use of natural light and indirect lighting.

Pierre and Marie Curie Museum explains the work that earned Pierre Curie, Marie Curie and their daughter Irene Nobel Prizes and led to incalculable breakthroughs in the treatment of cancer. It preserves Marie’s laboratory and office and displays many of the pieces of equipment used in the lab’s experiments. The museum describes Marie and Pierre’s work in isolating radium (which is one million times more radioactive than Uranium) and Pierre and Irene’s work in creating Polonium, the first artificial radioactive element. It focused particularly on the Curie Lab’s close collaboration with the Pasteur Medical Laboratory on identifying opportunists for using radium as a treatment for cancer. While radium had been used for topical treatments for several years, the joint work produced demonstrable progress in using radiation to treat deep tumors, such as in lung cancer. A small, but fascinating museum.

Zadkine Museum profiles the sculpture of Ossip Zadkine, a prominent member of the School of Paris, which was a group of foreign-borne artists who worked in Paris early in the 20th century. The museum, which is located in the artist’s former home and studio, contains a few dozen works, primarily in stone, but also some in wood and bronze. Most are generally abstract, somewhat primitivist and cubist representations of human figures or heads.

The foundation commissioned Frank Gehry to create a dramatic space to house commissioned contemporary art, host temporary exhibitions and stage small events. The building, located in the midst of the lovely Bois de Boulogne Park (see our Paris neighborhood post), is classic Gehry: a huge, aluminum-clad dome covered with glass wings, fronted by a stepped waterfall fed by a wading pool complete with a spurting fountain and a machine for creating a layer of dense fog.

The collection, less so. Its art is highlighted by five permanent commissioned pieces, the most interesting one, by far, which is the Olafur Eliasson light and space exhibit named grotto. It is a series of lit, bright yellow panels, followed by a series of mirrors, that line a corridor that runs alongside a streamed formed by water flowing from a reflecting pool that collects water flowing from the stepped waterfall. Another commission, designed by Ellsworth Kelly, is less engaging: a stage curtain consisting of five monochromatic panels, plus a number of square monochromatic panels mounted on walls of the auditorium. Very underwhelming!

The visiting exhibits were relatively few, considering the large space available to display them. Many of the rooms were closed and in most of those that were open, the exhibits and the viewers were given plenty of room. Many of the pieces were not quite to our taste and one, a long film clip with boring and repetitive music that could be heard through a number of galleries, was downright annoying. Another, a video exhibit caricaturing America’s fascination with guns, showed long, sustained gunfight sequences on screens on three sides of the room—with audios at high volume.

This having been said, we did enjoy some of the exhibits. Among our favorites:

The lobby has two other interesting installations: one, a number of suspended pieces that resembled tuna, prowling above the restaurant for their next meal. The second, which while firmly in the entryway, was easily missed until you reached a viewing point from a higher floor. That, a large and pretty red rose atop a long green stem.

This main floor of the museum (located in the Palais de Chaillot) maintains some of the city’s and the country’s architectural heritage that may otherwise be lost to development or a lack of money to maintain. It has an impressive collection of ancient sculptures (including the wonderful head of the Arc d’Triomphe’s “Call to Arms” frieze), historic 14th-17th-century church facades, doors and gargoyles, as well as columns, tombs and more. And don’t forget the wonderful collection of funerary figures (“the Mourners”) from the 15th-century tomb of John the Fearless, Duke of Burgundy.

The top floor is devoted to modern architecture. It explains and shows models, photos and video representations of buildings that were actually built, and particularly inspiring proposals. These ranged from innovative new homes, commercial and government buildings to repurposed structures that one would never imagine that it came from the original building.

We, however, came to the museum specifically for a special exhibit on contemporary stained glass windows from artists including Chagall, Matisse, Braque, Le Corbusier and Soulages. The exhibit, which had examples of 130 different works from 30 artists, began primarily in the post-WWII era, when churches and cathedrals were faced with decisions as to how to replace windows that were destroyed in the war. While recreating original images was virtually out of the question, many were reluctant to even consider contemporary work.

Once the decision was initially made, and new windows began to be installed by the mid-1950s, the rush began in earnest. New artists began creating windows that moved away from traditionally figurative designs, to symbolic and abstract designs. Many artists moved away from combining separate shards of different colors, to using enamels to paint on glass and then firing it to integrate the paint into the glass. Some etched glass with acid. Glass makers, meanwhile, developed new formulations and techniques to produce new effects, such as in the creation of undulating glass and materials with different levels of translucence to modulate the effect of light.