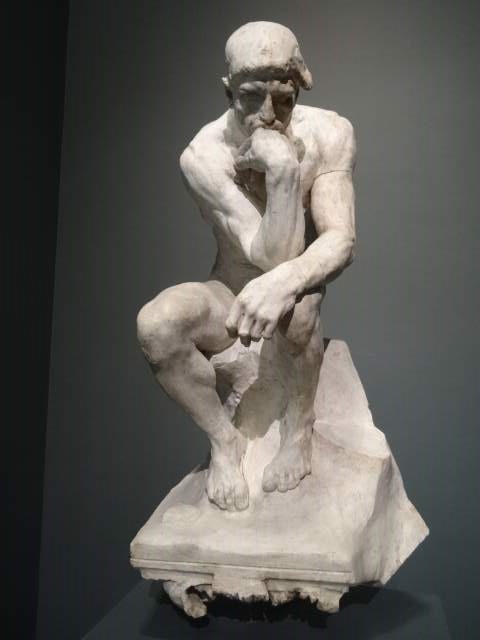 The Musee Rodin’s main building, the Hotel Biron, where Rodin lived, is now undergoing a much-needed renovation. Even so, the chapel and the garden, which contain many of Rodin’s sculptures, remains open. The current exhibition begins with an overview of the artist’s training—including his failing of the entrance exam to Ecoles des Beaux Arts—and his first views of work by Michelangelo, which provided an entirely new point of view and prompted him to create The Age of Bronze, such an anatomically correct representation that he was falsely charged with making a cast of an actual human, rather than of crafting a sculpture from start.

The chapel takes an interesting approach to not just displaying individual works, but of using combinations of photos, clay and plaster models and marble pieces to show how many of Rodin’s most iconic pieces evolved from concept, through multiple stages, and in some cases, though totally different concepts to become the finished works that we recognize today. It takes us through this process with pieces, such as tributes to Victor Hugo and Honore de Balzac, which were initially viewed as scandalous, and sometimes rejected by those who commissioned the work, that have since become iconic representations of these individuals.

His representations experienced the similar rejection when he delivered models for the incredibly powerful Burghers of Calais—six men who sacrificed their lives to save their townspeople at the end of the 100 Year War. His work was initially rejected for providing too personal and individualist representations of the heros. We were especially pleased that the museum chose the image of our personal favorite of these men (the heroic, defiant Jean d’Aire) to demonstrate the progress of this poignant piece. And all of these portrayals of the creative process became particularly compelling when you leave the chapel and enter the garden to see finished versions of these and many of the artist’s other works.

The very process of going through this stage—and particularly when you get to Rodin’s absolute masterwork—The Gates of Hell—do you see the creative process in action—synthesizing approaches developed in creating other works, and in many instances, recombining the same figures that were initially produced as standalone works, into totally new creations that are far more powerful and provide much greater insight than cold ever be possible from an individual work.

The mansion in which the Gallerie-Musee Baccarat and the Baccarat company headquarters is housed was originally built in the 19th-century for a countess who was heir to much of the Paribas banking fortune. It is indeed beautiful. The entry and walk up the grand staircase is, of course, lit by beautiful Baccarat chandeliers, and covered in a runner with embedded LED-lights. The grand ballroom has beautiful carvings, hand-painted ceiling mural and of course, a chandelier. Heck, even Baccarat’s restrooms are works of art—all mirrored glass and with each stall having its own crystal sconce.

The museum “experience” begins with a walk thorough a retail display room, in which you buy a ticket and pass a long table with displays of beautiful dinner settings, then through a room set up as an elegant bar that displays the company’s decanters, cocktail and wine glasses and even crystal espresso cups. Of course, everything is for sale at a price.

The actual museum experience begins one floor up with an introductory film (shown in the above-mentioned grand ballroom) on the history of the 250 year-old company (founded in 1764) and how everything is still made by hand, including individual glasses which still require contributions by six individual craftsmen (for blowing, cutting, engraving, inspecting and so forth). From here, we entered another formal dining room, this with originals of individual historical glasses (under glass domes to protect them) that were originally created as private commissions and have since been expanded into full commercial lines (which are displayed next to the original). Then into two additional rooms (one of which whose ceiling and walls is covered in beautifully painted canvas) in which a broad range of original designs are displayed in covered showcases.

This wouldn’t be at the top of our list but since we had time, it was absolutely beautiful.