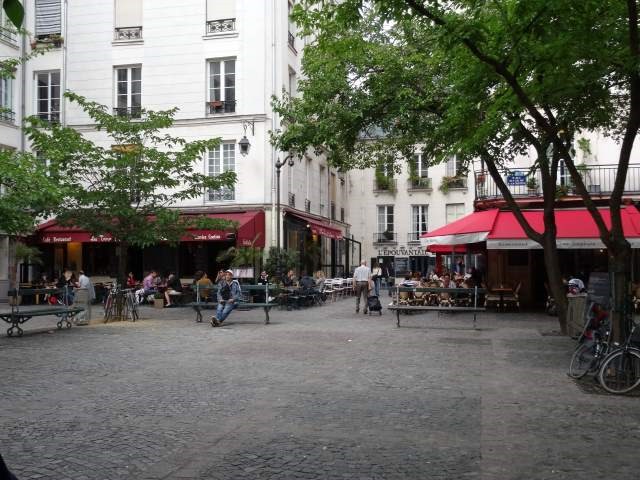 Every one of our Paris trips has ended too soon. This time we decided to rectify the situation by staying longer. Although we’ve enjoyed the Marais since we first began to explore it many years ago, our last two trips included two different tours of the Marais. This time we decided to make it our base for exploring a number of areas and sights in Paris to which we had not previously been or thoroughly explored, to revisit some of our favorites, to sample a number of restaurants and just to spend some evenings at “home” sampling and gorging on large selections of French cheeses, charcuterie, fois gras and wines at what in the U.S. would be considered to be insanely low prices or impossible to get.

We rented a nice apartment on a popular bar/restaurant-lined square just off the Rue de Rivoli (although from hindsight, we should have held out for a somewhat quieter, more residential street where people weren’t always smoking under our windows) and let our venture unfold. 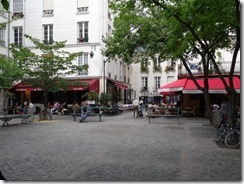 The Marais certainly has its share of attractions, from its historic mansions to the Place des Vosges, a pretty square, originally designed for use a royal horse walk, which is surrounded by colonnades which house cafes and galleries. A passage off one of the colonnades leads to the plaza of the grand Hotel du Sully. Off another, a passage to the elegant Court of the Queens.

The district also has a number of museums. It is home to three major ones: the Musee Carnavalet (Parisian history), and the totally renovated Musee Picasso (which is in the Hotel Sale, one of the most beautiful mansions in the city), and the Pompidou Center (which houses modern art). It a number of smaller museums. We were at the Carnavalet last year, the Picasso and Pompidou this year and Place des Vosges every time we are in town. (See our upcoming Paris Museum blog for discussions of his year’s major museum stops.)

But we also love just walking the streets, whether or not we have a have a particular destination.

Although many of the building are uninspired, some, such as those with large, elaborately carved wooden doors, and interesting combinations of buildings are quite pretty. Then there are the commercial streets, with cafes and small neighborhood restaurants intertwined with fashionable boutiques and tempting patisseries, chocolatiers and boulangeries. Meanwhile, every other street seems to have a mansion with a large courtyard or a small park. 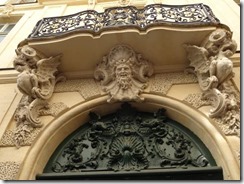 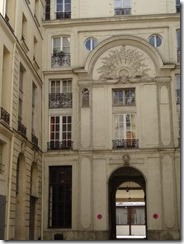 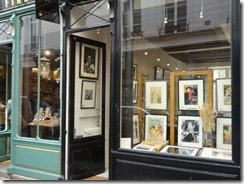 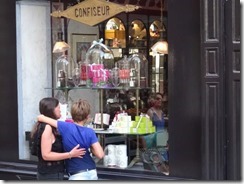 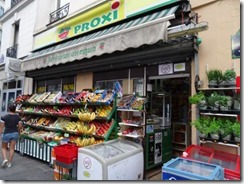 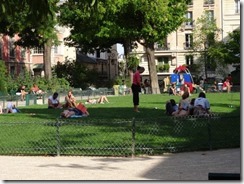 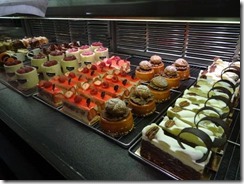 And then there is the always crowded Rue de Rosier, the center of the district’s Jewish section, filled with delis, falafel stands with long, long, lines, boutiques and especially on Sunday afternoons, street musicians that always seem to attract crowds.

So do some of the galleries. Especially two that staged complementary exhibits on a compelling segment of Americana. One of these traced the Kennedy family from the days in which the children were very young, through the Kennedy Presidency, Bobby’s run, Teddy’s role in the Senate, relationships with public figures ranging from Martin Luther King to Frank Sinatra and mafioso Sam Giancana, and of course the family tragedies. More interestingly (especially since it contained so many candid, unposed photos) was the exhibit that focused on John and Jackie, beginning with each of their childhoods, through their courtship and marriage, the assassination and Jackie’s life after John’s death. 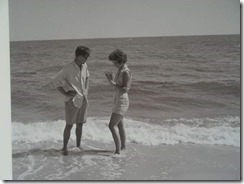 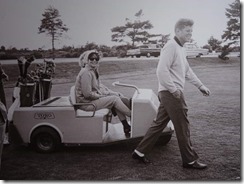 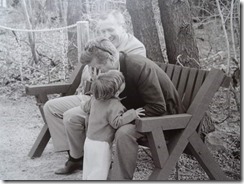 And then are some of the more quirky things that make the Marais (and Paris) special. While it certainly has history, culture and prosperity, it does not take itself too seriously. Examples of its humor are evident in humorous wall art and plaques that just happen to pop up every now and then. 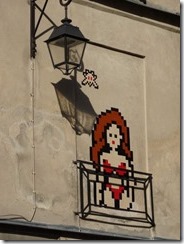 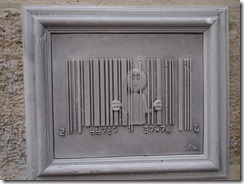 Even though we were staying in the area and have previously taken two Paris Walks tours of the Marais District on previous trips we still wanted to learn more. This year, we decided on a slightly different walk from a different company, Discover Walks’ tour of the “Trendy Marais”.

The tour took us through many of the more atmospheric eastern portions of the Marias. After an overview of the July 14, 1789 events at the Bastille (which no longer exists) and the largely symbolic release of all seven prisoners from the massive prison to which the king could arbitrarily send his enemies, we saw the homes of and heard the stories of some of its more notable and notorious residents, including a former French finance minister/author/physician who invented the concept of copyrights and who had a habit of marrying rich, older women who all mysteriously died shortly after their marriages—leaving the vast majority wealth to him. (He was tried a couple times, but never convicted.)

Although the tour was nowhere near as comprehensive, or historically detailed as our previous tours, we learned how the old royal mansions, created by wealthy aristocrats in the 14th century after King Charles V built his mansion and established his royal court in the neighborhood. It really began to take off after the early 17th century when King Henri IV built the beautiful Place des Vosges and nobles built their own mansions, including Hotel Carnavalet, Hotel de Sens, and Hotel de Sully, the latter of which was allowed so close to the royal square as to be directly accessible via a discrete passageway. 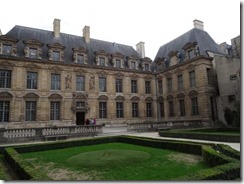 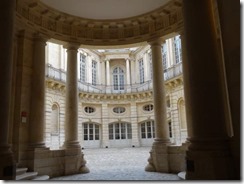 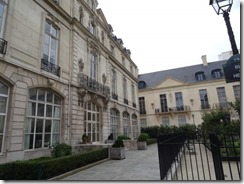 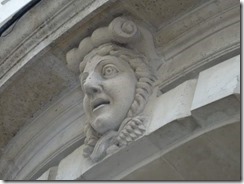 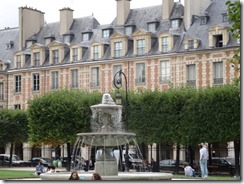 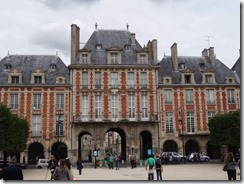 We saw and learned of the almost perfect symmetry of Place des Vosges and how the largest buildings on opposite ends of the squares were the King’s and Queen’s entrances. And then there were the special enhancements added around the exits to the square—domes built into the corners so that men attempting to urinate would spray their legs and their feet. We need some of these in San Francisco! 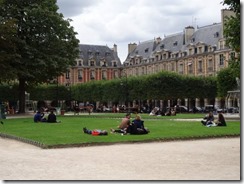 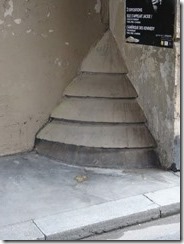 While in the square, we also learned of the two tragedies that occurred on the square before Henry IV gave the square its current design. The first was when Henri II hosted a large party for his daughter and, in a joust, a splinter from a broken lance lodged into his brain and he ended up dying. Then, a decade later, an actor, reenacting the event, suffered a similar fate—this time the fatal sliver lodge in his eye.

By the 18th century, the King and nobility had left the neighborhood and it became home to tradespeople and by the late 19th century, increasingly Eastern European Jews—before being forced out by the Nazis in WWII. By the end of the war, the area had fallen into disrepair. This began to change in 1964 when Andre Malroux, President DeGaulle’s cultural minister, launched an effort to protect and rejuvenate places of special cultural significance.

The Marias has since become one of the most desirable districts in the city. Most of the older mansions have been restored, often converted into condos or apartments. The largest, most prestigious ones have been converted into museums or public buildings. Less distinguished buildings and those beyond redemption have been torn down and replaced by newer apartments, standing side-by-side with historical mansions, with conveniences and other stores sandwiched in between. The residents of tis now desirable neighborhood, according to our guide, are of four general categories: gays, artists, Jews and “BoBos”, or Bourgeois Bohemians (which, according to the Oxford Online Dictionary, is a person having both the values of the counterculture of the 1960s and the materialism of the 1980s).

And Place des Vosges, in particular? It has become one of the most prestigious addresses in the city, attracting upscale galleries, boutiques, cafes and residences of the rich and famous, including the infamous Dominique Strauss-Kahn, a former IMF Managing Director, French presidential candidate and most recently, notorious sex addict.

Then after a couple more mansion stops, and one at Place St-Catherine, another lovely square, the tour ended on Rue Rosier which, as discussed above, is the center of the Jewish community, home to delis and falafel stands and to Goldenberg Deli which, despite its current name, is now a clothing boutique. The deli, as we learned, ended up closing after a 1982 mass shooting in which a terrorist attack killed 6 and injured 22. As one might expect, security is high in this are with an obvious police/security presence who were watching everything, but not obtrusive.

On the southern edge of the district, along the main drag of Rue de Rivoli, is the huge, but nicely decorated Hotel de Ville, which when we visited, had an interesting outdoor exhibit celebrating the 40th anniversary of the 1944 Liberation of Paris and the 1945 end of the War with Japan with a display of front pages of Parisian newspapers highlighting events from the invasion of Normandy, to the liberation of Paris, Hitler’s suicide, the German surrender, the dropping of the two bombs on Japan and the country’s surrender. 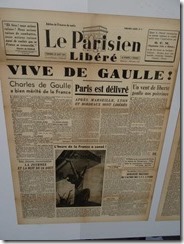 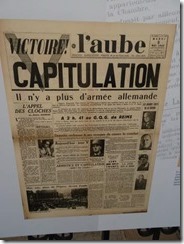 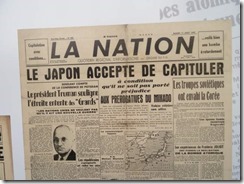 And just beyond that, before entering the central district near the Louvre and the Palais Royale, is the Gothic Tour St-Jacque, the tower from which philosopher/scientist Blaise Pascal performed experiments on the nature of barometric pressure.

Then there’s the other side of the Marais—the western corner with neighborhood’s small Chinatown section, the Pompidou Center (discussed in our Paris Museums posts), the solemn, but lovely Gothic/Renaissance St-Eustache church (and as a counterpoint to the solemnity of the beautiful church, a Henri de Miller sculpture alongside it). Then across a small park, the Paris Borse, with its great dome.

Then, for something totally different: the Forum Les Halles, a huge, 750,000 sq ft underground shopping complex that is filled with all the types of stores one would expect in a big shopping mall. While the three-level underground complex was topped be a park and gardens, there was apparently a need for many more new chain stores, chain restaurants and chain hotels. The complex is now undergoing a huge construction project that will add hundreds of thousands of additional square feet that will add several stories atop Les Halles.

Our next blog talks about entertainment and food in the Marais