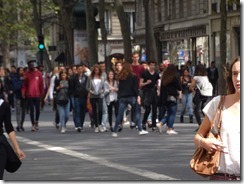 We’ve been to Paris a number of times—both together and Joyce was there multiple times while in school (both high school and in college). It continues to be one of our favorite cities. And why not? It is one of those magical cities—along with New York, San Francisco, Kyoto and a few others. The food, the wine, the cheese, the history. We still remember one of our French friends telling us that his house was older than our country. And that was when we lived in Boston in a place built in 1890. It kind of puts things into perspective.

On this trip to Paris, we rented an apartment for almost a month in the 3rd arrondisement (the Marais district). Rather than stay at a hotel, we wanted to live Paris. And as you will see from the upcoming blogs, we lived Paris.

This blog provides our general perceptions of Paris and how it has changed. Future blogs detail museums, neighborhoods, food, day trips and more.

Yes, Paris still has the magic, the history, the beautiful old buildings, the culture, the food, the wine, the little winding streets and so much more. But like most places, it has changed—at least in our eyes–in some big ways. Among the biggest are:

Although some things are changing in Paris, others seem to remain the same. One such area of consistency is the French proclivity for protest. Two days after we arrived, cars were being warned to stay off the streets in two days since farmers from around the country were driving tractors into Paris with the intention of blocking many intersections. Although we did not see evidence of his demonstration, we did see two other demonstrations—both apparently revolving around the immigration of political refugees. 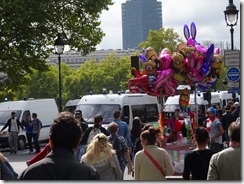 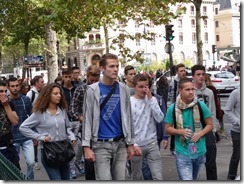 According to one of our guides, this was just the beginning. He explained that September is one of the country’s traditional strike months. The country’s pitifully slow growth rates makes it tough for any organization to grant significant raises. And this results in a number of critical services, including subway workers, teachers and even hospital workers to have already scheduled their protests. Not that such protests usually amount to much. Nor are they likely to result in much dramatic political, much less violent action. According to the guide, people love to demonstrate, but they much prefer sitting down to argue about issues over a glass of wine than they do act on their convictions.

Ah Paris. Come join our exploration of this wonderful city in our upcoming blogs.