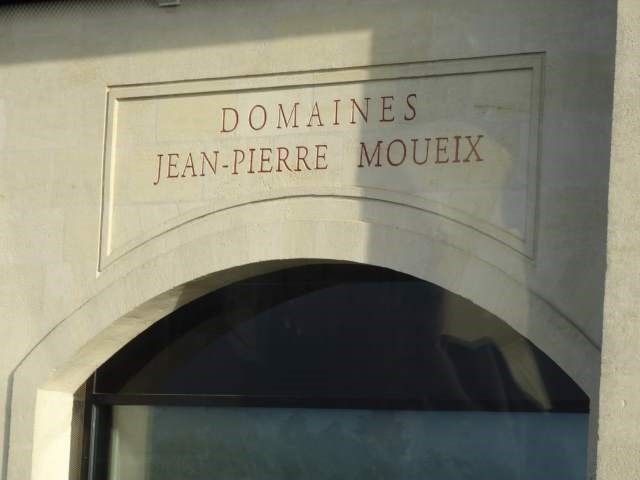 Day 5 of our Bordeaux Grand Cru Harvest Tour, again started with our standard French breakfast of delicious croissants, yogurt and fruit at Château Coulon Laurensac. Then we boarded the bus with our host, Ronald Rens, to spend this day in the premier Right Bank districts of Saint Emilion and Pomerol, where the terroir is totally different from Left Bank and the Southern areas of Bordeaux. First it has very different soil, with huge underground limestone deposits (which is riddled with underground tunnels created by the quarrying of limestone). This limestone is covered by four to eight meters of clay, which makes the Right Bank much better suited to Merlot than to Cabernet and so contributes to the wine’s unique character. Most wineries also grow Cabernet Franc and secondarily, Cabernet Sauvignon as blending grapes.

While most of the region shares these same features, some segments are unique. This is especially so for the older, deeper, bluish, iron-rich clay atop the hill in Pomerol—the space occupied by the most exclusive and sought after Right Bank wine of all—Chateau Petrus. This is a winery that, while everybody knows it, virtually nobody gets to visit. Their nondescript buildings are marked only by the names of the owners (the Moeiux family) and marked by the crossed keys of St. Peter. Nor is its phone number listed.

The Right Bank also differs from the Left in how it classifies its wines. Left Bank classifications, as discussed in our Left Bank post, were generally granted only once (in 1855), in perpetuity, for the chateau’s label. Right Bank classifications, by contrast, can be granted and taken away for ten year periods and are granted only to a specific vineyard. That, at least is the theory. In practice, according to Ronald, the system doesn’t always work that way. Like the Left Bank, however, it also has hundreds of mostly small (as small as five acre) vineyards/wineries of only which a few dozen produce notable wines.

We toured and tasted at one Right Bank Pomerol winery.

Chateau Gazin has a small (26 hectare) vineyard and small (100,000 bottles under one label) production. Merlot currently accounts for about 90% of its production and sometimes (as in 2013) 100% of the grapes in its wine. This reliance on Merlot, however, is causing problems. First, an overreliance on a single varietal limits the level of complexity of its wines. Second, the increasingly hot summers (due to global warming) have caused alcohol levels to rise a full percentage point (from about 13.5 to 14.5 percent) over the last decade. Gazin has, therefore, pulled out some of its older Merlot vines, and has temporary left the plot to bloom with wildflowers until it replants it with Cabernet Franc, with the hope that Cabernet Franc (and to a lesser extent Cabernet Sauvignon, which is hard to bring to maturity in clay soil) will account for 15 to 20% of its production. It, like a number of other Right Bank wineries, now use concrete vats for primary fermentation and oak barrels for secondary fermentation (using stainless steel tanks only for blending and storage). After a tour, we tasted only one wine there, Château Gazin 2013, AOC Pomerol, of which the acid is too pronounced for our tastes. 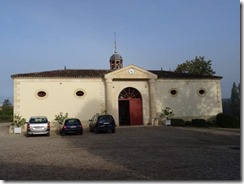 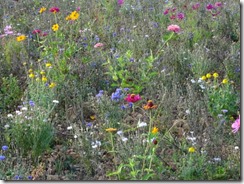 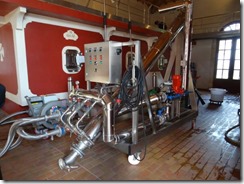 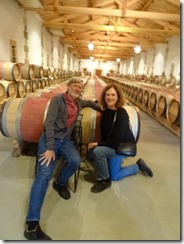 In Saint Emilion most of the other 1er Grand Cru Classe and First Growth wineries (such as Ausone, Canon and Angelus) are located on the slopes of the hill on which Saint Emilion is nested.

Chateau Angelus is a beautiful complex topped by 14 bells which not only chime the hour, but also welcome guests with their pre-programmed national anthems. It is much larger than Chateau Gazin, with 27 classified hectares for its 1er Grand Cru Classe Chateau Angelus first label, and 13 unclassified hectares (for their second wine, the Carillion de Angelus). It’s planting is also much more diversified, with 50% Merlot, 47% Cabernet Franc and 3% Cabernet Sauvignon. We arrived in time for the first day of its Merlot harvest. We tasted two of its wines, both of which we thoroughly enjoyed. The first was from a property right across from Angelus: Château Bellevue 2011, Grand Cru Classé, AOC Saint Emilion Grand Cru, (100% Merlot, 20 months in new French oak) is a veritable steal at 70 Euros. Its flagship Château Angélus 2010, 1e Grand Cru Classé “A”, AOC Saint Emilion Grand Cru (55% Merlot and 45% Cabernet Franc for body and finesse, which also spends 20 months in new French oak) is priced as the premium wine that it is at 340 Euros.

But just because we went to only two wineries does not mean that we tasted only three Right Bank wines. Our final stop of the day was a wine shop with a huge selection of Bordeaux wine. Ronald’s favorite store is located in St. Emillion. This is a wine connoisseur’s wine store, carrying hundreds of brands of Bordeaux wines of vintages old and young. The store’s extremely knowledgeable manager guided us through a tasting of ten right bank wines (seven reds and three whites), ranging from the 2001 vintage through 2012 for reds and 2013 and 2014 for whites. A number of the reds have great potential. These include Chateau Monbousquet 2009, Clos de La Vielle Eglise 2012, Tertre Roteboeuf 2011 and Clos Dubreuil 2012. We also enjoyed a surprising white (Puy Redon 2013 Chardonnay, which is grown 40 km east of St. Emillion).

And how could we walk away without buying some wine? With shipping at 90 euros for the first case and 170 euros for 2 cases, plus $20 per case for customs, we (as well as most of the others on our tour) did some serious damage to our credit cards. Ronald expertly guided each of us to choose wines that fit our budgets and tastes to be shipped to us. We ended up with a mixed case from the Right Bank and a mixed case from the Left Bank.  From the looks of the stacks of cases of wine waiting to be shipped out, it looked like the shop did a great business with tourists.  Still, we walked away with what we think are great deals thanks to the strong dollar versus the euro and Ronald’s help.

And of course, since we were in St. Emillion at lunchtime, Ronald arranged lunch at Le Tertre, where we could select from three appetizers, three main dishes and three desserts (We really like that we always had choices when we went to restaurants on our tour). We both began with snails a la Bordelaise (with ham and sausage in a light red sauce) which we both enjoyed. Tom liked his duck breast with raspberry and blackcurrant sauce and balsamic vinegar (although the “sauce” was actually more of a “smear” than a sauce). And speaking of a smear, Joyce’s coq au vin with spaetzli was served (and from the taste, was cooked) with almost no liquid. It was dry and tasteless, even after she asked for additional sauce (the sauce was thin and somewhat tasteless). Perhaps it is the style in St. Emillion, but it isn’t like any coq au vin that Joyce has ever made (which she had made numerous times) or eaten before. Five of the 6 people at our table had it. One person enjoyed it. The rest of us were disappointed. We had better luck with the desserts: coffee crème brulee with cappuccino ice cream, and chocolate fondant flavored with earl grey tea and chocolate and tea crumble. The two St. Emilion wines were good, but not memorable. But think about this. Good St. Emillion wines are good wines. These were Chateau Haut Segottes 2009, AOC Saint Emilion Grand Cru  and Chateau Fonbel 2009, AOC Saint Emilion Grand Cru.

We also had time for a brief stroll through the charming small World Heritage Site old town, with its fortress ruins, lovely church and cloisters, steep, cobbled streets and main square and its dozens of wine stores. The town, in addition to its charm, is also notable for its bell tower built atop an underground church (named, of course, for St. Emilion), which in turn is built atop a limestone quarry that underlies much of the town. The bell tower, in danger of collapsing due to too much mining of limestone, had to be shored up in a UNESCO-funded operation.

We then returned to Chateau Coulon Laurensac for a four-course farewell dinner in the beautiful dining room. Sadly, it was our last night on our tour. But we were looking forward to what treats Ronald would pull out of his cellar as well as tasting some of the special U.S. wines that were brought by some of our fellow travelers who had extensive wine cellars. The dinner started on the outside patio with appetizers and Ronald’s decapitating of a magnum of Champagne Bollinger Spéciale Cuvée, AOC Champagne, from Magnum with his sword. We’ve seen this done only once before but he did so well. Too quick to get a good picture.

We then moved inside to a sit-down dinner prepared by a local chef. The main dish, Rossini-style duck breast, was overcooked for our tastes. But we have found that the French like their foods cooked way too much for American tastes. We also had cheese (a very nice sheep cheese from the Pyrenees) and a nice cheesecake with fruit.

But the focus was on the wine. And boy, was there wine! First we were served the wines the guests brought. Ronald then raided his own extraordinary cellar. The procession ended at a count of 13 bottles for 13 people. Thank goodness no one was driving. First were the wines brought by others:

OMG. A hell of a finale to an extraordinary week in which we learned about, saw and experienced the wonders of Bordeaux wines (including tastes of all the Premier Cru Classe wines), the expressions of its food (especially in our two amazing winery lunches– Prieure Lichine and Chateau Haut Bailly) and its hospitality, especially of Ronald and Margaret Rens at Chateau Coulon Laurensac’s Bordeaux Wine Experience.

Since there is no way to top this dinner, we retired to bed hoping to dream of returning some day.