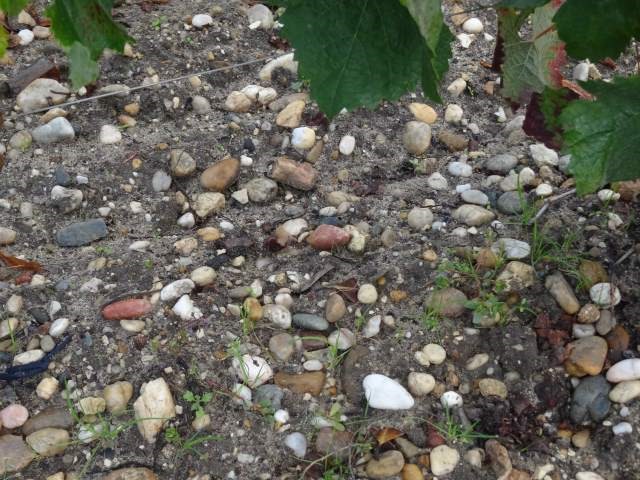 Day 4 of our Bordeaux Grand Cru Harvest Tour, again started with our standard French breakfast at Château Coulon Laurensac. When the croissants are this good, how am I not going to gain weight!

Then we boarded our bus along with our very knowledgeable and personable host, Ronald Rens, to take us through Pessac-Léognan in the Graves and then south in Sauternes country for three more premier winery visits and tastings, not to speak of a wonderful lunch and then dinner at a Michelin-starred restaurant. Going back to the real world is going to be hard….

Chateau Haut Brion/La Mission Haut Brion, the oldest (16th century), the smallest and probably the most innovative of Bordeaux’s First Growth wineries. For example, it was the first to top-off and rack its wines and the first to move to all stainless steel tanks. The company also has its own cooper and produces most of the barrels for its red wines (although not its whites), toasting all to a light-medium. As Graves is a very gravelly area and is the warmest of the Bordeaux regions, it is typically the first to pick its grapes. The Haut Brion estate is separated from La Mission by a road, and the wines are so different from each, that they are sold under different labels.

Chateau Haut Bailly, a Classified Growth that is also from the Graves (the Pessac-Léognan region) that, with their position at the top of a hill, provides its grapes with better access to wind and better drainage. And the grapes near the bottom of the vines get an even greater benefit of being close to the gravel, which retain and give off heat in the evening, when grapes higher on the vine have already cooled down. At the winery, we watched them bring grapes in from the harvest, and toured the wine-making facilities and the cellars. Unlike the case with other wineries, Haut Bailly relies exclusively on concrete tanks for the first fermentation process and then does the second fermentation in the same wooden barrels in which the wine is aged. Stainless steel tanks are used only for blending.

But then came the real treat—lunch at Chateau Haut Bailly’s private dining room, with Chef Jean Charles Boisson, one of the region’s new breed of top chef (who is not eligible for a Michelin star since he cooks in a chateau, not open to the general public) who prepared an absolutely wonderful meal. Our lunch experience began in the chateau’s parlor with Champagne Pol Roger, Extra Cuvée de Reserve, AOC Champagne and three very good, very interesting (not to speak of very pretty) amuse bouches. We then adjourned to the dining room where we were treated to a delicious four-course lunch, paired with three of the wineries wines. Every dish was absolutely delicious, as well as artistic and the service was first class. We began with a foie gras and morel ravioli in a mushroom reduction, finished with small foie gras squares and baby morels, accompanied by a very affordable fruit-based La Parde de Haut Bailly 2011, AOC Pessac-Léognan.

The main course was pigeon and roasted figs in a concentrated poultry gravy with a nice, agreeable Chateau Haut Bailly 2008, Grand Cru Classé, AOC Pessac-Léognan. Then came the cheese course, which included a very good, shaved, flower-like arrangement of Tete de Moine cheese accompanied by Chateau Haut Bailly 2007, Grand Cru Classé, AOC Pessac-Léognan. We finished with another phenomenal dish, Cremeux chocolat with coffee emulsion, accompanied by coffee or tea. A wonderful experience and did we mention it was an incredible meal? This was truly the best meal of the tour. But we still had one place to visit: Chateau d’Yquem.

Chateau d’Yquem is Bordeaux’s highest classified winery, producing the “Nectar of the Gods” —the only Premier Grand Cru Classé Supérieur Sauternes wines made primarily from Sauvignon Blanc and Semillon, (in Sauternes typically with a little Muscadele, but not so at Yquem) are grown in the most humid area of the Bordeaux region. They get early morning mist from the relatively cool Ciron river feeding into the warmer Garonne, which facilitates the growth of Botrytis, the so-called Noble Rot, which punctures the skin, pulls water from the grape and creates a very, very concentrated juice with an added distinct flavor from the botrytis. The humidity allows the grapes to mature very slowly and botrytis forms only late in the season. And, since the grapes are not harvest until they have a very high sugar content, the first wave of picking may not begin until late September. Even then, harvest is all done by hand, grape-by-grape, rather than by the cluster. And it proceeds in waves, which can begin in September and in some years, last until Christmas. Picking is not done until the grapes reach the sugar level required to produce a potential alcohol level of 20 percent—approximately 40 brix.

What happens if Botrytis doesn’t develop properly; if the Noble rot turns into unpleasant acid or gray rot; or if rain, hail or snow destroys some of the grapes? Then the vintage can be lost completely (as it was in 2012, or an average of about one vintage per decade), or the yield (which is typically one glass per vine, compared with about a bottle per vine for Medoc or St. Emilion wines) can fall even further. Average yield, is only about seven to eight hectoliters per hectare, compared with 45 hectoliter government-mandated maximums (and 42-43 actuals) for many non-dessert Bordeaux wines. No wonder Chateau d’Yquem is so expensive.

How do they ensure that each vine, cluster and grape gets the TLC it deserves? Since the weather is impossible to control, they try to control every other part of the process. One person is responsible for tending a designated segment of the vineyard for the entire year. Even more obsessively, they own the cattle whose manure is used for fertilizer (to make sure the cattle eat and live right to produce the right manure)—and the grass that is used to produce the hay eaten by the cattle.

Once the grapes are harvested, and hand-inspected twice for quality, they are put into oak barrels (100 new barrels) for two years—both for the first and second fermentations, and kept there for two years, before going into a bottle. During this period, each barrel is continually checked for quality (and discarded if it doesn’t meet standards), and goes through two blending processes. After touring the beautiful grounds atop the hill (with other Grand Cru Sauterne producers surrounding d’Yquem on lower slopes of the hill), being awed by the fortress-like chateau and touring the winery, we were more than prepared for a tasting. Our guide chose a Chateau d’Yquem 2005, 1e Grand Cru Classé Supérieur, AOC Sauternes (670 E per bottle) where, in the first nose, we smelled honey, vanilla and apricot; evolving to caramel, pineapple, apricot and honeysuckle in the second nose. The taste confirmed these aromas along with a unique mushroomy taste imparted by the Botrytis.

And what if you prefer a dry white wine to a sweet dessert wine? Chateaux d’Yquem also offers a dry white wine (named “Y”) that typically consists of about 75% Sauvignon Blanc and 25% Semillon—compared to the inverse for Chateau d’Yquem. 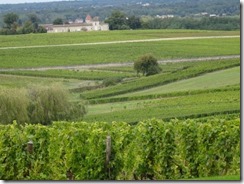 After a brief stop at our chateau (where we tried walking around in vain to work off calories from our lunch) we headed back into the city for dinner at what is supposed to be the best restaurant in the Bordeaux area (actually it was in the town of Bouliac); the Michelin-starred Le Saint James, known as the “balcony of Bordeaux” for its panoramic views. It is presided over by Nicolas Magie, who provides a highly individualized interpretation and presentation of classics from the Aquitaine. We enjoyed a four-course dinner, with each course paired with wine (of course). We began with a tasty amuse bouche of a deep-fried escargot with anise cream sauce, followed with foie gras with smoked fig leaves, figs, and hazelnuts paired with Chateau Chantegrive 2012 (Blanc), AOC Graves. The next course was pan-fried sea bass in vodka butter with crab/caviar balls, cabbage flowers and lime (with the same wine), followed with roasted veal (and parsley-lemon, compressed pear and a celery mixture) served with Mademoiselle “L” 2012 par Chateau La Lagune, AOC Haut Medoc. Then came a two-part dessert: A pretty good cold currant crunchy tart and salty caramel, chocolate and supposedly blueberries (which none of us could find), and a Sauternes dessert wine (Chateau Doisy-Dubroca 2010, 2er Grand Cru Classé, AOC Sauternes). While the food was generally good, it barely compared with lunch. In itself, nothing could compare to lunch so this may not be entirely fair. But we did feel that the staff seemed somewhat amateurish and needing some training. Nice try, but Chateau Haut Bailly won by a unanimous decision!

The wines we tasted this day are: