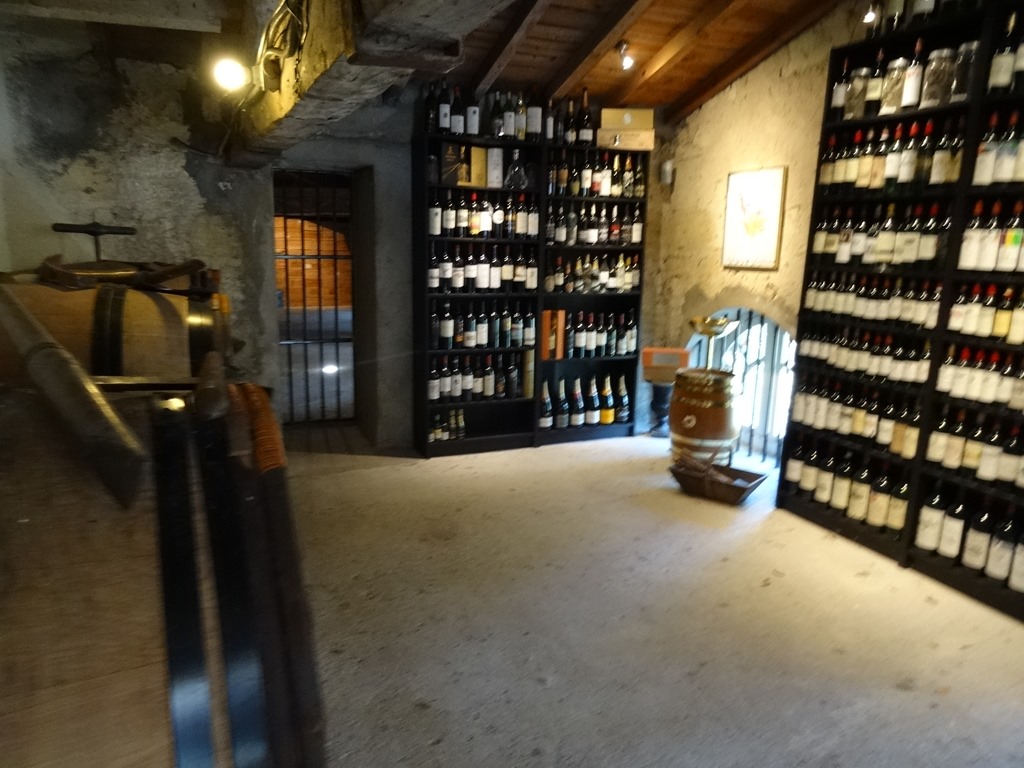 Now that we were in Bordeaux and checked into Château Coulon Laurensac, and given a welcome glass of Jean Louis Ballarin Brut, AOC Crémant de Bordeaux to get our taste buds ready for wine, we were ready to start our Bordeaux Grand Cru Harvest Tour, put on by The Bordeaux Wine Experience.

The tour began at 4:30 PM, with a tour of the chateau’s own wine cellar and an introduction to Grand Cru wines. The cellar tour began with a discussion of the foundations, complexity, and inflexibility of the Bordeaux appellation and classification systems and how these systems differ among appellations, even within Bordeaux. Our host Ronald Rens explained (in easy-to-understand laymen’s terms) the complex system of classifying wines of the region.

We learned how it is impossible for producers who have won the prized classification in 1855 to lose their level (since legacy classifications in Medoc, unlike in St Emillion, cannot be taken away) and how difficult it is for lower classified wines to gain recognition for improved quality. How the clay soil in Pomerol so favors merlot and how the gravel in the lower Medoc peninsula differs from that in the upper peninsula and how that affects the tastes of the wines (with lower peninsula cabernets being a bit softer and more feminine than those in the upper peninsula). But, for all the focus on appellations and classifications, only about 200 of the more than 10,000 total Bordeaux producers have any classification at all.

Ronald then talked about his own cellar and gave us a tour. Wow, what a cellar. He discussed what types of wines he buys and cellars and why, and then identified a number of specific bottles that are either of historical note or had particular personal importance to him.

With this foundation, we moved on to the dining area and sat down for a discussions of additional factors such as the differences among Bordeaux vintages, what made some vintages better than others and how the judgments of vintages can change over the years. He then provided an overview of the primary differences between cabernets and merlots and then helped us hone our identification skills by taking us through a series of blind tastings first taking us through a process for identifying cabernet versus merlot—and the impact that mixing them together has on taste and complexity. We then did a blind tasting of a 60/40 Cabernet/Merlot Right Bank blend from a 40/60 Cabernet/Merlot Left Bank blend; and then, with two other wines, identifying not only the region, but also assessing the approximate vintage of each.

Then, we discovered how cheese affects the taste of wine (with the proteins of the cheese masking the flaws in the wine) and were advised of a Bordeaux maxim that you should buy wine after eating apples (the acidity amplifies the tastes and flaws of the wine) and sell wine after serving cheese (to mask the flaws).

After all of this hard work <not> of tasting and identifying wines, we were served a dinner of selected cheeses and charcuteries with which we drank increasingly nice wines from Ronald’s cellar—culminating in an incredibly complex, beautiful Chateau Saint Pierre 1989, 4e Grand Cru Classé, AOC Saint Julien. But wait, there’s more. We had dessert with an absolutely amazing Alvear Pedro Xeminez 1927, Dulce Viejo, Denominacion de Origen (a PX Alvear wine from Pedro Ximenex grapes from Cordoba Spain).

In summary, today’s wines were:

A very instructive first day that provided a very encouraging hint of the learning process and the great types of wines we would experience over the next few days.