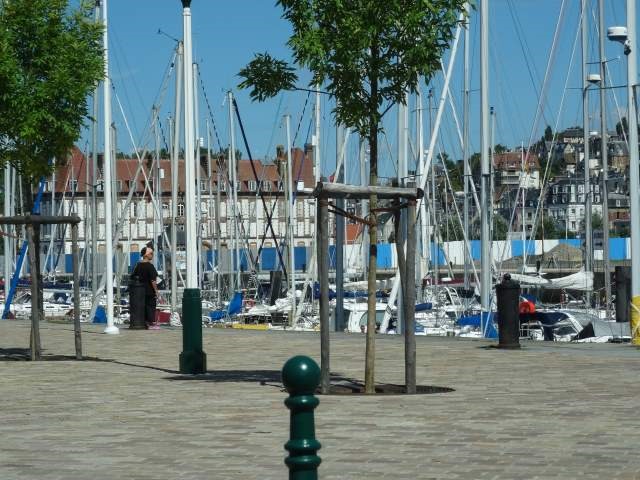 As we continued our journey through Normandy, France, we drove straight west from Rouen for a jaunt through the resort town of Deauville, with its yacht harbor, beaches, casino and grand beachfront hotels. Very beautiful with the blue skies and water. 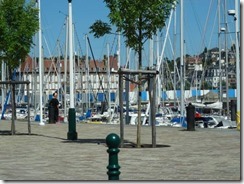 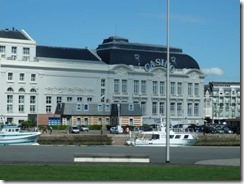 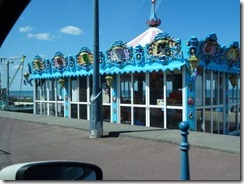 We then proceeded south along the coast, through a number of less glamorous beach towns and then down to Caen. Old town Caen, while mostly modernized, retains a few ancient landmarks, a handful of restored buildings and a handful of still atmospheric streets. Among the highlights were the: 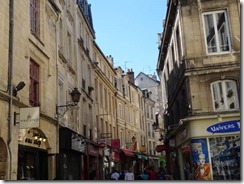 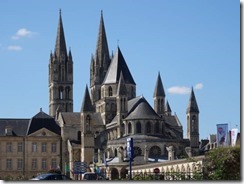 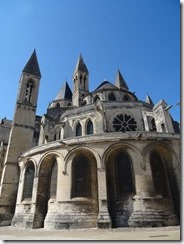 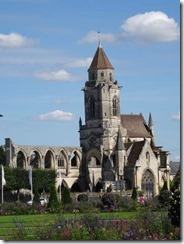 Next up was Bayeux. The old town is pretty, especially along the river, down its central streets and around the 15th-century Notre Dame Cathedral. 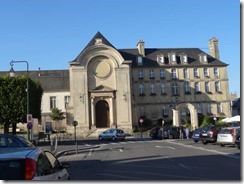 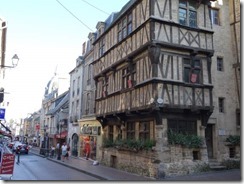 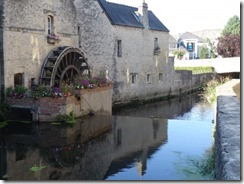 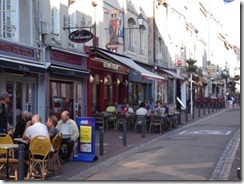 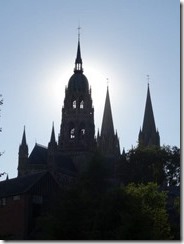 The primary draws for us, however, were the: 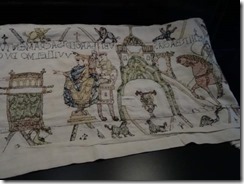 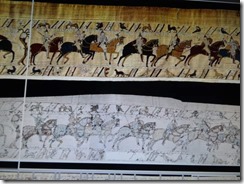 After the grounding that Bayeau’s Battle of Normandy Memorial and Museum provided of Operation Overloard, D-Day, its preparation and aftermath, we were ready to explore some of the actual sites. Although the landing zone consists of five separate beaches (Utah, Omaha, Gold, Juno and Sword) spread over 50 miles, we focused on two:

Omaha Beach is the site of the primary June 6 assault by Americans, many of whom died on that day. Today, the actual beach is beautiful and is used for recreation. However, the cliffs above the beach are occupied by an American Cemetery and Memorial Site. Its first site contains a monument to the First Division, which was the first on the beach and suffered the most casualties. It also has one of the beach’s three German bunkers open for viewing (you can climb down into the space if you want) and describes the provisioning of the beaches (mines and metal and concrete obstacles) and the bunkers—31 German soldiers fully provisioned with machine guns, anti-tank guns, mortars and anti-aircraft guns.

The second Omaha Beach site is the location of the American museum, memorial and cemetery (those buried include soldiers that died on the site as well as Americans killed in combat in other locations, whose families agreed to have their relatives buried in this cemetery). The museum tells the story of Operation Overload through a narrative, statistics and a number of personal stories.

The museum explains the broader context of defenses and assaults on all 50 miles of Normandy beaches which were defended by 1.8 million German troops, 500,000 beach obstacles, 6.5 million mines, 13,000 fortifications, 3,300 artillery pieces and 1,300 tanks. Against all this, the allies, by the end of the first day, had captured Omaha Beach and 1.8 miles inland. By June 12 it had extended its control to a 60 mile beachhead. By mid-August, it had all but driven the Germans out of France and within a year, forced the German army to the brink of surrender. The cost, however, was high, at 25,000 American lives alone.

The memorial commemorates those who gave their lives and the cemetery is now the resting place for more than 9,400 who had given their lives in Normandy, not to speak of the 1,500 who were missing in action.

Overall, a very informative, not to speak of moving tribute. 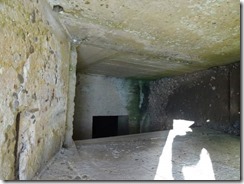 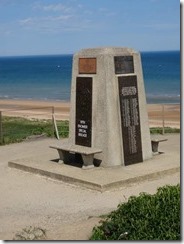 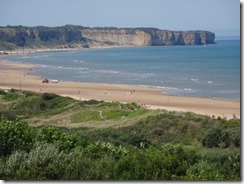 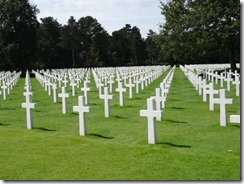 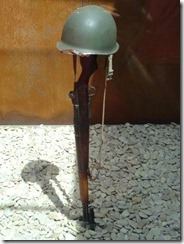 Gold Beach, the site of the British D-Day landing, was our second beach stop. It is especially noteworthy (in addition to the number of British lives lost) as the site of Mulbery Harbor, the temporary harbor that the allies began building within less than a month and a half of D-Day. This harbor, of which a number of artifacts remain on what is now a crowded swimming beach, consisted of miles of hastily, but effectively assembled floating roadways and bridges that were used to transport the thousands of men and tons of equipment needed to defeat the Germans. 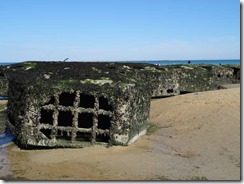 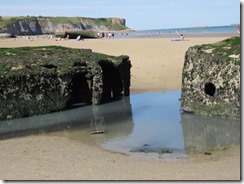 Dinner and Hotel in Bayeau

Trying to minimize calories by skipping lunch, we only had one meal in Bayeau….dinner…where we ate at Restaurant Le Pommier and enjoyed another four-course dinner. This one began with foie gras with bread and figs and a shellfish platter filled with oysters, whelk, periwinkles, prawns and baby shrimp. Main courses consisted of duck in a benedictine sauce and salmon on chicory saffron fondue (both of which were tasty, but overcooked for our tastes), followed by our selection of six of 10 offered Norman cheeses. Both our desserts were based on Norman apples: a phyllo-wrapped “apple pie” with caramel and vanilla ice cream (OK, but not our style as the “crust” was phyllo dough) and a “Coupe Normande”, a cup of apple sorbet with stewed apples, accompanied by a glass of another, much more potent Normand apple specialty­­–Calvados.

Our hotel for the evening in Bayeau was Hotel d’Argouges 21 Rue Saint Patrice. Before we book a hotel, Joyce does extensive research to find great places at reasonable rates. We must have stayed in a different hotel than the other reviewers for this hotel. The outside, downstairs and garden area was beautiful and led us to great expectations and great promise when we walked in. Another plus was that the hotel provided free parking and was in a great location in the old town area. But it went downhill from there. The person at the reception did her job, nothing more. As what seems to be typical of smaller hotels in France, there wasn’t an elevator or offers to help and we had to carry our suitcase up to room 7. The room….well, lets just say that we haven’t stayed in a room like this in a long time. Very dated, no air conditioning (but we did request and receive a fan). The only plugs were under a desk opposite the beds. Maybe it is unkind but this is the first place we have stayed at in a long time where we made sure the bedspreads were not anywhere near our faces. We didb’t see any stains on it, but it just “felt” like we would have if they weren’t a dark red which didn’t show stains. Yes the actual bed linens were soft, but the bathroom light went on automatically when you walked into the room. Each time one of us used the bathroom at night, the light woke us up and woke the other person up. We cannot recommend this place at all in spite of its location and free parking and wifi.