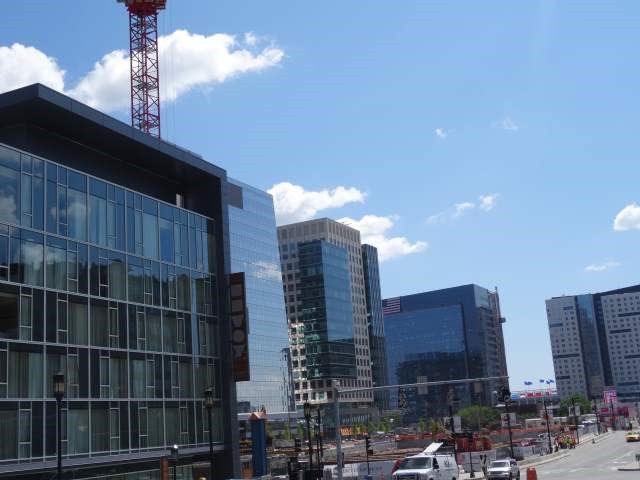 We finished up the trip to Nova Scotia via Boston. Although we have many friends and memories of the time we lived here, this time we had only a day and a half to catch up with the city. Our initial exposure to the city, from driving into and a brief walk through downtown and the eastern end of Back Bay (the area in which we had lived) was that little had changed in the couple years since we had last been in town. Some friends totally shattered that image with an after dinner drive through two nearby neighborhoods.

First, they explained that Boston housing prices, like those in San Francisco, have exploded (surpassing their pre-recession peak) and that houses and condos that do go on the market are snapped up in days, usually for above asking and all cash deals…again, like San Francisco.

New development, meanwhile, is exploding in some long-neglected parts of the city, especially the Seaport and Fenway neighborhoods. We decided that we had to spend more time in each of these areas.

Reinvigorating the Seaport and the Fenway

While we planned to spend most of our one full day in the city walking areas we had frequented, we had to spread our time to get a better look at some of these hot new areas. The big changes, as we discovered in the previous night’s car tour, are in the Fenway and especially the Seaport.

Oh my how the Seaport District has changed. Joyce used to work with a seafood company whose headquarters were on the Fish Pier. At that time, it wasn’t called the Seaport District and Joyce as one of the few woman in the area during the day. And no sane pedestrian would dare to venture into the area at night other than go to the 2 famous restaurants–Jimmy’s and Anthony’s.  Well, the Fish Pier is still there, but that is just about all that remains of when she worked there.

Gone are the handful of old buildings, touristy restaurants and acre upon acre of parking lots and vacant land. It has since exploded over the last three to five years to the point that it is now virtually wall-to-wall high-rise condos, apartments and office buildings, and has become a dining and entertainment hotspot.

While the previously desolate area’s office and residential towers and hotels exemplify some of the physical change occurring in the area (and also bring in many more people), the cultural transformation is evidenced primarily by changes in the old brick industrial buildings that line and surround Congress Street. This traditionally decrepit neighborhood has become a cultural hotspot with millennialist roaming the streets, packing hot restaurants (such as Row 24 (discussed below) and Trillium Brewery, which, at least on the Friday lunchtime we were there, had a line out the door of people waiting to buy cases, half gallon and gallon jugs of the newest brew.

And then there was The Fenway neighborhood, just past the western end of Back Bay, which had been characterized largely by the Fens (and its victory gardens), Fenway Park, low-cost student housing  and scores of stores, restaurants and bars that attracted students and sports fans. It is now being transformed with mid-rise and high-rise condos and apartments (priced for and targeted at professionals rather than students), new upscale clubs and soon, a high-end Wegman’s supermarket.

But while the rejuvenation of this area was interesting, our attention was diverted by the pre-game activity around Fenway Park (the unfortunately, cellar-dwelling Red Sox vs Detroit) and by the Museum of Fine Arts.

We also made our own cultural stop in the Fenway with a visit to the Museum of Fine Arts. We divided our time between some of our favorite galleries (especially 19th and 20th century American and French) and a special exhibition of prints by Hokusai, the Japanese artist whose many print series (especially his “36 Views of Mount Fuji” and those of the “Great Wave”) were instrumental in bringing low-cost art to the Japanese masses and to souring a revolution in Western art, as in the way in which influential and popular western artists (including Impressionists including Monet and Renoir) who began incorporating Japanese themes and pallets into their own work.

A Spin Through “Old Boston”

Of course, we also took time to walk though a couple of our old haunts including Back Bay and Beacon Hill (where little has changed) and downtown, where we discovered more new development, public art and recreation spaces, plus a museum we had never before seen, Mass General Hospital’s Museum of Medical History and Innovation (which was unfortunately closed for the day).

While much of downtown is similar to our last visit, a few new high rises are now under construction and the Greenway (the strip of park above what was called the Big Dig–or the huge construction project that moved the ugly Central Artery that divided the city into underground roads) has been graced by an interesting, multicolor plastic net-like construction that hangs from surrounding buildings. Then, for a return to the old Boston, we walked enviously through the Haymarket Farmers’ Market, whose prices were far below those at San Francisco farmers’ markets and Quincy market, where free ping pong and other activities have been set up.

Of course, food was on the agenda as we were anxious to try some of the many new restaurants that had opened (and recommended by our friends who still lived there) since our last trip to the city (about 2 years ago). And since our friends joined us at each dinner, we got to try multiple dishes. The dinner selections were:

Our one Boston lunch was at one of Seaport’s hottest new seafood restaurants:

And that’s the end of a great 3 week trip. The next morning we said goodbye and made our way to the airport to go back to San Francisco.