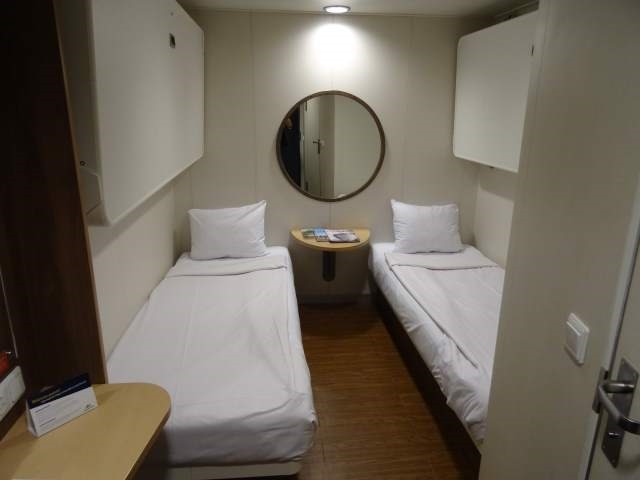 One way to get from Nova Scotia to New England is to travel from Yarmouth, Nova Scotia to Portland, Maine via the NovaStar ferry, a lo-o-o-ng (10-hour) sea journey. While many people use the ferry to transport their cars, as well as themselves, we left one rental car in Yarmouth and picked up another in Portland.

Although the 2014 reinstatement of the ferry service provided the final push we needed to take our long-planned, but continually delayed our Nova Scotia trip, we didn’t know what to expect.

One thing we did expect was a crowded ship that would make finding seats in the public areas hard to secure and picking up luggage at the end of the trip a long, time-consuming process. So even though the cruise to Portland is during the day (9:30 AM Atlantic Time to 6:30 PM Eastern Time), we decided to get a stateroom (an exterior facing one with a porthole, rather than an interior one) to have our own private space and a place to store our own luggage.

Our first surprise was that the ship was probably less than one-quarter filled. The lounges had plenty of room, including in the highly desired Piano Bar, with its wall-to-wall bow windows, comfortable seats, bar, and coffee shop. The reserved seating area was totally empty and there were plenty of inside and outside areas to walk, explore and to take in the views (at least for those times we weren’t enveloped in fog).

For those who wished, there were also movies, games, children’s play areas, televisions (showing the last round of the British Open the day we sailed), bars, duty-free shopping, a casino, and a spa. And, for those without a private room, there were also free public showers, towels that could be rented, and individual portions of soap and shampoo that could be purchased.

The ferry had three restaurants, ranging from a pub to a buffet and a sit-down dining room. Since we had a nice, filling breakfast at our B&B, we didn’t need breakfast. We were skeptical of the food service and had planned to bring our own lunch (what else, but a lobster roll?). But from what we read online, the dining room (as well as the pub and buffet) would be open for lunch. And people who had taken the ferry from Portland told us that the dining room food (especially the fresh, local seafood) was actually pretty good. So we decided to take our chances. Unfortunately, as we discovered when we boarded, the dining room was not open on the day cruise–only at night. The buffet was the best we were going to do.

We were, however, again pleasantly (at least moderately, pleasantly) surprised. Although it was still a buffet, it offered many different options, including:

Overall, the cruise was uneventful and peaceful. We had plenty of time to read, catch on on our blog and enjoy the views when we weren’t in a fog bank and were close enough to the coast. The ship and its facilities were aesthetically pleasing and comfortable, the staff friendly and helpful, and the activities and entertainment plentiful. Lunch was more than passable, if not enticing. As it turned out, getting our own room proved to be superfluous.

We did make one incredible discovery on the voyage. Since we had so much time, we did something we almost never do: wander into the Duty-Free shop. Although we were not fans of the Nova Scotia wines we tried, we have a big weakness for Niagara Peninsula ice wines. We found one, a 2008 Equifera Vidal Ice Wine for a very reasonable $20. When we looked it up, we found excellent reviews and the honey-like consistency and peach and apricot tastes that we normally like–and a list price of $50. We tried one, loved it, and bought as much as we could legally bring into the country. A great find!

Overall, it was a pleasant experience, although we would have preferred if our schedule had permitted an overnight cruise, rather than taking up a full day.