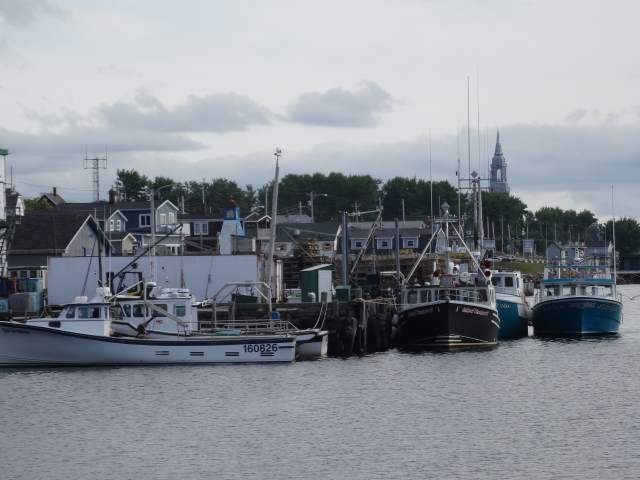 The focus of our Cape Bretton trip was the Cabot Trail, the National Park and its trails. Towns, however, do make convenient evening and restaurant stops and sometimes have other attractions that can’t be found in nature. We stopped at three of the island’s primary towns.

Cheticamp, a town at the Western entry to the Cape Breton National Park, was our base for exploring the western side of the park. The small tourist town offers little in the way of sights, cultural amenities or dining options. It also offers one activity that we desperately wanted to take advantage of, but were unable to do so. Although a couple vendors offer whale cruises, one offered an intriguing twist: an opportunity to snorkel with whales. You go out on a Zodiac, bundled in a dry suit. When the guide spots whales, he gets as close as legally permitted and the snorkelers slip into the water, under strict conditions: no scuba gear, no freediving, no aggressive swimming, and no approaching the whales. The snorkelers float quietly on the surface. If the whale, by chance or curiosity, comes toward you, you get a close up view. If not, you don’t (although, time permitting, you can get a chance to find other whales). And not just any whales. The guide focuses on whales that are most responsive to, and are most likely to approach humans–Fin whales (up to 75 feet in length) and large pods of smaller Pilot whales (typically 12-24 feet). Too bad this wouldn’t work with our schedule. It would have beat our experience snorkeling with whales in Glacier Bay, Alaska.

Cheticamp, as primary entrance to Cape Bretton Highlands National Park, also has a handful of full service, generally family-oriented restaurants that offer a selection of comfort foods (especially pizza), standard popular appetizers, meats, pasta, local favorites (such as poutine). We, however, were there for the local, just off-the-boat seafood. Although we sampled local oysters, mussels, fish (haddock and sole) and crab, we were there for the lobster. Our following post on Cape Bretton Island Restaurants and Entertainment discusses all of the restaurants at which we ate on the island.

One thing Cheticamp does have in abundance are evening entertainment options. Although there is a nightly performance of a historical musical comedy, we decided to take our music straight. Over the course of two evenings, we heard four musical groups. These are also discussed in following Cape Bretton Island Restaurants and Entertainment post

More a cluster of tiny villages than an actual town, the highlight, as with Cheticamp, is a large, pretty church. Beyond that, there is Keltic Inn (where we probably mistakenly decided not to stay. Restaurant options in Ingonish, at the eastern entry to the park, are quite limited. Lunch required a bit of a search to find our lobster roll (although we did explore alternatives with an open mind, none of the options stacked up). Fine dining options are even more limited: to two. These are the Keltic Inn and inn at which we did stay, the Seascape Coastal Retreat. (See our following post on Cape Bretton Island Restaurants and Entertainment.

From Ingonish, we drove down the island to Baddeck for a visit with Alexander Graham Bell.

Alexander Graham Bell National Historic Site was a former home and part-time laboratory of the inventor and his family. Exhibits tell the story of his life and how his initial focus on speech therapy (his father and grandfathers were professors of speech and elocution and his father developed a phonetic alphabet to help the deaf learn to speak). His first job and passion meanwhile, were in teaching speech to the deaf and he performed experiments in electricity during his spare time. He combined his vocation and avocation into the invention of the telephone. This allowed him to devote the rest of his life to following and conducting experiments in whatever areas he found of interest–and in his lifetime commitment to helping the deaf.

These subsequent interests and experiments included extensive work in areas including:

He also did pioneering work in the use of tetrahedral structures to create high-strength, low-weight structures including a kite strong enough to carry a person and tall towers. He did additional work in areas as diverse as transmitting sound on sunlight, transmitting sound through water, wind velocity measurement, water desalinization, artificial cooling (air conditioning), genetics and in medicine (such as in creating an artificial respirator and a device for detecting metal in the human body). He was also one of the first (in 1914) to identify (and naming) the greenhouse effect and the role of fossil fuels in global warming, and advocated heavily for and conducted experiments in using solar power as an alternative to fossil fuels. But, unlike Edison, who was a professional inventor, Bell was an independent amateur inventor who lost interest in products that began to reach commercialization.