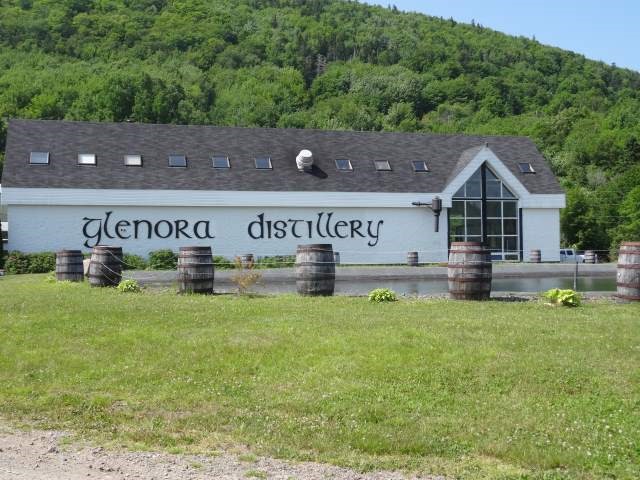 We began our journey by driving clockwise (the route recommended for the most dramatic views), up the west coast to Cheticamp, at the western base of the National Park. We stopped at a couple of the island’s more interesting venues (Canada’s only single malt distillery certainly qualifies as interesting to Tom—as does the Alexander Graham Bell Museum), stayed in two (and visited three) of its primary towns and especially, explored and hiked parts of the Cabot Trail. The blog is about our first stop–at the distillery.

It was a long trip from the Annapolis Valley, so we needed a break. And what better break than a single malt distillery (the only one in Canada), where we took a tour and then sampled three very different whiskys (Canada spells it without an “e”). We began at the stream (a perfectly neutral ph of 7) from which the whisky is made and then into the distillery. It is this barrel aging, along with the specific water, barley and yeast that is used, the source of heat in the kiln, the material through which the liquid is filtered and atmosphere in which the whisky is aged, that imparts taste. Glenora, for example, has traditionally not burned peat in its kilns (which contributes so much to the taste of Islay scotch whiskeys), although it is now beginning to produce a few barrels with peat. And while aging the whisky near the ocean does impart some of the salt of Islay, the proximity of an apple orchard also imparts something of an apple taste. What are the results? We sampled three very different Glenora single malts. The 10,14, and 19- year. The 10 and 14, both of which are 43 percent alcohol, were light and, to Tom’s taste, lacked complexity and finesse. The 19, by contrast, is rich, has a deeper color and, despite its 53.7 alcohol level, is much smoother. It should be. After all, while the 10- and 14-year cost $80 and $120, respectively, for a 750 ml bottle, the 19-year costs $300. Although we are not likely to buy any soon (especially since U.S. distribution is so limited), the tour and tasting were interesting experiences.