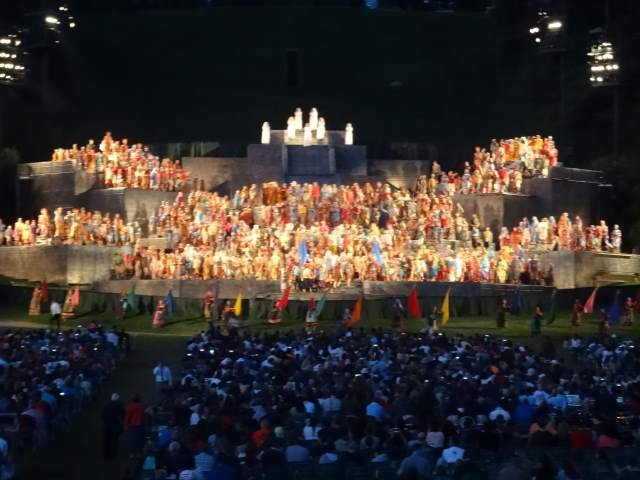 We recently made a short, but event-packed trip to Syracuse New York, mostly to see family, but also to get caught up on what was happening there.

We timed our visit specifically to go to this annual happening, a pageant that has been held on Cumorah Hill for the last 100 years. The location, a small slope about an hour west of Syracuse, was the site to which an angel supposedly guided Joseph Smith to the centuries-old metal plates that held the text of the Book of Mormon. The show consists of a cast of 650 (yes, 650) performing a 1.5 hour recreation of the founding of the Mormon religion. The spectacle, held on a massive 10-level stage, is accompanied by Hollywood-style special effects and surround sound. It is divided into ten sections, beginning in 600 BC Jerusalem, and culminating in 1823 in Palmyra, New York where the Book of Mormon was found. It explains the journeys and travails of generations of prophets who, guided by God and Jesus Christ, overcame disbelief and rebellion to found the new religion.

Everything was informational and professional (similar to what we found a long time ago in Salt Lake City when we visited the primary Mormon complex)–from the traffic control and parking system, to the personal greetings by cast members, an accommodation of information booths by anti-Mormon groups, the grand production itself. 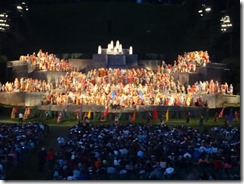 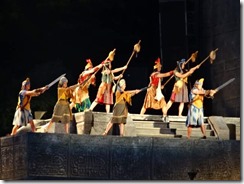 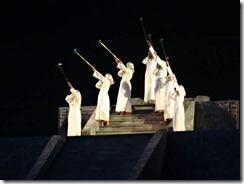 Although we missed the summer’s big music event (the Syracuse Jazz Festival with Aretha Franklin, Wynton Marsalis and Buckwheat Zydeco) by a week, we did happen to be in town for the two-day Syracuse Blues Festival. We joined the Clinton Square crowd for two of the Festival’s 15 groups. Our choices: Swamp Drivers (rock and blues originals on quirky home-made string and percussion instruments including a one-string garden hoe and four-string boat oar) and John Primer (Grammy-nominated Chicago blues guitarist for Muddy Waters, Magic Slim and others). Additional, primary local groups played between the Main Stage groups, providing music through the day. The crowds, meanwhile, grew through the day, as did their level of appreciation–especially for Primer. 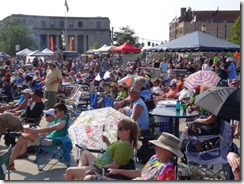 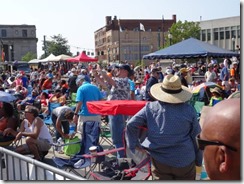 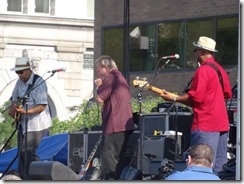 As discussed in our August 29 2014 post, my cousin, Tom Greenwood, created and is the winemaker at Greenwood Winery in Syracuse. The winery, wine tasting, BBQ, bistro and event complex is now open; and judging from our experience, in full swing. Friday evenings (and soon, Saturdays too) are the big events, with entertainment by a local band.

The evening of our visit, Tom Greenwood was joined by more than 500 of his friends/customers, all enjoying the warm weather, classic rock music, and the smoke and smell of a barbecue grill that was pumping out ribs, pulled pork, chicken and burgers. And don’t forget the selection of 20 different Greenwood wines that he makes and a similar number of craft New York State beers.

For those looking for snacks or a sit-down meal, the snack bar and bistro (with seating both inside and outside on a patio overlooking the band) await. The menu consists of a range of appetizers, charcuterie, local greens, soups, sandwiches, flatbreads, entrees and desserts. (See below for our thoughts about our meal and a sampling of the current vintage of Tom’s wines.)

Don’t ask us why, but the town of East Syracuse traditionally holds its annual fireworks demonstration the weekend after the July Fourth Weekend. Whatever the reason, we all but missed this year’s San Francisco aerial display due to the fog. So, we decided to partake of this unexpected second chance. It was well worth while. After a couple hours of 60’s songs had warmed up the audience, the fireworks began on schedule and continued for a half hour. A very nice combination of colors and effects that, although our pictures don’t do justice to them, far surpassed our expectations. Sure, Boston, Washington DC or New York may have better fireworks, but for such a small town, this was terrific 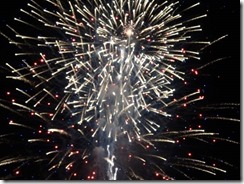 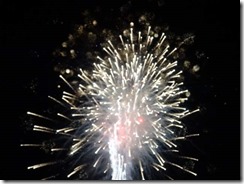 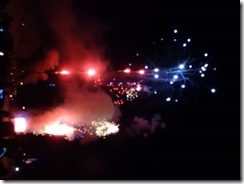 We had time for a brief stop at the Everson Museum in downtown Syracuse between the Blues Fest sets that we wanted to see. Although the museum does have an extensive ceramics collection (part of which was broken out separately in a fun display of quirky pieces), the rest of its permanent collection is quite small. The museum, however, did had a couple special exhibits. One, by the husband/wife team of Hilderbrand + Magsamun, explores the humor in daily life and consumerism in a series of videos and sculptures. One particularly interesting one is a satellite made of an amalgam of household goods including an umbrella, a rake, fly swatter and egg beater. Particularly interesting is a large display of colorful, interestingly shaped and textured acrylic paintings by a local artist, Susan Roth. 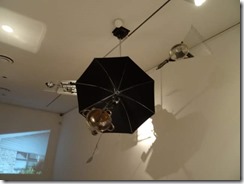 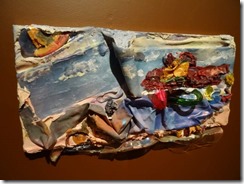 And of course, we had to check out food during our trip.