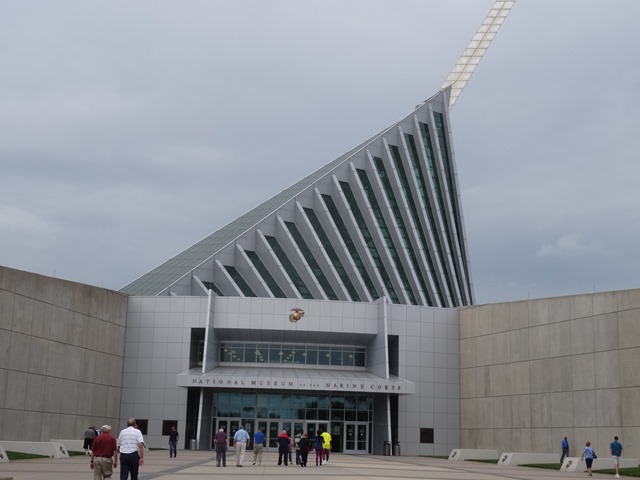 We have passed Quantico on a number of drives, but never got around to stopping, this trip we did. Quantico is the home to one of the nation’s largest U.S. Marine facilities and the headquarters of its Combat Development Command. It is also home of the:

National Museum of the Marine Corps

The huge (even before its planned $50 million expansion) strikingly modern building that is fronted by a replica of the famous Arlington National Cemetery sculpture of marines raising the flag atop Iwo Jima’s Mount Suribachi. 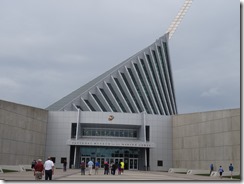 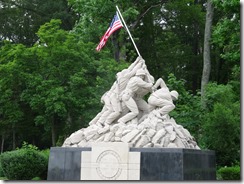 Inside you pass through several galleries:

Leatherneck Gallery in the atrium, explains and displays aircraft to emphasize the critical role of different types of aerial (helicopters, vertical take-off/landing, close-air support planes and dive bombers) and amphibious power in accomplishing the Marines’ mission; 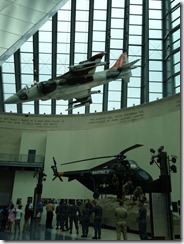 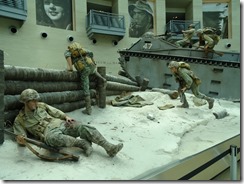 Making Marines exhibit focuses on what the Marines are looking for it its people, the training process, what it entails (including the special training of its officers) and the focus on teamwork and readiness for immediate deployment;

Legacy Walk is a timeline highlighting the times the Marines have been called into action and the evolution of the Corps.

The bulk of the museum is divided into galleries that are dedicated to the many conflicts in which the Marines were involved. It begins with an overview of the pre-Revolutionary creation of the Marines under the British Marines, and the limited role they played in the Revolutionary War. Although the Marines were briefly disbanded after the war, they were subsequently recreated as part of the Navy Department. This first gallery than profiles the Corps’ role in other early engagements and wars including the Barbary Wars (as in the "Shores of Tripoli"), War of 1812, Indian Wars, Mexican War (through the "Halls of Montezuma"), Several Pacific conflicts (including China’s Boxer Rebellion and Commodore Perry’s opening of Japan), the Civil War and the era of American Expansionism (1886-1916) as part of Theodore Roosevelt’s "Big Stick".

Most of the other galleries were dedicated to individual large wars and some of primary battles in which Marines played particularly important roles. For example:

World War I gallery focused especially on Bellaw Woods, a frontal assault on hidden German machine guns in which the Marines suffered more casualties in a single day than in its more than 100 year history. It looked at the role in breaching the Hindenburg Line and how the war issued in the modern Marines, as with its formal training camps and the admission of women. 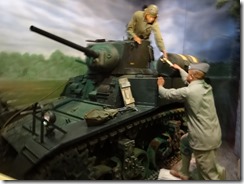 World War II gallery focused especially on the war in the Pacific, with particular focus on amphibious warfare and the especially costly battles including Guadalcanal, Tarawa, the Marshall Islands and most importantly, the Island fortress of Iwo Jima in which the Marines lost more men than in all of WWI. It also dealt a with the POW death marches and brutality and the atoll this took on morale, as well as on lives. 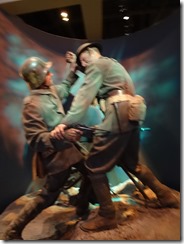 Korean War gallery began with a discussion of the Cold War atmosphere and fear of communism that shaped the era, the difficulty of the conditions (especially the winters), the interaction of air, land and sea combat and battles such as Inchon and those around the DMZ. 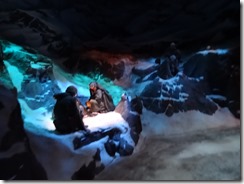 Vietnam War gallery brought back all the horrors of guerrilla warfare, the tactics employed, the key battles (such as Hue and Khe San, and the country’s ignominious "Peace with Honor" withdrawal. 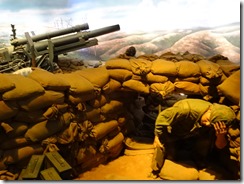 The final gallery provided very high level overviews of the Afghanistan and Iraqi wars, including contemporary updates, including the event battle to retake Fallujah. (These wars will certainly be covered in as much detail as the previous wars when the new extension is completed–an expansion that will also certainly leave space for future wars and engagements.

While the galleries and comprehensive videos and explanatory placards focused primarily on the wars, their political context and the incalculable human costs they imposed, many of the exhibits were on the evolution and increased sophistication (not to speak of deadliness) of weapons. This evolution began with how muskets evolved into spiral-bore rifles, machine guns, armored vehicles, tanks, flame throwers, planes, parachutes, helicopters and the emergence of chemical and nuclear weapons (neither of which are used by marines, but have to be defended against). Scattered throughout the galleries were examinations of the evolution Along with this were discussions of evolution of other technologies (such as communications and transportation), tactics (such as logistics networks), personnel (the role of women and especially the difficulties faced by blacks in overcoming entrenched racism). 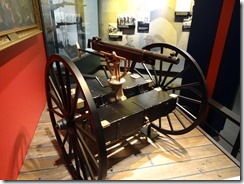 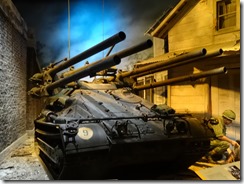 After a very full morning in Quantico, we needed sustenance. Since Joyce had been trying to find soft shell crab from the moment we arrived in the southeast (during soft shell crab season), I had been on a mission to find them. I finally succeeded by finding Dumfries’ Tim’s River Shore. True to the restaurant’s name, we pulled up one of plastic tables lining the riverfront where we struggled to choose from the compelling menu, the incredibly rich, cream-laden crab soup was delicious. Less so the soft shell crab sandwiches. The crabs were tiny, heavily breaded and slightly overcooked. Still, the atmosphere is attractive and less than perfect soft shell crab was better than no soft shell crab at all.