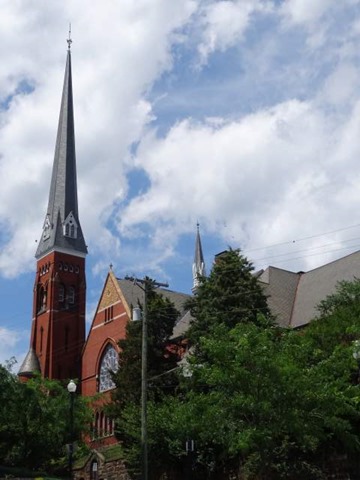 We had a bit of a drive from Appomattox to Waynesboro, where we had planned to spend the night before spending the next day exploring and hiking Virginia’s Shenandoah National Park. Although we could have, in theory, driven this distance in about an hour and a half, why should we do than when we could spend an entire afternoon? So, we stopped for lunch and a brief walking tour of Lynchburg and, after discovering nothing to do or eat in Waynesboro (at least nothing that interested us), we discovered a nearby city in which we which we could have spent an afternoon and then, the night. But first things first: Lynchburg.

From Appomattox, we were off to Lynchburg. This former transportation hub and key supply depot for the Confederacy has retained much of its historical legacy in the form of its downtown and a number of historical residential districts.

So. After a quick lunch, we stopped at the Visitor’s Center for a brief intro to the city and a map of its historic districts. We were then off for a self-guided tour of Daniel’s Hill, Diamond Hill and Court House Hill. We ended up at the 139-step Monument Terrace, which honors those of the city’s citizens who died in wars, and which overlooks the high-spouting Langley Fountain. 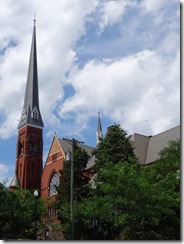 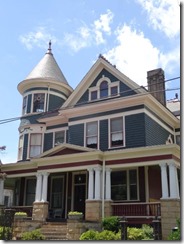 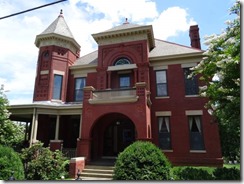 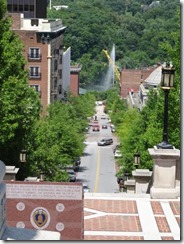 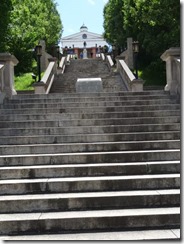 Then back onto the Blue Ridge Parkway to Waynesboro and The entrance to Shenandoah National Park and Skyline Drive.

We reserved a room at one of the dozens of strip hotels in Waynesboro, just off the southern entrance to Shenandoah National Park. When we asked for the best restaurants in the area, we were sent to Staunton, a city of which we had never heard, that was about 10 miles to the west. We had never heard of the 25,000-person city. We certainly never imagined that it would be such a happening place, and a place where we would have much preferred to spend some time.

Although the restaurant we had initially chosen (Emilio’s) was closed that day, our second choice, Mill Street Grill, was open. This local hot spot, located in what had been an 1890-era flour mill, provided the first of many of the evening’s surprises.

First, we never would have expected that the packed local’s restaurant, which specializes in barbeque and sandwiches would offer pecan-crusted grouper (in a lemon beurre blanc sauce) and grilled quail (with a port wine sun-dried tomato sauce with sautéed peppers, onions, mushrooms and basil) would be available as specials. True, the grouper was a tad undercooked and the sauce overwhelmed the quail. (Both issues, however, were easily addressed by briefly popping the fish back into the oven and by eating the very good quail without the sauce.) Nor would we have expected this casual, local’s restaurant’s wine list to have a nice and reasonably priced 2011 Vino Nobile de Montapulciano. But it did!

Our real surprise was the city itself. Although the small downtown did, as we would have expected, have a fair number of vacant storefronts, the distinguished old buildings were freshly painted and the streets totally clean. Walking further, we found a number of distinguished (and again, very well maintained) homes, a lovely B&B that we would have stayed at in a heartbeat (if we knew about it before) and to our greater surprise, the Woodrow Wilson Library and Museum! (We would have absolutely visited this museum had we only had time). 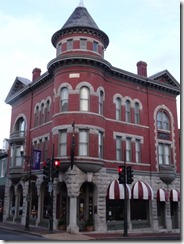 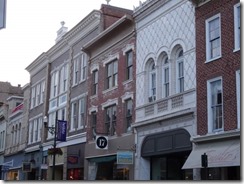 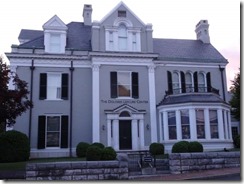 Then, walking back to our car, we ran across another surprise: By & By, a cafe and beer garden with extensive wine and beer lists that just happens to show vintage films on an outdoor screen. And yes, they even served popcorn with the movie. We couldn’t resist a couple of drinks and watching the 1949 Otto Preminger Film Noir movie, Whirlpool. A wonderful town that we will absolutely remember the next time we come to Shenandoah National Park. 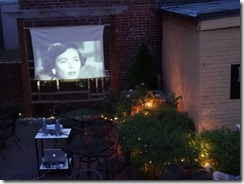