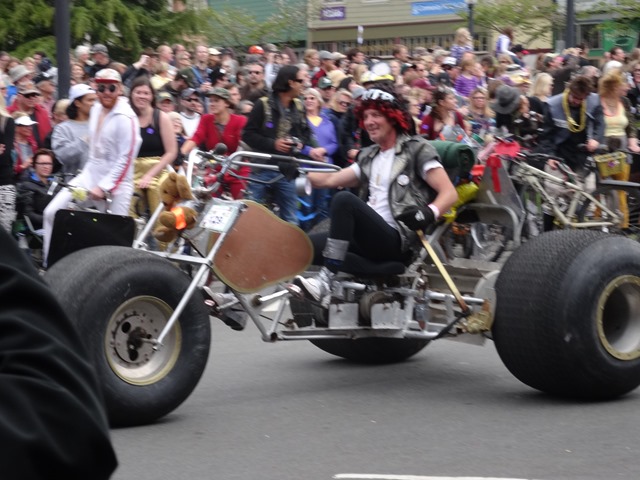 The Humboldt County Kinetic Grand Championship race is a local institution. The concept of a Kinetic Sculpture Race was originated and first held in Ferndale in 1969. The race, referred to as the “triathlon of the arts” is a three-day competition of human-powered art over a 42-mile course along roads, through water and over sand dunes. While the concept of kinetic races has since spread to six additional cities, the Humboldt Country competition is the largest, most demanding and most elaborate of them and is generally viewed as the annual unofficial annual championship.

The Legend and the Lore

We first attended the Humboldt County Kinetic Sculpture Grand Championship Race ten years ago. We had such a good time that we knew we would return. Although it took us longer than we anticipated to return to the annual Memorial Day celebration, we finally got back.

The race begins with a showing and final tuning of the always innovative, and sometimes extravagant devices around Arcata’s Plaza. Race, however, is something of a misnomer for the event. Although there are certainly kudos and trophies for the winners, there are all types of awards. The three primary awards (each of which has a forest, second and third place) are for speed, engineering and pageantry. There are also dozens of others, including two for “golden flipper” (the best flip in the sand, and in the water), “poor pitiful me” (interesting concept, but poor results), “mediocre” (for one who finishes in the middle of each major category! And others for participants who comes from the greatest distances.

Just what do these winners get? Generally a trophy. More important is the primary reward–the universally, and reverentially-cited founding motivation of Kinetic Championship lore–“the glory”!

The sculptures come in all shapes, sizes and levels of sophistication. Some are basic one or two-person utilitarian devices that are intended as the minimum required to accomplish the required tasks in the shortest time. One ingenuous one-person vehicle with huge balloon tires was powered by pneumatic-assisted platform on winch the pilot continually shifted his weight with slight jumps. Then there are the many somewhat larger, relatively basic, but more interesting and in some cases, such as Pink Elephant and Fungi, more lavishly decorated sculptures. Most impressive are the large, elaborate multi-person devices (one accommodated up to 12 peddlers plus more than a dozen support staff) that are designed largely for show, such as a giant whale skeleton, Rodenberry, which was based on the starship Enterprise, another in the form of a huge whale skeleton, and our favorite, a huge shark whose mouth opens and closes, who breaths great plumes of fire and exudes smoke. Although most of the smaller sculptures are one-person operations, most of the larger ones have multi-person crews and accompanying entourages–groups of people who have contributed to the design, building and maintenance of the devices and provide moral and physical support as required. In some cases the crews and entourages are elaborately attired, wearing uniforms and hats. Those of the largest, most complex sculpture, a giant mechanical shark named “Bite Me”, wore formal looking suits with big top hats whose lids popped open to show intimidating rows of sharp white teeth. But any such large gathering requires management. This is especially true when the competition is one great excuse for a giant party. This requires officials (who proudly display their caches of credentials, badges and ribbons, and police (as informal and laid back as they may be. And, as with any competition and large party (especially one that entails copious quantities of alcohol and drugs) it also requires medics, Kinetic Medics. For most, however, the primary payoff comes from the camaraderie and partying associated with designing and building their sculptures, participating in the event and joining in the huge three-day party–a party powered as much my alcohol and marijuana as by the muscles required to pedal the devices up and down roads, along beaches, up and down sand dunes and through water.

That’s what the Kinetic Grand Championship is all about. As for the race itself, check our June 6 post.