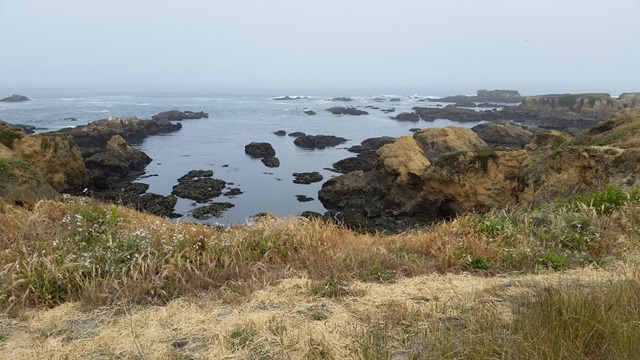 On our way to the annual Humboldt County Kinetic Sculpture Championships (see subsequent posts) we made a brief two-day detour through the Anderson Valley to Mendocino. While Anderson Valley Winery stops and Mendocino restaurants are discussed in our previous post, this post focuses on the walks we took through the village and especially, in three of the area’s State Parks to which we had not previously been. (Some of those to which we had been are discussed in the linked post).

We spent one day exploring two of the area parks to which we had not previously been: Glass Beach and MacKerricher. Then in the afternoon, we returned to the beautiful Mendocino Botanical Gardens. Both evenings included time to take two of our absolute favorite area walks: a stroll through the village of Mendocino and a walk of the beautiful Mendocino Headlands State Park.

Glass Beach is one fascinating section of a long cliff-side walk along the shore of Fort Bragg. The cliffs, formed by the subduction of the Pacific plate under the North American plate on the San Andreas fault, and eroded by the forces of nature, form a dramatic backdrop to a magical beach that is covered with beautiful, ocean-polished shards of multi-colored glass and stones.

The entry to MacKerricher State Park meanwhile, is marked with whale skeletons (an adult Grey and a baby Humpback) and a visitor center that provides background on the park’s history (as a timber mill and loading station), its geology (cliffs, tidal pools, and sand dunes) and its biology (especially sea mammals, such as whales, harbor seals, and sea lions). The coastline varies greatly from the southern to the northern ends of the park. The south is dominated by sandstone cliffs and shoreline tidal pools: the north is by vegetation-covered sand dunes and long, flat sandy beaches.

Although interpretive panels helped us learn about more creatures that sometimes occupy tide pools (mussels, anemone, sea stars, sea urchins, crabs, and so forth) than we actually saw, we did see a few of these plus a somewhat rubbery, translucent blue organism that was totally unlike anything we had seen or read about. When we showed a picture to a park ranger, he told us about velella velellas, small, blue, jellyfish-like creatures (with the blue platform, sail, tentacles, and digestive system) that is carried to shore by currents. Then, later that weekend, along a Northern California beach, we saw millions more. Some that were still in the water, looked like those in the park. Those washed up on the beach were in various stages of drying, ranging from a bluish slime to dry white flakes that covered the beach. 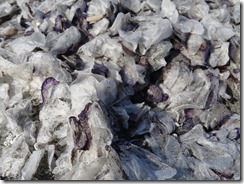 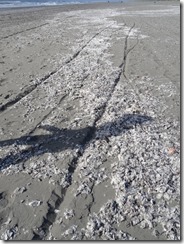 The Mendocino Coast Botanical Gardens consists of multiple sections, each with its own unique character and beauty. At a high level, the gardens are divided between:

All were beautiful in their own ways: the forests, for example, for their tranquility, the prairies for their sweeping vistas, the roses and rhodies for their explosions of color, and the cactus garden for its layout.

We walked the dramatic Mendocino Headlands State Park every time we are in town. Although we normally follow our traditional route past a small beach, cliffs pocked with coves and tunnels that have been worn through the rock and above tidal pools, this time combined this walk with another across another section of the cliffs pace and overlooking a large beach at the mouth of the Big River.

Then through the Village of Mendocino, with its Old West-style Main Street, wooden sidewalks, false-top buildings and all, the beautifully-maintained and appointed lobby of the Mendocino Hotel, the beautifully restored Victorian Inns, the carved, redwood Father Time statue above the Masonic Lodge. And if you really, really, really need gas, there is always what has been called the most expensive gas station in the United States (gas was about $5.50per gallon of regular, compared with $3.31 in nearby Fort Brag).

Then, of course, there are the town’s many water towers–wooden water towers that range from standalone, to those having homes built into and around them and even one exemplary multi-use structure with a two-story art gallery, a residential unit and topped by not one, but two water tanks.

We topped off the evening with a final drink at the MacCallum House lounge.