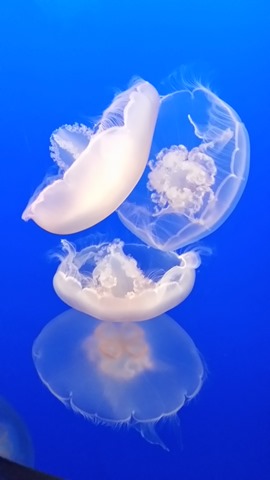 One of our favorite aquariums is the Monterey Aquarium in Monterey California. What a fascinating way to spend a day, staring at cute, playful sea otters, being mesmerized by iridescent jellyfish, and trying to identify many of the pelagic giants in the museum’s huge, room-sized tank.

The entire aquarium is arranged generally by aquatic environment, such as cold water and coral reefs, kelp forests and the open sea. Some exhibits, such as those on jellyfish, cephalopods, penguins, and ever-popular sea otters, focus on specific genus and species. Feeding times at each are accompanied by interesting presentations that are able to engage everybody, from young children, through old, retired adults (like us). Meanwhile, a presentation on the “deep sea” showed images and discussed other-worldly creatures that exist at the bone-crushing depths of the deepest oceans, but also explained the pioneering work of the Monterey Bay Aquarium Research Institute (MBARI) in developing the remotely operated vessels (ROVs) and funding the expeditions to discover and study these species.

We love watching the dozens of different species of jellyfish, including the bottom-dwelling Medusas that lay upside-down on the seafloor, with their tentacles filtering water that flows above them, to the colored (blue, brown, and white) Blubber jelly and the various fluorescent and bioluminescent species.

The coral reefs are beautiful with their incredible multicolored coral and tropical fish.

The kelp forest display is delightful. It has dozens of different species of fish, including schooling anchovies which fan out into beautiful patterns as large bass and sharks swim through the middle of these schools.

The amazing cephalopods range from the ancient, fascinating symmetrically-shelled nautilus, to the delicious squid (calamari), the highly intelligent, shape-transforming octopus, and the cuttlefish which can instantly change colors to adapt to its surroundings.

And then, of course, are the endearing sea otters. They are so adorable that you would almost want to adopt one until you realize that it is a member of the weasel family.

Feeding times are particularly popular among many exhibits; not only for watching the animals interact with humans but also for the narrations and the chances to ask questions. We caught feeding times for seabirds, sea otters, and for the kelp tanks.

But while all the fishes and animals appeared to get along quite well, a few were engaged in territorial squabbles. Docents, meanwhile, claimed that they had to regularly add anchovies and other small fishes into the kelp tank, since some of the larger fish enjoyed snacks between regularly scheduled meals. Eels, although they always look threatening, were sufficiently isolated as to have few opportunities to launch sneak attacks. The beautiful lionfish, with their sharp poisonous spines, present danger just by lying on the ocean floor.

And what would an aquarium be without an exhibit on endangered species, such as tuna (which are being severely overfished), sea turtles (which are caught and killed in fishing nets), and sharks (which are persecuted, caught as byproducts, and whose fins are still prized as delicacies).