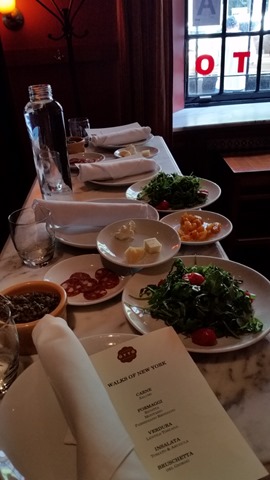 Walking is, for us, the only way to get around New York City. It is a convenient way of combining exercise, sightseeing, and capturing the atmosphere of neighborhoods, all while avoiding the delays of traffic and the terror of a ride with a renegade cabbie. While we know the city well, we still like to take organized walking tours to learn even more. Here are some of the tours we have enjoyed

This was a very good tour that was made even better by our guide (Nikki) whose knowledge and passion for Italian food and fresh quality ingredients couldn’t help but wash over the group. The tour began with a brief overview of the village as a culinary Mecca from its role as an Indian and Dutch farming and fishing village through the early 1800s, then as an Italian immigrant neighborhood, until the early to mid-1900s when it became a bohemian community with little regard for fine food. The feast began with arancini (from Faicco’s) and took us through stops in the reinvigorated culinary neighborhood. These included:

Between stops, Nikki regaled us with stories about food and the neighborhood and pointed out a number of other prominent Bleeker Street food palaces, such as:

We also stopped in Rafetto’s, a century-old, family pasta and sausage shop that makes and sells every shape and flavor pasta you can imagine. We were so intrigued by the chestnut flour that Joyce has committed to making some chestnut pasta soon.

It was a very interesting, very tasty, and very filling tour.

Few urban neighborhoods have undergone such a rapid transformation as the Meatpacking District. Spurred by the opening of the popular Gansevoort Hotel, the extension of the High Line to the District, the culinary draw of Chelsea Market, and the Whitney Museum, this neighborhood is on a tear. The number of meat distributors is dramatically declining, being replaced by luxury condos and apartment towers, upscale clothing and accessory boutiques, and dozens of bars and restaurants, ranging from atmospheric and fun dive bars to upscale restaurants.

We, however, spent most of our browsing time in two neighborhood markets:

The wildly popular Chelsea Market draws gourmands from around the city with its specialty Italian, seafood, spice, pasta, and oil/vinegar markets and its popular bakeries (Amy’s and Sarabeth’s), pop-up designer clothing stalls, and its many restaurants.

There’s also a new food market in town, the Gansevoort Market, which is half a block from the Whitney. Much smaller and more intimate than the huge, teaming Chelsea Market, Gansevoort contains dozens of food stalls with everything from burgers to crepes to Thai street food. Our post-museum pick-me-up came from Ed’s Lobster Bar, where we shared a very good, semi-naked lobster roll. While many of the stalls have their own seating, the market also contains communal seating in a comfortable, vine-covered eating area.

This Big Onion two-hour walking tour goes through Greenwich Village, which had one of the greatest concentrations of speakeasies in the city. Temperance movements began forcing a crackdown on alcohol sales—especially to working-class men and blacks—in the 1890s, with the passage of state Blue Laws (which restricted drinking on the one day that laborers had off and were most likely to frequent bars). Then, in 1919, aided by crusaders such as Margaret Sanger and Carrie Nation, the Federal Government amended the constitution to dramatically limit the sale of alcohol across the country—an amendment that later gained enforcement teeth with the passage of the Volstead Act.

The tour, which took us past the locations of a number of the most notorious of the neighborhood’s speakeasies (most of which now bear no resemblance to those days), explained the impact of Prohibition on the neighborhood, how it created great new demand for musicians to play in the club and how it helped to spur the creation of Black and Tan clubs (which catered to multiple races) and gay and lesbian bars. It examined some of the very different types of speakeasies, from the raunchiest hellholes and prostitution joints to upscale establishments that catered to the rich and famous, and one that even acted almost as a civic organization for its neighbors. It explained the methods and successes of Izzy Einstein and Moe Smith (two of the most effective federal agents charged with enforcing the law), the ingenious ways in which people found to exploit loopholes (such as alcohol’s use in religious services and as prescription medications), and the role that Prohibition played in politics (such as the way the support of opponents of Prohibition helped torpedo Al Smith’s presidential aspirations and how Mayors including Fiorello Laguardia and Jimmy Walker benefited from their negligible enforcement of, or downright flaunting of Prohibition).

Although it was not the most educational of the walking tours we have taken with Big Onion or other companies, it was fun and interesting.

Upper East Side: Clash of the Titans Tour

This fascinating and engaging Big Onion tour highlights the architecture and explained the inter-family and in some cases intra-family rivalries of the gilded age titans who made the Upper East Side their home. It discussed:

We saw and learned about some of the exclusive men’s social clubs whose members came from among those who “are” rather than among those who “do”.and about how the extravagant single-family mansions of the 1870s through 1910s began to give way to the more restrained, more secure, full-service—but also very upscale—buildings of the 1920s.

Then there were the families who owned the mansions. The tour discussed:

While many of the original mansions have long since been torn down or greatly modified, some, such as those of the Henry Ford Frick, Louis Pulitzer (who had his own feud with competitive publisher William Randolph Hearst), and the ornate Beaux-Arts Rhinelander mansion retain much of their original character. Most of the buildings have since been sub-divided into coops or sold to new wealth (such as The Pulitzer mansion to the Emir of Qatar). But a few are still open to the public. Examples include the Frick mansion (now the Frick Collection) and the Rhinelander mansion which has been beautifully converted into Ralph Lauren’s flagship store and retains many of the beautiful rooms.

Meanwhile, the shanties that were on the wrong side of the Park Avenue tracks have all been torn down to be replaced by high-rise apartments and coops and fashionable stores and restaurants. 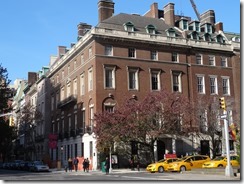 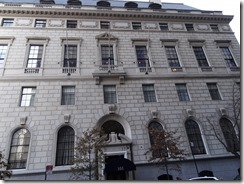 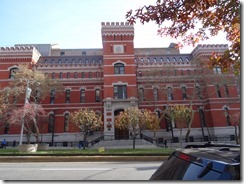 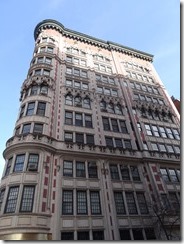 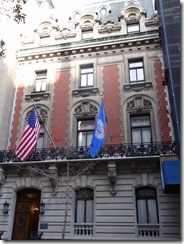