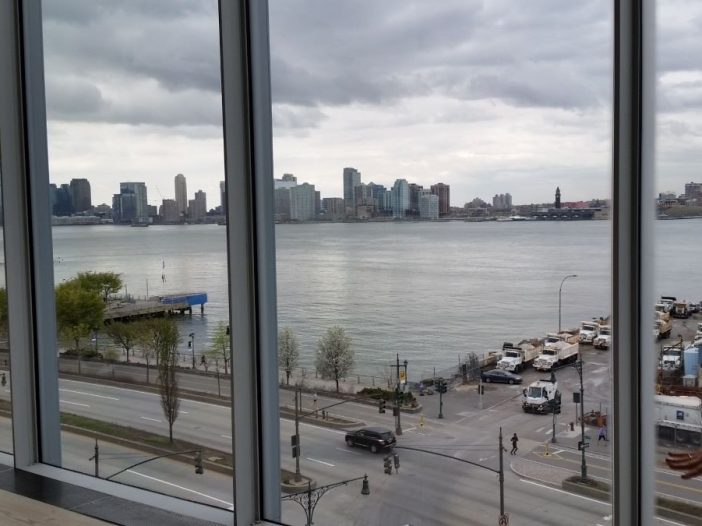 We were going to be in New York City on the opening day at the long-awaited, new Whitney Museum. We assumed that our prospects for scoring opening day tickets would be slim to none. In fact, after a phone call to the museum and following their Web site for weeks, we had even given up finding the day when tickets were to go on sale. So imagine our surprise when Tom opened his email the day before the May 1, 2015 opening to find an announcement of the opening of ticket sales.  And imagine his shock when he actually got them. We quickly changed our plans for the day as there was no way we were going to miss seeing the architecturally-praised building or especially the retrospective on American modern art that was assembled from the museum’s own permanent collection.

We were not disappointed!

The Whitney and Its Neighborhood

Master museum architect Renzo Piano designed the new building. It is a modernist statement settled at the base of the High Line and among the mostly traditional, low-rise Meatpacking District’s low-rise brick buildings. The views from the museum’s windows and decks are almost worth the price of admission.

The museum is a triumph. The striking glass-sheathed building is one of the most innovative museums in the world. It also provides links to the city’s past:

It is also designed to be as transparent and open to the neighborhood as possible. The first floor gallery is open to the public for free. Its glass walls allow some artworks to be viewed from the street and the High Line. Most impressively, the eight-story museum has four 18,000-square-foot exhibition floors that have no columns or fixed walls. Temporary walls can be hung from tracks in the ceiling as needed. Additional artwork is displayed in elevators, interior stairways, and on 13,000 square feet of outside decks (with a particular focus on David Smith sculptures).

Although many of the galleries are intended to primarily accommodate temporary exhibitions, two floors will be dedicated to displaying works from the museum’s percent collection.

When you enter the free first-floor galley (if you can find it), you come face to face with a painting of museum founder Gertrude Vanderbilt Whitney who is dressed in pants and lounging on a sofa. It is consistent with her mission of encouraging and training non-traditional, aspiring avant-garde artists. After all, the idea of a woman of the era (1916) wearing pants was so scandalous that her husband would not allow it to be hung in their own home.

The rest of the small gallery briefly traces some of the museum’s history and mission, displays some of its initial acquisitions and a set of 15 sketches drawn by American painting legend Edward Hopper (who was an initial student in Whitney’s classes and ended up leaving much of his own collection to the museum).

The museum’s inaugural exhibition consists of more than 600 pieces from the museum’s own 22,000-piece collection that is intended to provide something of a survey of American Art from 1900 to the present. The exhibit, titled “America is Hard to See”, is intended to demonstrate the changing perspectives of artists and their different interpretations of America and the forces shaping the country. It is organized chronologically around 23 themes, with each of the four floors dedicated to the exhibit representing a different period. Among the highlights (at least for us) are:

Floor Eight focused on largely experimental forms being pioneered from 1910 to 1940. It reflected how American Art was beginning to diverge from European art, the tensions between figurative and abstract representations (including Georgia O’Keefe’s effort to visually represent musical themes in Music, Pink and Blue No.2), and the various efforts to capture the promise and streamlined forms of the Industrial Age, and the advent of photography as an artistic media.

Floor Seven represented art from 1925 to 1960 (our favorite period). It portrayed different representations of inherently American themes (as highlighted by one of the museum’s signature realist paintings, Edward Hopper’s Early Sunday Morning), the fantasy world of Alexander Calder’s Circus, traditionally verboten themes (like George Bellows’ action-packed depiction of the Dempsey-Firpo fight, the impact of the recession and emergence of labor and Communist organizations, the influence of surrealism and the American creation of the Abstract Expressionist movement (as with Willem de Kooning’s Woman and Bicycle, Jackson Pollock’s drip paintings and Lee Kasner’s The Seasons).

Floor Six focused on 1950 to 1975. It began with reactions to the devastation and deaths of World War II, explored the representation of symmetric, geometric forms, the use of atypical (as in Jay DeFeo’s The Rose), and discarded material (exemplified by the work of Robert Rauschenberg),, reactions to the country’s prosperity-driven mass-market commercialism, and excess consumption and the emergence of Pop Art (Andy Warhol, Jasper Johns, Roy Lichtenstein, etc.).

Floor Five exhibited works of 1965 through today, Art dealt with traditionally taboo topics of politics (the Vietnam War); politicians such as Nixon and later Reagan; and overt portrayals of racism (as with portrayals of lynching and especially, Harry Sternberg’s gruesome lithograph of a castrated black lashed to a post). It also contained more subtle portrayals of troubling issues, such as Jean-Michel Basquiat’s Hollywood Africans and Fred Wilson’s Guarded View (with anonymous black security guards), and AIDs (as with Robert Maplethorpe photographs). Art then moved in yet other directions, as with the emergence of Minimalism and its use of technological materials and processes to fabricate artistic expressions (such as Richard Serra’s highly defined steel constructions and Eva Hesse’s more spontaneous pieces), performative storytelling (especially through electronic video media) and the absurdism of Jeff Koons and Keith Harring). Post-2000 art reflected the death and subsequent wars and politics resulting from 9/11 and contemporary social causes such as climate change, gender discrimination, and alienation.

Overall, “America is Hard to See” is a phenomenal initiation for an extraordinary new museum.