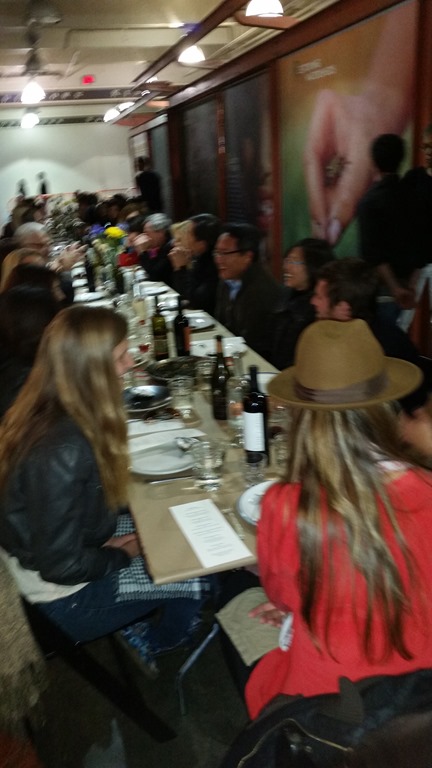 When it rains, it pours. We were recently enticed by two San Francisco pop-up dinners the weekend of March 18, 2015. We could not resist the menu for the Saturday Wild Kitchen dinner. Although we were initially less intrigued by Hog & Rocks Junju Korean BBQ menu, we decided to join some friends anyway. Neither the meals nor our reactions to them could have been more different.

We were totally enticed by the seven course Wild Kitchen menu by chef Ty Taub (previously of Guerneville’s Applewood Restaurant, who drew upon his own gardens for produce). The dinner consisted of:

And this did not even include an amuse bouche (Miyaki oyster with wild horseradish and wildflower garnish), a lemon popsicle intermezzo and a take-home dessert (a lemon square and SMORS cookie).

Sounds great, doesn’t it? We thought so and were looking forward to the event. Although the cost was $103 per person (including booking fees), it did include tip and taxes and we were able to bring our own wine, rather than pay restaurant wine prices.

While we knew the dinner would be someplace in San Francisco, we weren’t told the specific location until a day before the event (after all, it is a popup). At that point, we were told to meet at the Ferry Building (to the right of the main entrance) and to “dress in layers”. That got Joyce nervous and she carried with her a second coat, gloves and scarf. When we arrived, we found that dinner was to be held in an outdoor alcove (with wind blocks to keep the cold out and the body warmth in) and that the dinner included about 100 people. It wasn’t that cold, although Joyce did pull out her scarf until the wine we brought started to warm her up.

The noise level was high but the chef gave his talk about the food multiple times so that people could hear as he moved down the long line of communal tables. The dinner started out fine. The first few courses (especially the salad) were good. But things went downhill when we got to the pasta (which was overcooked and lukewarm) and the halibut (overcooked and lukewarm). Neither were very good as evidenced by the amount of food not eaten by us and our (now, after spending an evening talking with them) friends at the communal table. Could  the attempt to simultaneous prepare and serve 100 dinners proved be too much for the kitchen? Or was it the prep/recipe? If these dishes were prepared in more modest numbers, would they have been better? Wild Kitchen isn’t new to popup dinners. After dozens of previous dinners that have gotten rave reviews, we were surprised. So much promise, so much disappointment.  Do we risk trying a Wild Kitchen dinner again? Humm, let me think about it. No, not for a $300 night (including the wine we brought).

So many choices. Unfortunately we were told that our entire table of 6 had to agree on the same choices. Surprisingly as we are all foodies and all like different foods, we managed to agree on the same dishes in only a few minutes. We chose the beef tartare and pork belly for the second dish, the pork bone stew for the third and the short rib and sanddab for the third.

Each dish, even for non-Korean food fans like Joyce and I, was enjoyable, not to speak of the friendly and helpful service.

Not only was the meal a hit among all of us; at $45 per person for food, it was also a bargain. Perhaps we like Korean food after all!