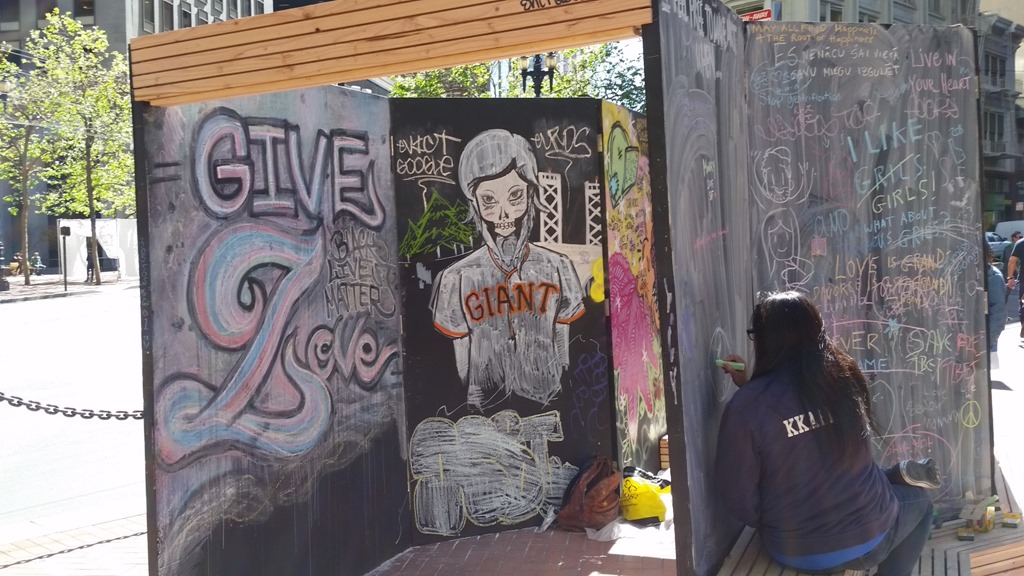 Our last blog post on the renaissance in San Francisco’s mid market examined the explosion of the housing supply. This blog examines its emergence as an arts district. Just as the previous blog was inspired largely by a walking tour by the San Francisco Housing Action Coalition, this is inspired by another event, the Market Street Prototyping initiative. This three-day event provided an occasion to preview potential designs for artistic enhancements to what is intended to be a transformation of Market Street from an uninviting utilitarian transportation corridor into an inviting, vibrant public space.

As discussed in the Mid-Market Housing Renaissance post, the renaissance generally began with the city’s payroll tax break that attracted tech companies including Twitter and Uber, Venture Capitalists and a growing number of restaurants, retail establishments and apartment towers. It will eventually include a re-imaging of the Street to make it a safer (probably restricted) transportation corridor and especially a more inviting, more imaginative and more art-friendly public space.

Its artistic transformation is already underway. Eleven new arts venues have either currently opened or scheduled to soon open in the area. These include ACT’s Strand Theater, PianoFight Theater, Women’s Audio Mission and Counterpulse. One of the new developments, meanwhile, will house several nonprofit art and education organizations in the 950 Center for Arts & Education—an artistic space that will contain performance art spaces, exhibit spaces and rehearsal halls, studios, classrooms and administrative offices.

There will also be much more outdoor public art. Some such art already exists on and around Market Street. These include the Pause sculpture/seating area/science exhibit at the head of Yerba Buena Lane, Caruso’s Dream suspended pianos at 55 Ninth Street (just off Market) and Yerba Buena Gardens’ Glass Ship, Urge and Shaking Man sculptures and the MLK Memorial wall and water fountain.

This is only the start. Most of the new commercial and residential developments, for example, will donate about one percent of the project’s cost to public art. The city will provide much more. That’s where the prototyping initiative comes in. The city solicited and received hundreds of proposals from leading artists, architects and designers. A commission selected and awarded $2,000 grants to create 50 rough prototypes that were displayed along Market Street, from the Embarcadero to Van Ness Street. These prototypes were viewed and experienced by tens of thousands of visitors who provided feedback on the designs. The commission will then select some of these designs to be created as part of the Better Market Street initiative; an effort to transform the uninviting utilitarian transportation corridor into an inviting, vibrant public space.

These prototypes, which were indeed rough, included everything from participative art pieces to performance spaces and modular display areas, to public exercise and relaxation spaces. There were numerous “neighborhood portals” which displayed art representing particular city neighborhoods, public art spaces on which pedestrians can create their own art and many public seating areas, including one in the form of a giant gold nugget.

We found some to be particularly interesting, and even appealing. Among our favorites were:

As shown in the event schedule, however, the prototyping festival included much more than a chance to see and voice opinions on potential art. There were also a broad range of talks, workshops and walking tours. We participated in two walking tours: