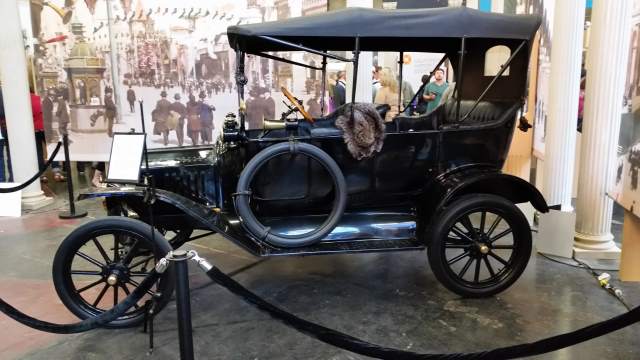 Sure, we have heard, and even had read a bit about San Francisco’s 1915 World’s Fair: the Panama-Pacific International Exposition, or PPIE. We knew that it prompted the reclamation and development of what is now the Marina district (that area that suffered many destroyed buildings in the 1989 earthquake because it was built on landfill for the fair), and that the Palace of Fine Arts was the only remaining structure.

Our knowledge and awareness of the fair, however, ended there. We remained blissfully ignorant of the nature of the fair and its long-impact not just on San Francisco, but on society. That ignorance was shattered this past February which was the beginning of a year-long celebration of the fair’s 100th anniversary. Our education began on the Palace of Fine Arts’ Community Day, the launch of an exhibit that provides an overview of the fair’s history, scope, composition and legacy. The exhibit, whith will continue into December 2015, explains the genesis of the fair, how it came to San Francisco, and the critical dual roles it played in:

This exhibit has maps that portrayed the fair’s huge scale (635 acres), pictures that showed some of the splendor of sites including the “Novagem”-clad Tower of Jewels and the grand columns opening onto the Avenue of the Nations, vintage American (including a visit from the Liberty Bell) and replicas of exhibits and period pieces. It also has numerous educational panels that explain some of the educational displays (such as operating Ford and Levi-Strauss assembly lines that actually produced cars and jeans, respectively), an operational post office and 80,000 other exhibits spread through dozens of grand exhibit halls.   It had cutting-edge demonstrations of new inventions such as a giant Underwood typewriter, the first infant incubators, electric car charging stations (yes, some of the first cars ran on electricity), the first transcontinental telephone call (from Thomas Edison, of course), dozens of new electric home appliances and acrobatic flight demonstrations. It was even the first opportunity that many had to even see a plane. Riders in Wild Bill’s Wild West Show, for examples, even stopped in mid-performance to watch. 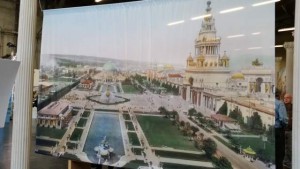 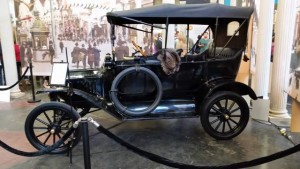 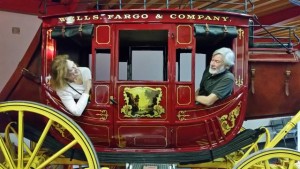 There was also plenty of art, including more than 20,000 pictures and sculptures (displayed primarily in the huge Palace of Fine Arts). And music too, where Hawaiian ukulele concerts launched a nationwide fad and prompted scores of Tin Pan Alley sheet music publishers to scour the islands for ukulele music. All of this was highlighted in an outdoor “Ukathon”, where dozens of musicians gave ukulele concerts throughout the day. And speaking of the Palace, it also has panels describing the heroic efforts of preservationists to convert the initially temporary structure and columns into a permanent building that survives to this day. So big and grand was the fair that it attracted 19 million entrants (including multiple entries from those with multiple-admission tickets) from celebrities and well-to-do patrons from around the world.

Although the exhibits closed at 5:00, the day was not over. Palace after Dark, which began at 7:00, showed the place, the colonnade and its pond in their full glory, lit with a lovely display of colored lights. Meanwhile, inside, they were showing a custom-created, 25-minute, three-screen movie that combined fair and other period photos/film with avante garde animated art—all set to music. (Although some segments were a bit drawn out, it was both educational and entertaining. 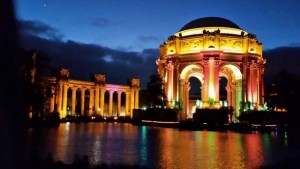 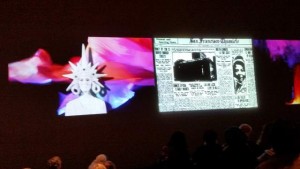 The following day, the California Historical Society (which staged much of the Palace exhibition) opened its own PPIE exhibit. This exhibit, whose highlight was a large, 3D scale model of the entire fair grounds, provided a more contemplative take on many aspects of the fair, providing architectural drawings, explanations of the conglomeration of architectural styles and how Bernard Maybeck pulled these and the landscaping together into an original and dazzling whole. It provided models of and discussed some of the artists (especially Alexander Calder) who contributed signature sculptures. 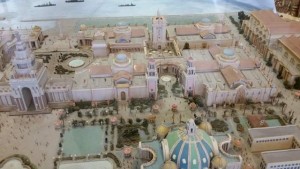 It provided highlights of some of the most important exhibits and provided details of the heavy participation of Asian Countries (in search of American tourists and trade) and the limited participation of many European countries ((many of whom were embroiled in the early stages of World War I). It discussed the role of women in the fair and many of the stereotypically negative portrayals of African Americans and Hispanics.

As if this weren’t enough, we decided to attend one additional event, a Commonwealth Club panel discussion of PPIE’s 100-year impact. The panel explained how the fair managed to fill all buildings despite the withdrawal of 20 percent of the initial exhibiters (due to a combination of the war and the global recession); highlighted the primary motivations for the fair; quantified the economic boost the fair gave to the entire Californian economy (the equivalent of $45 billion in current dollars) and how it helped establish San Francisco as the artistic capital of the American west. All this, however, is just the beginning of a nearly year-long PPIE celebration.

The beat continues with a March 3, 2015 relighting of the Ferry Building as it was throughout the 288 days of the exhibition plus dozens of additional specialized exhibits, lectures and panel discussions. These will cover issues including:

These and many other PPIE-related events are portrayed at https://www.ppie100.org/events/.