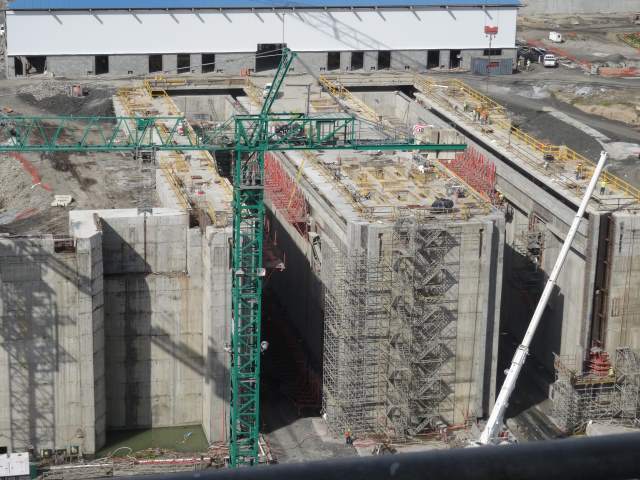 All good things must come to an end. After 7 days on our boat the Sea Lion, we were at the end of our journey though Costa Rica and the Panama Canal. We started by exiting the canal (and our boat) at Colon, Panama and made our way to Panama City by land. Colon, Panama. Once on our bus, we had a quick drive through Colon, a city founded in 1855 by the company that built the America’s first transcontinental railroad across Panama (see our post on the Canal). The city and land (at least that within five miles either side of the canal) was then taken over by the Americans as part of the Canal Zone, where it was used for housing, farms, factories and stores to provide goods for Americans living in the zone, and of course, an American military base. Now that the Canal Zone has been transferred to the Panamanians, much of the city has been converted to civilian use. The port, meanwhile, has been expanded to include huge new container handling facilities and a new facility built to handle cruise ships and their passengers. The area around the port, meanwhile, has been converted into the Canal Free Zone, a duty-free zone in which 7,000 companies now have outlets the sell to tourists and other foreign visitors who take these goods out of the country. Colon will also be the site for the third and final bridge that will span the canal. Atlantic Canal Observation Center. This observation center includes a theater that shows videos including one that examines the history of the canal and another that provides an overview of expansion project. (Both are described in our post on the Canal.) It also has an observation deck that allows one to view the construction of the new Atlantic locks and retention ponds and guides who explain the process and answer questions. 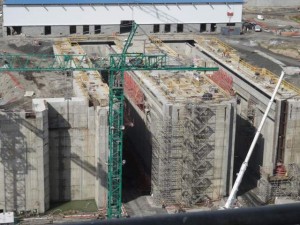 Miraflores Museum. This museum, overlooking the Miraflores locks, has four sections examining the history, the operation and the expansion of the canal, and one providing an overview of the insects and fishes of Panama. Although we have seen and heard most of this before, there were a few new features. These included a display representing the Marine Traffic Control Center (which controls the movement of all ships and the assignment of necessary people and equipment) and a simulator which allows you to experience (with time lapse video) the requirements for bringing a ship through the canal. But, while we knew most of material in the exhibit, we did learn some interesting new facts. Among the more interesting are that while the French and American projects excavated a total of 200 million cubic meters of rock and dirt, the expansion will be almost as large–150 million. We also learned that while bulk ships used to a count for most of the Canal traffic, container ships now account for half. And who generates this traffic? The largest users are, in declining order: the U.S., China, Chile, Japan and South Korea, Across the street from the museum, the former Clayton Base, which was the largest American base in Columbia. 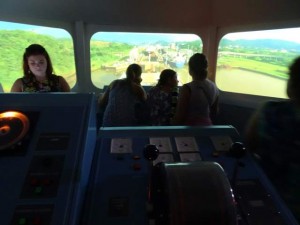 Bio Museum. This museum, designed by master architect Frank Geary, is currently only partially opened. Its goal is nothing less than to tell the history of the:

The museum is divided into different sections, beginning with one that traces the emergence of Panamanian biodiversity from the creation of the isthmus, which includes a panoramic video shown on three walls, plus the floor and the ceiling, portraying the diversity of life in environments from the bottom of the sea, to the forest floor, the canopy and the sky. It then provides a timeline that traces the history of the country and its life through the ages and concludes with a temporary exhibit hall (currently with an exhibit of fossils discovered during the canal extension) that will, when completed, be a horde by two 30 meter tall aquariums–one representing life in the Atlantic and one the Pacific. The star of the museum, however, is the Geary building itself, shapes generally like those of his Bilbao Guggenheim museum, but in a wild combination of colors, arranged in a way that is intended to represent the rainforest canopy. 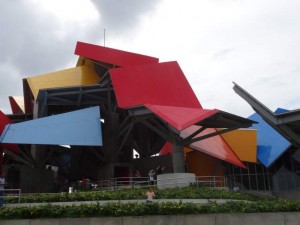 Casa Antigua, or Old Panama City, which was one of the earliest Spanish settlements on the Pacific coast. First settled in 1519, it was intended largely as a transfer point for gold bound for Spain, which made it a target of A number of pirate raids, including from Henry Morgan. It later became a transfer point for many other goods–including slaves–before Panama merged into Greater Colombia after independence. Although the oldest Casa Antigua building, the cathedral, was built from 1688 to 1714, most of the buildings are relatively new, from the early 19th century. While they are still in varying states of renovation, the Rea is pretty, especially the main square, awhile is flanked by grand buildings including the cathedral, city hall and transoceanic museum, and  the center, hosts a crafts market. While wandering the streets of the section,, we also ran into a treat–one of the buildings used to build and house characters for the annual Carnival celebration. At the edge of Casa Antigua, along the water, is another, very different attraction, Mercato de Marisco, a Fish market with stalls, fish restaurants and many, many people. 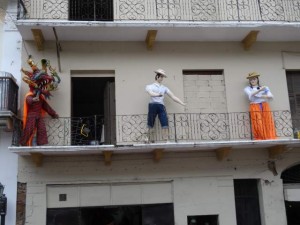 Downtown Panama. It looks more like an aspiring Dubai than the capital of a small Central American country. Fueled by the country’s booming economy, and enhanced self-image from gaining control of the canal–not to speak of the city’s growing role as a banking center and tourist destination–the city has been booming. High rise banks, office towers, hotel/casinos and residences everywhere, creating an imposing skyline that can be seen from the canal and from many approaches to the city. And all of this starting in 1997 with the first modern high rise and the rest built since 2000. Most of these towers are clustered on or near Balboa Ave, a main thoroughfare that runs along a pretty waterfront park. 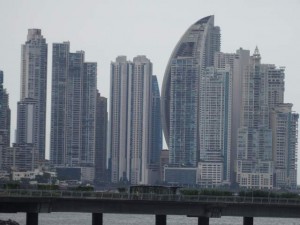 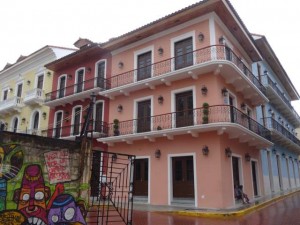 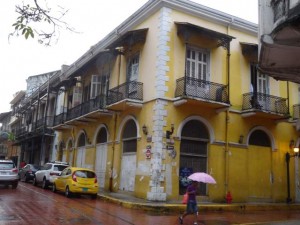 Along the route from Colon to Panama City, we also passed, but did not stop at a few other interesting sights. These included:

Our final night included a typical Panamanian dinner and tourist show of dancers. While very touristy and the dancers had a lot of energy, it was at the end of a long day and most of us had early morning flights and preferred an earlier night. We wouldn’t have done it on our own, however, and left the show early to walk a few short blocks back to our hotel. The next morning we boarded our flight back to San Francisco, which concluded our week’s trip through Costa Rica and the Panama Canal. 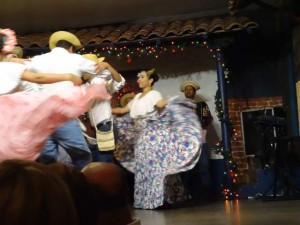