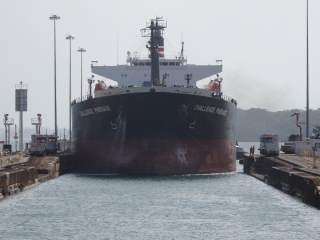 You might say that if you have been through one canal, you have been through them all. Yes, that’s true. But how many times do Americans get to go through something the size of the Panama Canal. That was our main purpose of taking a 7 day boat cruise on the 60-person Seal Lion run by Lindblad National Geographic .

One cannot just meander up to the Panama Canal and hope to get in. Boats need a reservation (which we had), otherwise they wait until there is a free space.

The Canal costs a fortune to operate and to maintain as it employs more than 10,000 people. That makes it expensive for boats to go through the canal–although maybe it is cheap when compared to having to sail around South America. Tolls vary by the length, weight and cargo of the ship. The cost of transit for our 150 foot passenger ship, for example, was about $15,000. A loaded, 450-foot container ship, by contrast, may cost about $300,000. The record price was $435,000 for a 5,000-passenger cruise ship. This can add up to real money, an average of $80 to $120 million per day and more than $3.3 billion per year, about $1 billion of which goes to the Panamanian government with the remainder retained for operating, maintaining and upgrading the canal.

Although we had a reservation to go through the Canal, we had some waiting time to await our entry. That gave us a chance to learn the history of and the process of building the canal by one of our Panamanian guides as well as by watching a David McCullough PBS video, “A Man, a Plan, a Canal, Panama.”

A Background on Panama and Its Canal

Panama owes much of its history, and even its independence to transit: first during the 14th and 15th centuries when the Incas crossed into Panama and began trading gold for local goods and knowledge about farming. Then in the 16th century, the Spanish used it as a land route for getting Peruvian gold to Spain (as a transit point from Cartagena, then to Cuba, and on to Spain); and now for its canal. But no matter what type of transport was provided, everybody always wanted and attempted to build more, better and cheaper means of transporting goods and people from the Pacific to the Atlantic.

Spain’s initial trail, for example, could only be used during the dry (or more accurately, less wet) season which lasted only a few months per year. It tried to create a new land-based trail and then explored ways of finding/building a water route across the isthmus. Then a group of Americans built a trans-Panamanian railroad to transport people, mail and products between the east and west coast of the U.S after the 1849 California Gold Rush. This effort, however, fell victim to the completion of the U.S. transcontinental railway.

The next big initiative came in 1879 when a highly capitalized, high-profile French venture planned to build a sea-level canal across the isthmus. This huge effort, which lasted about 10 years, cost almost $300 million and more than 20,000 lives, and ended in the largest bankruptcy in history to that date. This effort, as it was later recognized, was doomed from the start by a combination of the decision to build a sea-level canal, a lack of technology, the barrier created by the Continental Divide and mosquito-borne malaria and yellow fever.

Then, in 1902, came Teddy Roosevelt and his desire to establish a strong unified naval presence in both the Atlantic and Pacific oceans. While U.S. engineers initially decided to build a canal in Nicaragua, one of the engineers who worked on the French effort to build a canal (and still held land along the planned route) convinced the U.S. that the Nicaraguan site was too close to a volcano and that the Panamanian option would be a better choice. But at that time, Panama was part of Colombia, which tried to extract more money than the U.S. was prepared to pay. Roosevelt, therefore, financed and militarily supported a team of Panamanians to engineer the country’s independence from Columbia. The newly independent country, which had no experience in negotiating treaties, retained the French engineer (who had a vested interest in closing the deal) to negotiate for them.

The resulting deal not only gave the U.S. the right to build the canal, but gave it ownership of the canal and a five mile swath surrounding it, effectively cutting the new country in half. The U.S. began this effort not by launching s full-scale construction campaign, but with a comprehensive effort to proactively address the health and safety issues involved in building a canal and by creating a place where highly skilled employees would want to work. Then, Roosevelt installed an Army officer to oversea construction. It took more than $350 million and 50,000 men (skilled U.S. workers plus many more Caribbean and Latin American laborers), utilizing huge new construction equipment, modern technology and management practices, and more than 12 years. They succeeded brilliantly. Not only did they create an engineering marvel unmatched in history, they also beat their deadline and came in under budget!

Although the project and the canal itself were huge, unprecedented successes, American ownership and operation of a large swath that cut Panama in half eventually resulted in tensions between the countries. So, in 1977, the countries entered into a new treaty under which the U.S. would transfer ownership of the canal to Panama in 1999. This, combined with Panama’s linking its currency to the U.S. Dollar, helped to create an economic boom. For example:

The construction also had some unanticipated consequences. For example, although the higher elevations of the lakes and the river has generally kept salt water from impinging into the lake, some salt and brackish water fish do accompany ships through the locks and into the river and the lake. Although most of these fish have died, a few fish from species, including red snapper and tarpon, have adapted and now thrive in the fresh water lake.

But new times imposed new demands in the canal. World shipping has surged, pushing the canal to full capacity and forcing ships to endure long delays. Meanwhile, container ships and tankers are becoming too large for the canal. The largest ships the canal can currently accommodate are the so-called Panamax-class vessels; 160 feet in width, or enough to accommodate 13 containers in a row. New classes of Post-Panamax ships are far larger, carrying up to three times as much cargo as Panamax vessels. This prompted the country to expand the canal. It is for example:

Each of these new locks will be 427 meters long and 55 meters wide–larger than four football fields! They will not only accommodate the larger ships, but also increase the canal’s capacity by 25 percent and operate more efficiently by recycling 60 percent of the water now lost to the oceans when the locks open. But apparently, even this isn’t enough since China is now looking to build yet another canal; this one in Nicaragua.

After waiting at the entrance of the canal, we were boarded by a canal pilot who would guide the ship through the first two sets of locks: Miraflores (which takes us up 54 feet in two stages) and Pedro Miguel (31 feet in one stage). After passing under the Impressive Bridge of the Americas, the pilot guides the ship into the entry to the first locks, we are boarded by line tenders who connect bow and stern lines to the locomotives  that safely guide (but do not pull the ship) through the locks. 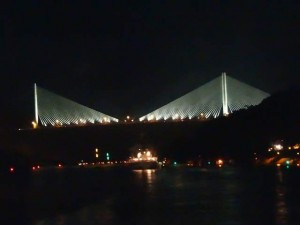 It is a slow but impressive process. We progressive toward the locks at only about 3 knots, punctuated by numerous pauses. Then, when we enter the locks and the gates close behind us, 26 millions of water is pumped in–entirely by gravity–at a rate of 2 million gallons per minute. Once our ship rises to the top off the lock, the front gates open, the ship’s engines are started and we, again with the guidance of our four locomotives, exit the locks. 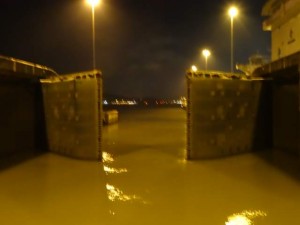 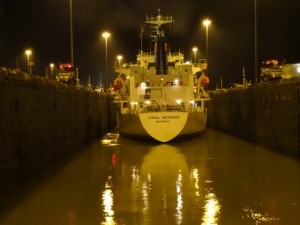 After we exit the Pedro Miguel locks, we enter and traverse the 12.5 kilometer Culebra Cut, the narrowest part of the canal and the section that required the most work to build: cutting down and removing huge quantities of rock and limestone that formed the Continental Divide.

The cut then deposited us under the recently completed Centennial Bridge into Gatun Lake, a manmade lake that was created by the damming of the Chargres River. The river, which continually replenishes the lake from rainfall in the surrounding mountains, feeds each of the locks. (Again, all of this water is moved exclusively by gravity, with no additional power required!)

We spent the night anchored just off an island–Barro Colorado Island–in the middle of Gatun Lake. After a visit to and tour of the Smithsonian Tropical Research Institute (covered in the next blog) we reboarded the ship to continue our voyage to the end of the lake, down through the three-level Gatun locks, where we went through the entire process again. This time, however, we were sandwiched between two huge Panamax vessels, the widest the canal can accommodate (one was one lock ahead of us: the other shared our lock). When we exited the lock, we were faced by three giant structures–a new generation of gates that will be used in the new locks. Following this were lines of giant cranes and lines of ships waiting to enter the Caribbean side of the canal. Our destination, a couple hours beyond the locks; the city of Colon, which is on the Caribbean coast. 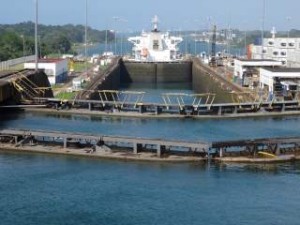 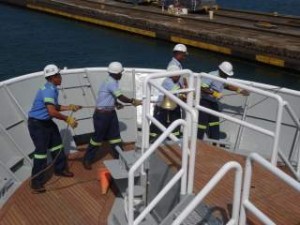 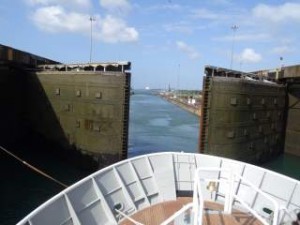 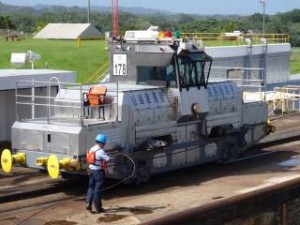 The 50 mile canal, which accommodates some 14,000 ships per year (a total of more than one million over its lifetime) has an incredible safety record: an average of only six accidents (almost all of which are minor) per year.