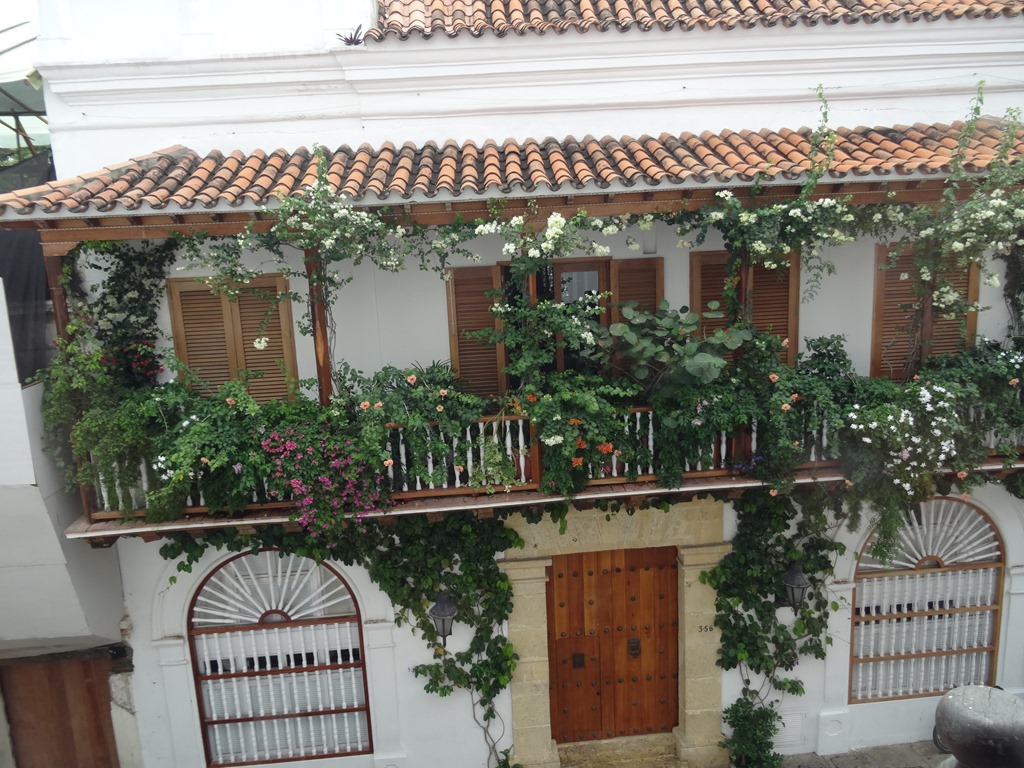 Cartegena, which had been settled since 4000 BC, was founded by the Spaniards in 1533. It rapidly grew into the country’s largest port in the Americas and a major trading center, especially for gold, silver and slaves. The resulting riches attracted more merchants, who built stately homes. They also attracted multiple attacks by pirates and the British.

Fearing the potential loss of this important port, Spain fortified the city with walls and a fort (reconstructed versions of which characterize the present city). Although the Catholic Church established one of its three American Inquisition Holy Office Courts in Cartagena in 1610, the city continued to grow and, In 1717, it became headquarters for the Spanish Viceroy. Foreign attacks continued, some of which caused great damage, but Spain held on. The city’s continued prosperity and new royal status attracted even more residents, including more wealthy merchants and royalty who built grander palaces.

Threats, however, continued from both external and, in 1811, from internal sources as the residents declared their independence from Spain. Spain, however, recaptured the city in 1815 in a battle that cost the 20,000-person city one-third of its total population. This desire for independence, however, was not to be quenched and Simon Bolivar and his men finally drove the Spanish out in 1821.

Freed from Spanish control, the city became an even more important trading city and attracted more merchants and immigrants from many countries throughout Europe and the Middle East. While the city’s population and prosperity continued to expand, it could not escape violence. Cartagena, along with the rest of Columbia, welcomed the 20th century with a civil war and then, in 1948, an equally bloody battle between liberals and conservatives for control of the country.

But by that time, the city had added new sources of wealth, such as through the trade of tobacco, coffee, sugar, platinum and especially, oil. It had also expanded its industrial production in areas such as textiles and petrochemicals and expanded well beyond its historic old town to grow a modern downtown business districts and many new suburbs.

These centuries of prosperity, combined with the city’s early decision to build stone buildings, to reduce the danger of fire, resulted in the preservation of one of the most historic and beautiful old town areas and World Heritage Sites in the world. This, in turn, brought a new source of wealth–tourist dollars.

Learning the City By Walking

To learn the history and the culture of Cartagena, we signed up for a walking tour with Kristy from Cartagena Connections. Kristy is an Australian who fell in love with the city three years ago and decided to stay. She has put together various walking tours, with an unusual model of the first people to sign up for a tour got to decide which tour they (and others who signed up after them) took. We choose the historical tour but Kristy also added in some food stops at some street vendors.

We ended up getting a surprise during the tour when a sustained cloudburst flooded the entire low-lying Old Town area with water that was in some places, knee-high. While flooding, we learned, is not all that uncommon, this depth of water is. Even so, while shops and bars flooded, cars stalled in the middle of the streets and boxes and all types of waste floated in the streets, life continued. And, since keeping dry was not an option, and the temperature was warm, after a brief stop in a covered entrance way, we continued our tour while plodding through the water. 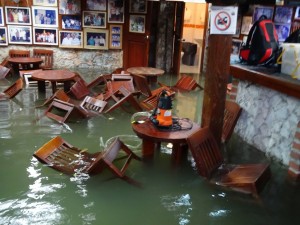 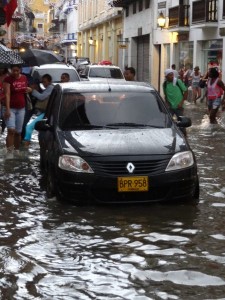 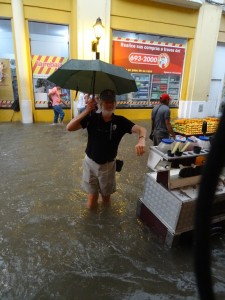 Kristy had a strong knowledge of the city, its history and culture and of its culinary traditions, especially of its street foods, some of which we sampled. The following is an overview of some of the interesting facts we learned about the four neighborhoods within the city wall: Old Town and the adjacent San Diego, Getsemani and La Matura neighborhoods.

First, each of the four neighborhoods had very different origin ins and characters. For example:

Among the more interesting tidbits of cultural information and trivia, we learned of:

In the next blog, we explore each of these areas in more depth.