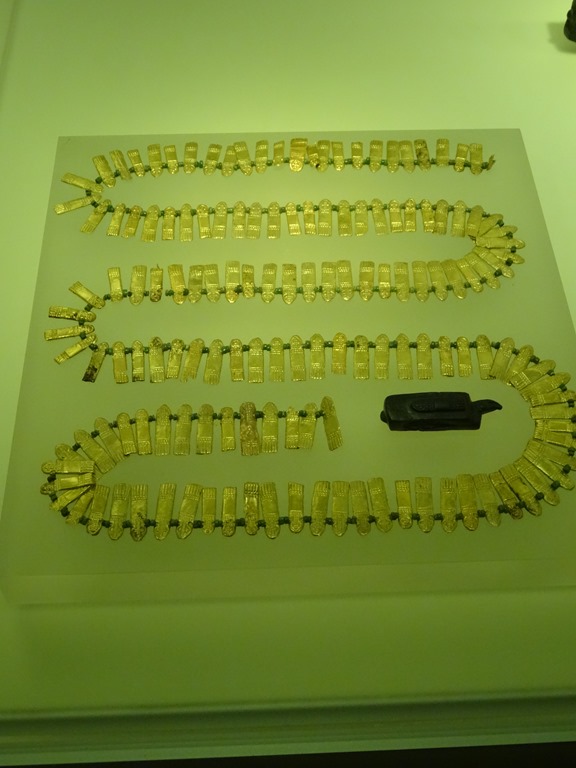 Bogota Columbia has many museums. We visited some of the more interesting ones (at least interesting to us), beginning with the two at the top of our list–the Museum of Gold and the Fernando Botero Museum.

Museo del Oro, or the Gold Museum, tells the history of gold in Colombia, from its cherished position among natives, to the devastation wreaked by Spanish conquistadors who would seemingly go to any length to plunder as much of the valuable metal as they could possibly lay their hands on. It contains over 34,000 gold pieces, plus 20,000 bone, stone, ceramic, and textile articles belonging to 13 Pre-Hispanic societies. The museum is divided into a number of sections, each focusing on a different aspect of the country’s history of gold, since its initial discovery and efforts to work with it in 2100 BC, through a history of the metallurgical progress made from hammering it, to creating alloys, to sintering and casting and the assembly of works from multiple components integrated into complex pieces. Other sections examine the roles that gold played in the country, and in different regions’ cultures throughout history; such as its role emphasizing the wealth and power of individuals, to its use in funerary services and how different type of images wee used to demonstrate societies’ values, beliefs and ideals of beauty. Other sections of the museum examined gold’s role in the civilization’s cosmology, such as its views of different parts of the universe, the differences, similarities and in some cases melding of flora, fauna and animals and people and how the wherein of specific gold symbols (such as chieftains wearing of Jaguar symbols and shaman’s wearing of bat symbols could give them certain powers of the animals. And as if the range, number and beauty of the hundreds of gold objects used to demonstrate these concepts weren’t impressive enough, the exhibit concludes with an amazing demonstration of a traditional ceremony where visitors are surrounded, by dazzling lit displays of gold all around and beneath you as a symbol of gold sacrifices into a holy lake. A very impressive, very professional display and explanation of the evolving role of gold in the country’s culture. 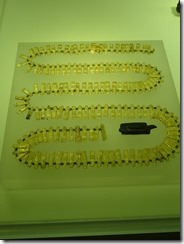 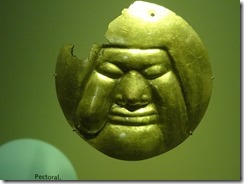 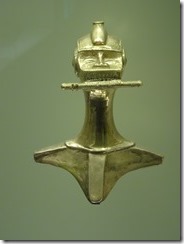 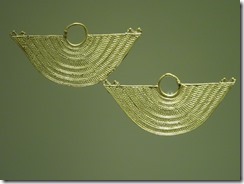 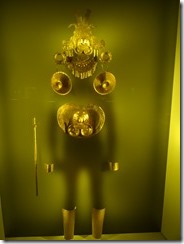 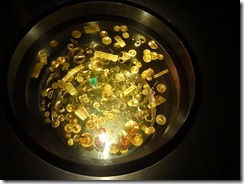 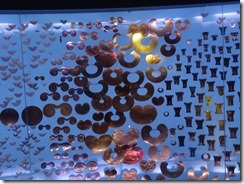 Museo Botero is devoted to the city’s best known native artist, Fernando Botero. If you have seen one of Botero’s paintings or sculptures of corpulent, Hispanic people, you will remember his work. You either like it or not. Frankly, while he isn’t is favorite of ours, when in Rome……

The museum, located in a former royal family mansion, contains Botero’s collection of other artists’ works (Picasso, Miro, Beckmann, Legar, Matisse, etc) as well as a number of his own sketches, paintings and sculptures. While the collection contained a number of still life’s and some action images (a massacre of people in a room and a town being destroyed by an earthquake) that we would not have associated with the artist, most were the type of portraits we knew.

Although we understand that the artist had become increasingly interested in plump Renaissance nudes, most of his figures (even of thin people) appear morbidly obese. Even more odd are his pictures of children, which while also obese, have old and often wrinkled facial features which are, at least to us, grotesque. We were told that Botero denied that he painted fat people or that he distorted their appearance. According to the artist, it is reality that is distorted! You be the judge. 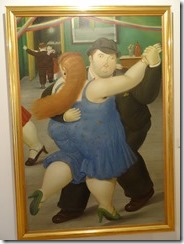 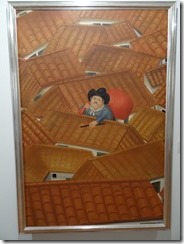 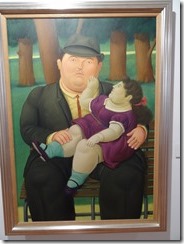 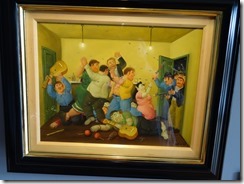 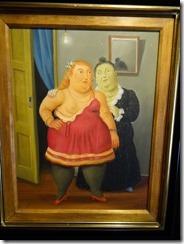 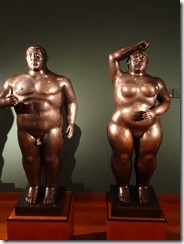 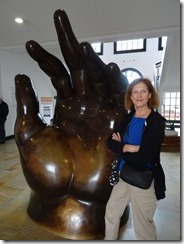 Casa de Moneda, which is right next to the Botero Museum, is primarily dedicated to Columbian artists, from the beginning of the 19th century to some interesting contemporary work. The museum also has a section sponsored by Banco de Republica that is devoted to Colombian coins and the machines that press them.

Museo Nationale. We had time for only a brief overview of this museum. And even if we had more time, the value we could have derived rom it was limited by the fact that all labels and explanations were only in Spanish. From our interpretation, however, it appears that the museum attempts to portray much of the last few hundred years of Colombian culture through art (especially portraits) and a few artifacts. The top floor, however, also provides a few galleries devoted to 20th century and contemporary Colombian art, from Botero to a few multimedia installations, and one to portraying one of the cells that the building (originally a prison) had contained.