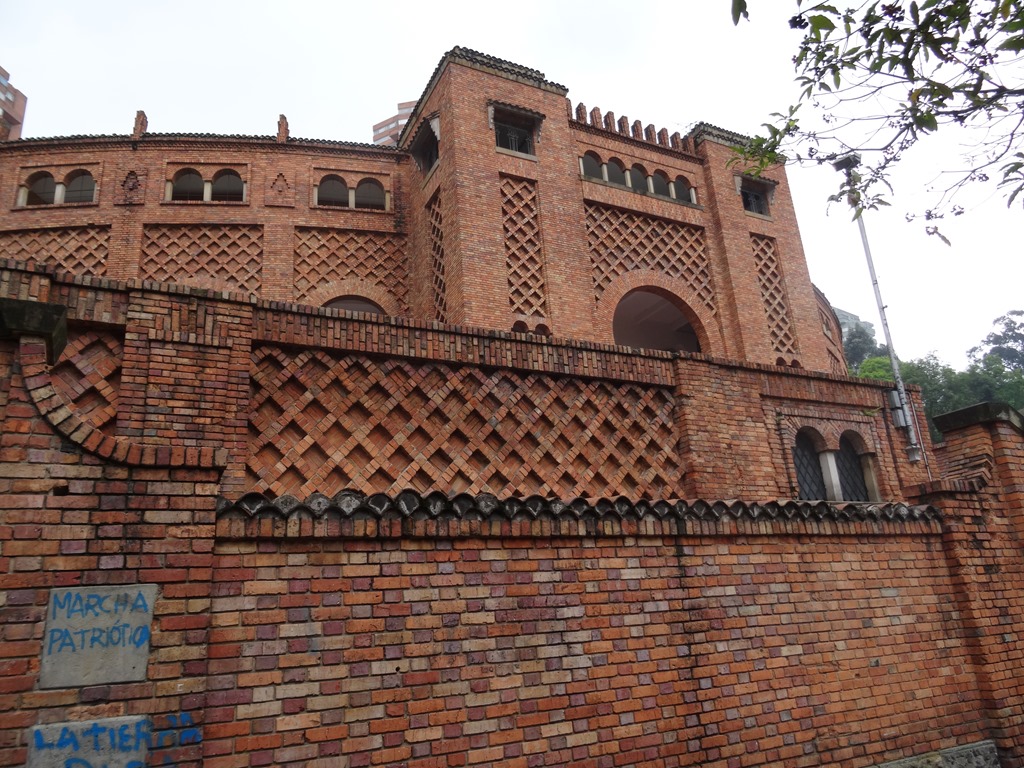 Believe it or not, we have never been to Columbia South America. Sure, the history of drugs and violence has been a little bit of a turn off but we understood that Columbia was getting safer and we decided to make an abbreviated trip there to visit to two major cities, Bogota and Cartagena.

Our first stop was Bogota, the country’s largest and capital city. We stayed in the centrally located, fashionable Zona Rosa neighborhood which is upscale hotel and restaurant central. Much of our time was spent in the city’s most historic section, La Candelaria, which also contains some of the city’s primary museums.

Any tour of Bogota’s neighborhood has to begin with La Candeleria, the area in which the Spaniards kidnapped the native chieftain and subjugated his people in 1538 and built the first Spanish homes. The free walking tour, led by Bogota Bike Tours, suitably began in Plaza del Chorro, the site of the stream (and current well) around which the Spanish initially settled. The Plaza and the narrow streets around it, still contain some 16th century buildings, and stretches to La Concordia, which now houses an interesting 100+ year-old produce market. We passed a number of examples of graffiti art that can be seen around the entire area and visited the large Plaza de Bolivar, around which the Cathedral, the national legislature, the Judicial chambers and city Hall are now located, and the nearby Presidential Palace. The tour also took us through the interesting Cartucho area, which after years of decline and violence, has been renovated as a popular commercial district that is filled with marketplaces and stalls, and tot he San Francisco church, the oldest in the city.

Throughout the tour, we also learned about the history of the country, from its 400 years under Spanish rule, through almost 100 years of civil war (though much of the 19th century), another 50 years of wars between the country’s two political parties, into the 1960s, after the political parties achieved a powers haring arrangements which disenfranchised and led to an armed insurgency by the FARC guerrilla movement and accelerated with the creation of "self-defense" militias and drug cartels. The chaos, which was especially pronounced in the countryside, drove more and more people into the city, spawning the creation of unrestricted barrios and swelling the city population from s mere 1200 to more than 8 million over the last hundred years. After all of this, the country has managed to create a relatively stable democracy, has steadily improved the economic well being of its people, has dramatically reduced the role of the drug cartels and is even in negotiations with FARC to end the insurgency.

One place we almost, but didn’t quite reach was Monserrate. The 10,000-foot mountain, which looms over the city, is the site of a 17th century church and a shrine for religious pilgrims. The primary tourist attraction, however, is the view, which can be accessed by a trail, a funicular or a gondola. Although we originally intended to hike the mountain, we were warned that the trail is often the site for muggings. As for the view, one of our drives to Le Candelaria passed the foot of the gondola, from which we could already see as far as the hazy conditions permitted. And, since we are more interested in what is happening in the city, rather than having a view over it, we decided to spend our time exploring, rather than viewing. 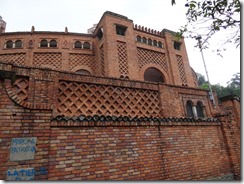 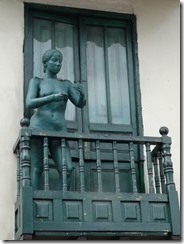 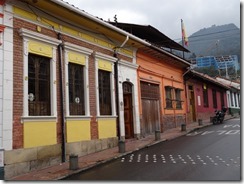 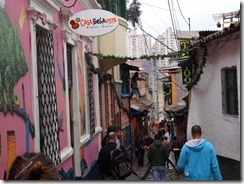 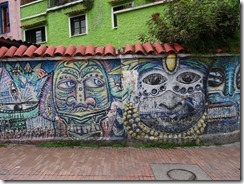 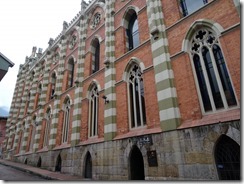 Le Macarena, just north of downtown, is the current artistic and bohemian center of the city, with artist studios and galleries, leftist bookstores and a growing number of restaurants. It also houses some of the city’s traditional cultural institutions (such as the main branch of the public library and the National Museum, which used to be a prison and continues to devote one gallery to showing an old cell) and the Museum of Modern Art, Independence Park, and the highly controversial bullring, the Plaza de Toros) which is currently closed due to animal cruelty, but which many are fighting to reopen it.

Unfortunately, the day we walked the area turned out to be a Monday (meaning the Museum of Modern Art was closed) and a national holiday (meaning than most shops–other than malls–and some restaurants were closed). Even so, we walked through the pretty, clearly transitional La Macarena neighborhood, past a number of the neighborhoods, landmarks and parks (such as the pretty, secluded Bavaria Park). We then proceeded north along Carrera 7 (one of the city’s primary north-south roads) to the University of Colombia, the huge National Park (which runs from the city, well up into the mountains). We passed some interesting sights, such as a pretty, yet incongruous row of multi-colored Alsatian-style half-timber homes, an exclusive club (Club del Comercio) surrounded by a tall stone wall, topped with concertina wire, and a couple of embassies (most of which have move north, from the city center).

We then reached Zona Rosa, the neighborhood that houses most of the city’s best hotels, its most exclusive retail stores, many of its most popular restaurants and much of its nightlife. But, while the neighborhood has many commercial streets and exclusive malls, some of the prettiest are upscale residential or a blend of homes and small, local boutiques, galleries and restaurants.

Since we stayed in the neighborhood, we ended up spending most evenings walking its streets, exploring its restaurants, fighting its crowds and absorbing its very active vibe. And, since we visited in early December, we also found ourselves at Ground Zero for much of the pre-Christmas shipping and in the modest of the incredible display of Christmas lights that shine in many of the parks, streets and stores. Overall, a pretty neighborhood that may be hard to distinguish from some in North American or European cities. 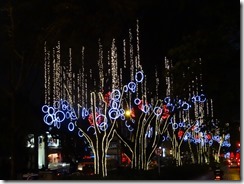 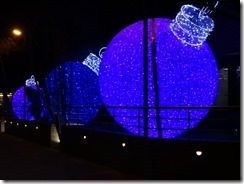 Bike Tour of North of Downtown

Although Le Candeleria (from about five blocks to 15 blocks north of the city center) is the historic section of Bogota, La Macarena (about 15 to 30 blocks north) the bohemian center and Zona Rosa (about 80 to 100 blocks north) is the primary shopping and entertainment area, there are many interesting areas in between and to the west of these tourist areas. We again enlisted the services of Bogota Bike Tours for a five hour bike tour to explore some of the more interesting of these areas. Our tour began in the northern section of Le Candeleria and passed a couple major sites in La Macarena (the bullring, The National Museum and Independence Park) before heading into new territory such as the traditionally upscale (until the city’s elite moved further north) but now still pretty middle class Checha and Telequello neighborhoods.

We passed the central city’s cemetery district (where we learned how the city created separate cemeteries for those who wished to be buried in special children, British and German cemeteries) and stopped at a section that recreates ancient Indian tombstones that represented deceased rulers (like chieftains and shaman) with animal characteristics that were symbolic of their ranks (and with whom Tom posed). 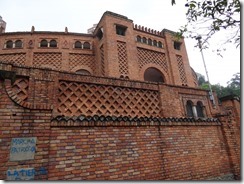 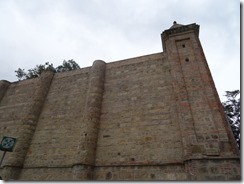 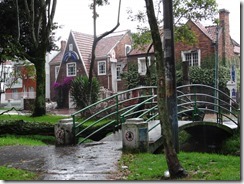 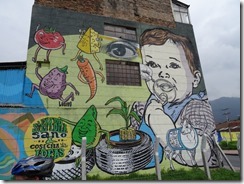 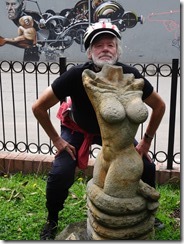 We then entered a few of the city’s sketchier neighborhoods (albeit not some of the more dangerous, such as those south of La Candeleria and to the east of the city, in the foothills of the Andes). These included that around the Santa Maria church, which is now the center of the city’s generally illegal (except in the case of rape, incest, deformity of the baby or risk to the mother’s life) abortion industry, and then through one of the city’s legal red light districts in which a number of women were flaunting their wares. Our guide used these stops as a means of discussing how Colombia, despite its deep Catholic heritage and in contrast to a number of neighboring countries, is relatively liberal in its policies to abortion, prostitution and other causes including euthanasia (which is legal) and drugs (the possession of small quantities for personal use was legal, has since been banned but appears likely to be re-legalized). We also stopped briefly in Santafe, one of the rougher of the city’s northern neighborhoods to listen to a performance where a boy rapped about the inequities of the political and economic systems.

The tour also included a number of learning and experiential stops, such as those that discussed the meaning of a number of the public murals (and how the city encourages and helps subsidize many of them), a small city coffee factory (where we sampled beans, learned the process and enjoyed samples) and a food market where we learned about and got chances to taste more than half a dozen local vegetables and fruits including yacon (a root vegetable), tree tomatoes and tomatillos (sweeter than U.S. versions), luto (similar to an apple), and different versions of passion fruit, including curua (more sour), granadilla (sweeter) and the custard-like guanabana. Our tour guide kindly shared this link that describes the various fruits.

Then, with our trip winding down, we made a special stop, at a local tejo bar. Tejo, as we learned, is the national sport of Colombia. The court is a roughly 40-foot lane with a clay pit at either end. Near the center of each of these pits are four small paper envelopes filled with gunpowder. Each player has a roughly three-pound metal disk which is pitched the length of the court in an attempt to hit an envelop, which explodes on impact. While we all had chances to test our skills, we soon learned, through experience, that the real object of the sort is less in hitting the target than in drinking beer with friends–a sport into which we all managed to master. 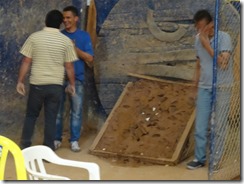 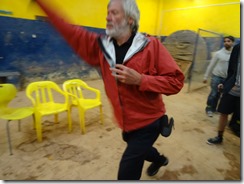 Other than getting caught in one of Bogota’s daily rainy season downpours, it was a fun and very interesting trip where a private discussion with the guide (a San Francisco native who spent a decades as a freelance political and economic journalist throughout South America) over coffee provided a bonus—A fascinating insight into the rapidly evolving political, economic and terrorism conditions in Colombia and a number of neighboring countries.