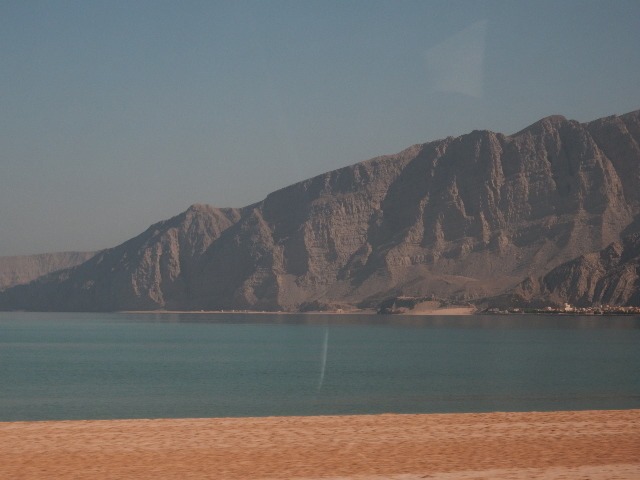 We made our way from Dubai to Oman, which is independent of the UAE (United Arab Emeritus). Oman is roughly the size of Kansas, but with much, much more variety. With its combination of oil, gold, minerals and fish, it is almost as wealthy as the UAE. Unlike Dubai and other areas, it is much more committed to maintaining its culture and traditions while still giving its people the type of life the country’s riches can provide.

Although we couldn’t begin to explore the entire country in a week, we selected four general areas that offered very different experiences and combined them into a single trip that included one flight, from a remote section in the far north corner of the country, to a couple of more centrally-situated sections. These segments were:

This blog explores the Musandam Peninsula and the Khasab area.

Our journey began with a roughly two and a half hour drive, courtesy of Khasab Travel and Tours, from Dubai, along the western coast of the UAE to the port in the city of Khasab. While the first hour of the drive, to the Omani border consists primarily of sand dunes and small hills, the scenery began to change as we approached the border, mountains began to rise around and ahead of us, with the road rising steeply into the mountains, hugging ocean-side cliffs and offering dramatic views of the coast, over the Strait of Hormuz into Iran, a mere 30 miles away. Along the way, we passed a couple of 16th century forts on one side and many speed boats that semi-covertly smuggle banned goods (such as American cigarettes) into Iran in return for Iranian goats and sheep (which are particularly pricy in Saudi Arabia. 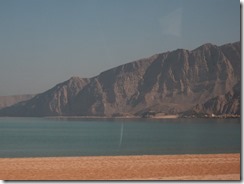 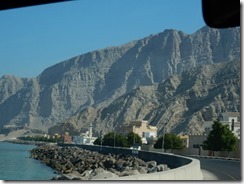 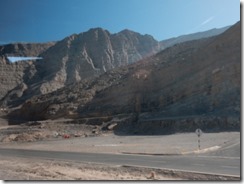 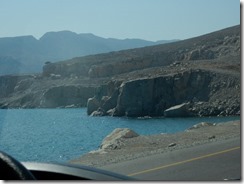 When we arrived at the port, we boarded a dhow (in the design of a traditional wooden fishing boat) for a cruise through the dramatic, barren cliffs of the Sham Fjord and past small fishing villages (very prosperous villages based on the government’s granting of exclusive fishing rights and providing them with free electricity, propane and Musandam Peninsula water). We proceeded to and stopped at Telegraph Island (through which the British laid the first Arabian telegraph cable in 1864). 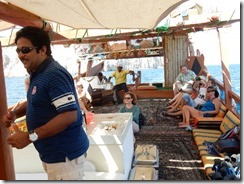 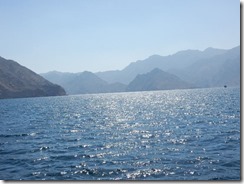 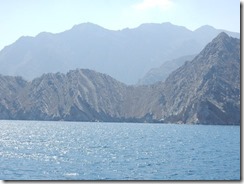 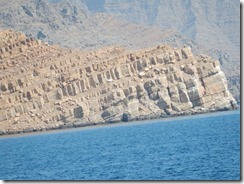 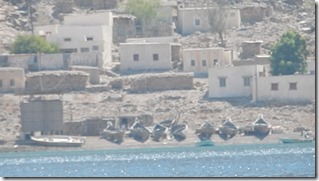 After an on-board lunch, we spent an hour of snorkeling among the island’s small, bleached brain and staghorn coral, sea urchins, a few species of fish (especially zebra, plus a few parrot and angel fish), and a few cormorants holding over from the summer fishing season. A second snorkeling spot, off Sebi Island, offered even less–other than the fjords themselves–to see. However, the water was very warm and, due to its high salt content, was very easy to snorkel in. 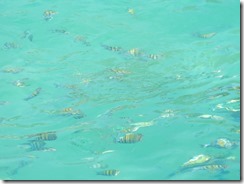 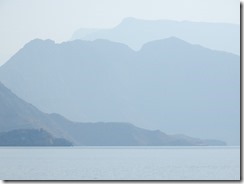 While in the area, we also took a four-hour tour in a 4-wheel drive vehicle into the mountains surrounding Khasab where we got close to the top of the region’s tallest, the 2,087 meter Jebel Harim. The drive afforded great views of the Gulf of Oman and the valleys and insights into the totally new life of traditional Bedouin villagers, as in the mountain village of Sayh (which we visited). While we saw a number of the stone huts that the Bedouins used to use for homes, they are now all but abandoned (or used to house animals) now that the government provides land and very low-interest, long-term loans to build modern new homes. Those who remain in their traditional villages are also now given  free electricity, propane and internet access as well as regular delivery of fresh water (remember, Oman is a very oil-rich country and can afford to keep people happy by giving them things). They are also paid or subsidized to maintain traditional livelihoods, such as date farming and the raising of sheep and goats. Most of those people that do remain in their mountain villages, however, often have apartments in Khasab and as our guide jealously, and only half facetiously explained, have one car for the mountains, one for journey’s into Khasab and a Lexus for going to Dubai. 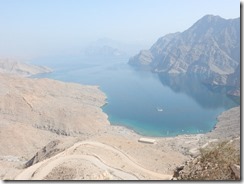 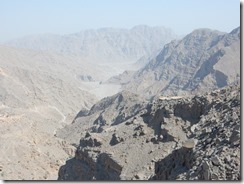 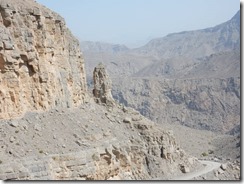 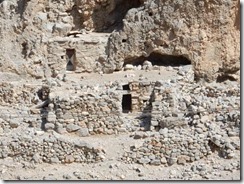 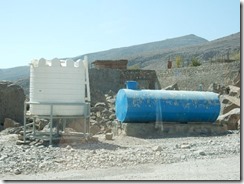 We learned about some of the native flora, such as the local acacia trees, the dust-colored Meez trees that have long needles as an alternative to leaves and the Jadha grass that smells like a cross between eucalyptus and sage, and around which some people camp to get relief from respiratory ailments. And then there was the ancient fauna, such as the fish and shellfish fossils from the days the mountains were part of a seabed. The tour also included a brief spin through Acacia park which although a green picnic spot in the rainy season (December through February) is currently being used for the grazing of sheep and goats. 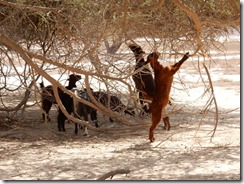 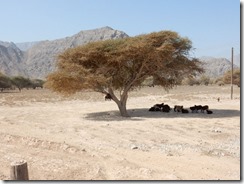 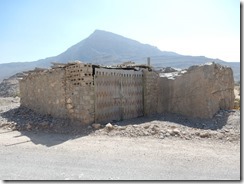 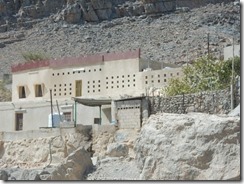 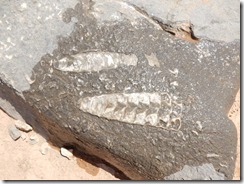 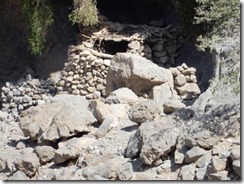 We also ventured a brief walking tour of the town of Khasab where we discovered that the entire town seems to close down at 2:00 (which was when we were there). Unfortunately, this included the 16th-century Khasab Fort and museum which was supposed to remain open until 4:00. Luckily, however, the city’s largest attraction was still open–Lulu’s Hypermarket, a chain that is a cross between giant supermarket and a Wal-Mart. This huge store remains open from 9:00 AM to midnight, despite the fact that when we were there, there were five cars in the parking lot and about five employees for every shopper. 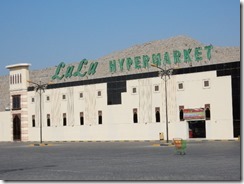 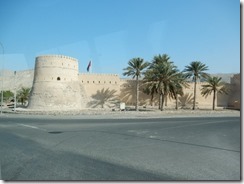 I don’t think there is such a thing as a luxury hotel in Khasab, however the Atana Khasab Hotel (formerly called Yellow Tulip) was clean and comfortable. It is located on a headland, with beautiful views of the sea and mountain. If you choose to try to catch a fish from the pier, they would clean and cook it for you. We didn’t try our luck with that however. Although it is slightly out of town, the hotel has a free shuttle that will take you to and from the town. All you have to do is to call them (or, since we didn’t have a phone, ask anyone in town to call them) and they pick you up.

A large outdoor pool helps you cool off from the hot days and where Tom was able to get in some exercise swimming laps. It has a large outside space where you can eat or drink (it did cool down nicely at night which allowed us to eat dinner outside). Breakfast has a large selection of food including cereals, breads, hummus (which seemed to be on every breakfast, lunch and dinner menu in the UAE), eggs, sausage etc. We ate dinner there both nights. The first night we had a Mixed Arabic Grill with shish taouk (chicken chunks are marinated in yogurt, lemon juice, and several spices before being skewered with onions and bell peppers), shish kebab, kofta and lamb chop; and a Fisherman’s Platter with grilled lobster, jumbo shrimp, hamour (a local fish), and calamari with lemon butter and garlic mayonnaise sauces. We did the buffet the second night. The food was reasonably good, although, as usual for a buffet, some items were sitting over the steamers a long time and were not in the best shape. But they had reasonably-priced wine, so it all worked for us.

We also were able to eat lunch one day at a local restaurant named Al Shamalya. It  fairly basic place where we had a squid biriyani, shery (a local fish) biriyani and a delicious (and pretty)  fruit drink made of banana, mango and decorated with radish juice). 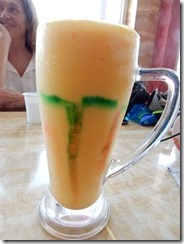