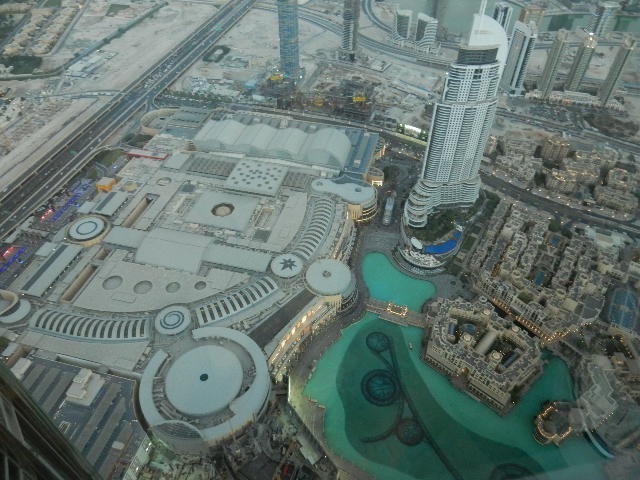 Qbara, one of the hottest new restaurants in the city, is a beautifully and expensively designed two-story showplace with hand-carved wood and hand-woven cloth details. The restaurant, which specializes in an an eclectic Arab fusion cuisine, offers a large number of small plates in addition to a handful of larger plates and a prix fixe menu. We found more than enough small plates to keep us happy, our greatest challenge was in narrowing them down to the number we could comfortably eat. The assortment of middle-eastern breads was okay, but less than inspiring. Our favorite dishes were lamb meatballs with foie gras and a grape leaf-wrapped roasted quail. While I enjoyed the lobster kibbeh with a avocado sauce, Joyce was less impressed. We did, however, agree that the grilled red prawns was the weakest of the dishes we tried. Overall, very nice and very expensive–especially the wines, which start at more than $100 a bottle.

Burj Khaifa At.mosphere Lounge, dinner here was something of a miscommunication with our hotel concierge. We intended to have dinner at the restaurant, but ended up at the lounge, with its very abbreviated menu instead. However, we were somewhat lucky to get in in the first place. The reason?  First we had to get past the woman at the check-in desk for our reservation.

It started with “the stare” similar to one you get from someone that wants to make you squirm. Finally she spoke: “Sir, we have a strict dress code and your shoes aren’t acceptable”. (Since we were traveling for a month of trekking and safaris, Tom didn’t bring a pair of dress shoes on our 4-week trip). Stare, stare, stare for 15 seconds, expecting us to what….melt? get on our knees? plead? beg? cry? Whatever. “So what do you suggest”, we asked? “Can you go back home and change”? “No, home is 8,000 miles away and this is all I have with me”. Stare, stare, stare. No movement, just the icy stare, waiting for us to squirm. We don’t move or say anything or blink. Another 15 seconds go by. “Can you go back to your hotel?” she asks.  “No, Tom’s shoes are in America so that won’t solve the problem.” More staring as seconds tick by. “So now what?” I ask. “We will give you some shoes to wear then.” OK, if you have shoes that one can borrow (and we saw multiple people needing them), why the staring and attempt to intimidate? Why tell us to go home to change? Amazing customer service at it worse. Fortunately, everyone else was very pleasant and helpful….including the person who gave us (and others) acceptable shoes.

Having gone through that gauntlet, we were then allowed to enter and be seated at a window seat in the lounge. Since meals were so limited, Tom had a small six-ounce ribeye and Joyce a trio of Wagyu beef sliders. Both were okay, but certainly nothing to write home about. Add in three glasses of wine and dinner cost us $300–but it did come with quite a view.  After all, the Burj Khaifa is tallest man-made structure in the world at 2,722 feet. But you lose some of the effect when looking out over miles and miles of ocean on one side and sand on the others and between the surrounding high rises that appear as little more than specks. 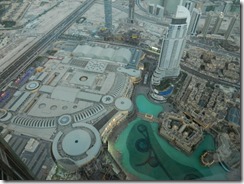 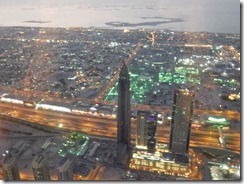 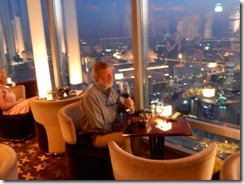 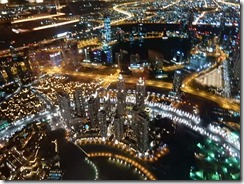 Abdel Wahab Restaurant. Our concierge highly recommended this Lebanese restaurant. Tom was intrigued by an item called "Grilled Bird", which the menu described only as six birds in pomegranate sauce with lemon. The server had no idea as to what type of birds these were, but did recommend them. He ended up with a plate with six tiny headless birds, each between one and 1.5 inches in length. After he began to try to extricate the tiny amount of meat from the delicate bones, the server helpfully suggested that they were intended to be eaten whole, bones and all. Ever game, Tom followed instructions. Very crunchy and much easier than hisinitial efforts. Overall, pretty good, but not especially filling. Luckily, Joyce offered to share her kafta skewers (lightly spiced minced lamb). Overall, a god meal, but not especially memorable. But, as a bonus, we saw were able to see the daily fountain show outside the Dubai Mall. Even better, we caught the even more spectacular nightly water show that evening as we were walking to the hotel from the At.mosphere Lounge. 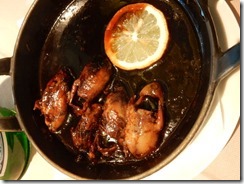 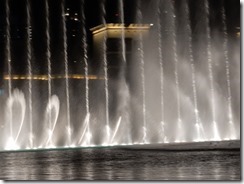 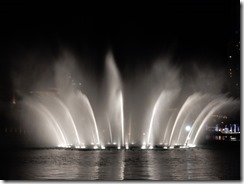 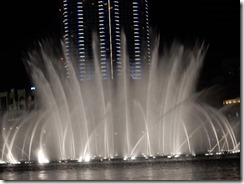 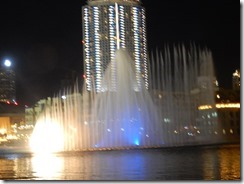 Reen Al Bawada. This Iranian restaurant, located in the middle of Dubai Marina, provided our final chance for regional cuisine. While Joyce focused again on kafta, Tom opted for the grand sampling provided by the mixed grill, consisting of a combination of lamb kebab, chicken taouk (kebabs), kafta, lamb chop and the only disappointing note of the evening, a slice of Mediterranean bread stuffed with minced lamb, cheese, mushroom and mint. And since non-hotel restaurants can’t serve alcohol, we decided to finish our meal with a few (actually many) tokes of a shisha (aka hooka or waterpipe) flavored with coconut. 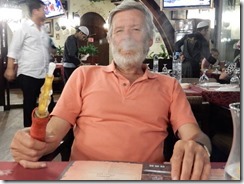 We stayed in 2 different hotels in Dubai: Raffles and the newer Oberoi. Both offered excellent service and very comfortable rooms. We’d be hard pressed to suggest one over the other. But what caused us to rate the Oberoi higher was that we could hear the kids in the room next door to us at Raffles (yes, we were on the Club floor, which is well worth the extra price) and people passing by our door in the hallway. We realize that our noisy neighbors were beyond the hotel’s control (and shame on the parents for allowing the kids to scream and shot at 11:30 PM at night and then again at 7 AM), they could have better sound-proofed the rooms. It’s too bad that the noise spoiled an otherwise spectacular stay.