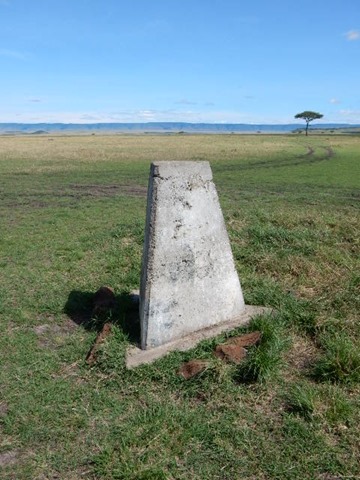 The border between Tanzania and Kenya Africa was only about five miles from our safari camp, marked, at least at our location, only by a concrete post on a dirt trail. As you cross this border, you leave Serengeti National Park (Tanzania) and enter the southernmost realms of Masai Mara Park (Kenya). 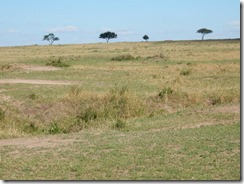 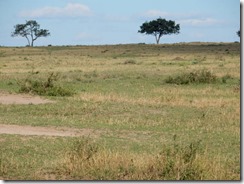 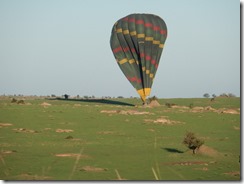 The landscape of this border region, which Is very different from the Tanzania section of the park, consists of long expanses of grassy plains, punctuated only by by a handful of trees, especially the graceful acacia and green thorn trees, a scattering of animals–scenery much more like that of the Southern Serengeti (which we flew over, but at which we did not stop, except when our small plane landed at two airstrips en route to our destination). The plains, punctuated by a couple hot air balloons in southern Kenya, led to an escarpment. Date palms lined some of the larger streams.

We went into this area early one morning primarily to search lions and cheetahs (ideally on the hunt for breakfast) that live in the area. We found much more.

The scenery was beautiful and the wildlife plentiful: with many, many herd of impala, topi, Thompson’s gazelle, water buffalo, elephant families and a few herd of wildebeest stragglers that had not yet made it down to the Mara River. We also saw smaller numbers of giraffe and zebra and a few ostriches racing toward some unknown destination.

Many of these herds had young babies. A few were particularly precious, not only because of the babies, but also for the ways in which the mothers cared for and protected them. When our driver dared to approach a small elephant family with a six-month old baby a bit too closely for their comfort, the largest elephant walked warningly toward us and bellowed. Another huddled closely over the baby. Parental concern at its finest. And on what must have been family day, we saw a family of warthogs, with two adults and four babies, running improbably swiftly on such short legs.

We then hit a family day jackpot. Our guide spotted a lioness with three tiny days-old cubs nestled deeply in some brush. Needless to say, she didn’t welcome our presence. She stared intently and, as it became clear that we weren’t about to leave, picked the tiny cubs up, one by one in her mouth, and carried them to a location out of our sight. Then, with a final warning glare at us, she settled cautiously back into the bush until we left. Not the hunt or kill for which we had originally hoped, but priceless nonetheless. 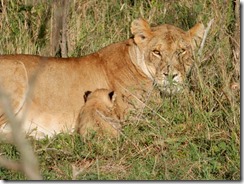 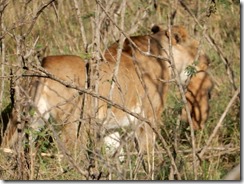 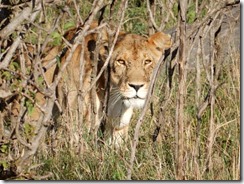 We then ran into a couple lovely cheetah, lounging contently in in the shade, rising only to stretch; a lion atop a rock outcropping, serving as sentry for her pride of eleven in the bushes beneath. and evidence of a leopard in the area (a tree with claw marks on its trunk and a very recently killed carcass hanging from one of its branches. We didn’t see the leopard, but it was a close miss). 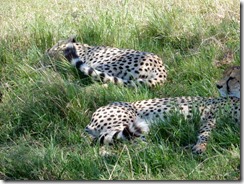 Our morning excursion also produced a tawny eagle (our first eagle sighting of the trip) devouring a mongoose he just killed–and a couple of vultures waiting patiently for whatever scraps the eagle may leave. 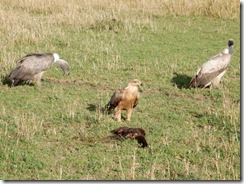 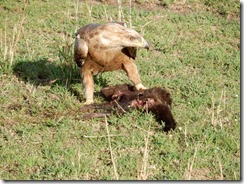 Interestingly, as we learned, this border region would have had a totally different character a few months ago when none of this diversity would have existed. The entire plain would have instead been filled by millions of wildebeest gathering in preparation for their Mara River crossing and their migration to the south. Unfortunately, the residue left by millions of wildebeest draws billions of flies. Even the Land Cruiser’s standard provision of fly swishers weren’t enough to deter these pesky insects as they swarmed all over all of us. We felt that we were hunted by them!

When we returned to the morning’s lion pride of eleven had left the bushes to join their sister atop the rock. None, however, appeared to even seriously think of getting up (other than to find a more comfortable lounging position), much less of going out for dinner. 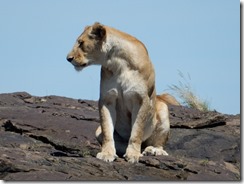 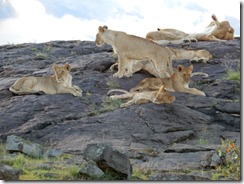