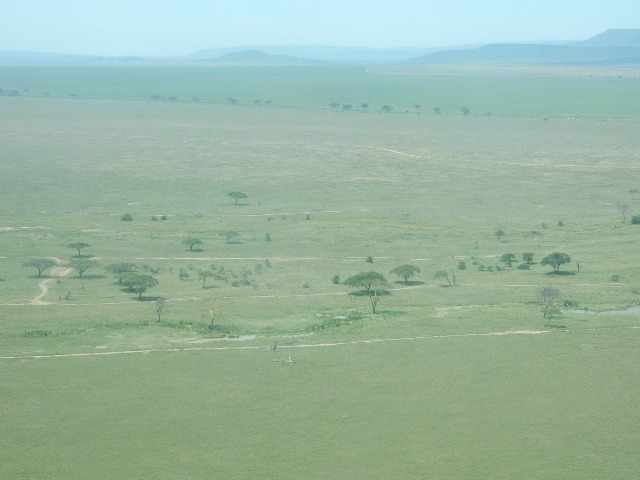 After four days in Rwanda, our next stop in Africa was Tanzania and the Serengeti. Our Coastal Airlines 14 passenger Cessna prop plane took us from Kigali Rwanda, over the large, irregularly shape Lake Tanganyika, making 2 short stops en route on dirt runways (one for us to get our visas and one to pick up some passengers). The land was a huge great plain, stretching to the horizon, interrupted only by scattered trees and occasional herds of zebra and other hooves animals. We finally reached our landing spot Kotagende, the transport hub for this region which consists of a dirt and grass airstrip, a one-room tin terminal and a large number of range rovers dropping off and picking up a continual flow of passengers. 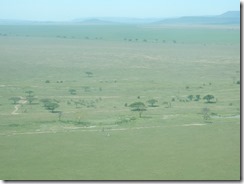 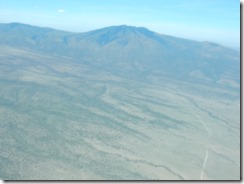 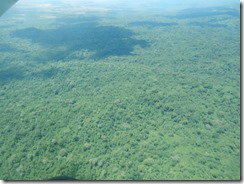 We divided our Tanzanian trip into three primary sections:

This blog concentrates on the Northern Serengeti.

Although Serengeti National Park covers a large region, we chose to visit the furthermost Northern section known as Lamai Wedge, which is located between the Mara River and the Kenyan Border for three reasons. First, it is the most remote, least crowded section of the park. Second, it is supposed to have the greatest concentration of game and the most beautiful scenery. But most importantly, it is the site of the Great Migration river crossing, where millions of wildebeest (and assorted zebras mixed in) brave packs of famished crocodiles as they cross the Mara River in search of their next source of fresh grass.

We spent our Serengeti visit at Alex Walker Serian North, a mobile, tented camp that moves twice a year in search of the best game viewing. Although not as luxurious as some of the fixed camps at which we stayed on our first safaris in 2003, the tents are large, with a spacious bedroom, a covered patio with lounging bed and chair, and a large bathroom with flush toilet and shower. While it does not have running hot and cold water, a five minute notice provides access to a hot bucket shower, where the staff uses a pulley to haul hot water to a tank mounted above the roof. The shower has 2 cords: one to start the water flowing and one to stop it. When the bucket emptied, they were right there to fill it up again. The camp also had a large sitting room/office, a dining tent where everyone sat at a communal table and a campfire area where we all met for pre-dinner drinks to exchange experiences. 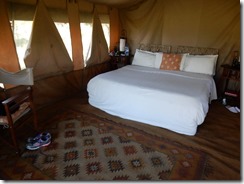 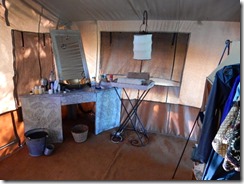 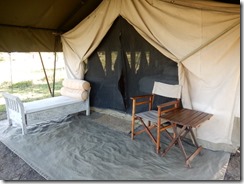 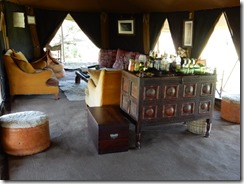 Wildlife was plentiful as any jeep ride was sure to provide views of zebra, giraffe, eland, wildebeest and antelope (including eland and topi), vultures, and crowned cranes. But we were in search of the wildebeest migration.

After lunch at camp, we were ready for our first visit to the river in search of large herds of wildebeest leaping from the banks into the Mara River. This is easier said than done and we hoped we had timed our trip right. After all, while the migration follows the same route and the same general schedule each year, nature is not bound to schedules. Variations in heat and rainfall can change both the course and the timing of the migration. We had to guess, with the help of historic patterns, when the wildebeests would reach the Mara River for the famed crossing. And since we had to make reservations many months in advance, we had to pay our money and take our chances.

There’s also a more subtle issue of timing. The classic Great Migration experience depends not only on the arrival of the wildebeest, but also the hunger of the crocodiles that guard the river the wildebeests have to cross. Too early and you arrive before the wildebeests: Too late and the crocs’s appetites have already been sated and they allow the antelope to cross unharmed.

And even if your timing is right, wildebeests are usually in no big rush to get to, much less take the great leap into the river. The herds move very slowly and continually pause for grazing. When they do finally approach the riverbank, they still are in no rush. They generally just mill around, waiting for hundreds or often thousands of their comrades to join them. Then they wait some more, often taking detours before eventually getting to one of the ten primary crossing points (where the banks aren’t too steep, water not too deep or the currents too strong). 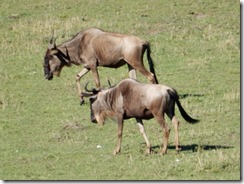 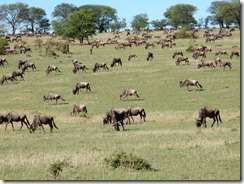 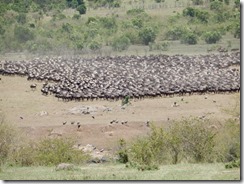 Even then, wildebeests are incredibly skittish. Any unexpected sight or sound can cause them to sprint off in a totally different direction, with little apparent rhyme or reason for their actions. When they finally do reach the riverbank, if they anticipate any danger and panic, they will often turning around and race back in the opposite direction. And when one turns, the rest follow, all in a similar sense of panic. Then they wait, and head off in other directions yet again. We sat through many false alarms.

Even when they appear poised and ready to enter the water, it may take hours for the first one to jump in. When the first one takes the plunge, the rest of the herd seems to panic at the prospect of being left behind and they start to follow. The mass turns into a line, or sometimes splits into two or three lines of creatures stepping, leaping or being pushed into the water. The wildebeests are often joined, or more likely followed by a handful of zebra. The crossings generally continue until all but a handful are left. At some point, one seems to chicken out and stop. It and the other stragglers will typically turn back from the bank and wait for another herd to assemble before trying again.

Thousands may enter by the time the time all make it. Or, one may panic, turn around and prompt the others to follow suit, sometimes waiting for the next herd to catch up before going through the entire process again-resulting in only a few hundred animals in the crossing. 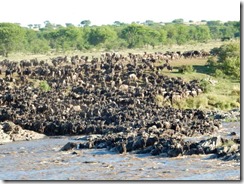 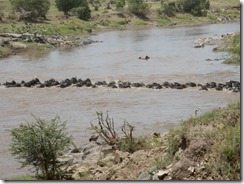 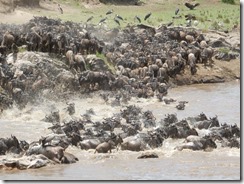 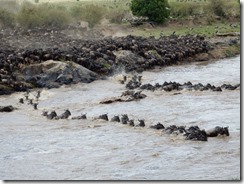 Once in the water, they are in another panic to get to the other side, up the bank and to continue their migration. Some, especially the smaller, younger animals flounder and drown or are carried downstream away from the herd by the current. Some, when the crocs are hungry, end up as dinner. The vast majority, however, make it to the other.

Our first visit to the river worked out perfectly. Our guide got a radio call that a huge group appeared ready to take the plunge and we got to the crossing just in time to catch the grand entry of thousands of animals. It was an amazing spectacle. Fortunately for the wildebeest and the zebra, but unfortunately for the vultures and us, the crocs weren’t hungry. Give what we read, saw and were told of the croc encounter (including from people who saw two the previous day), we had to try again.

Our second attempt to see the crocs go after the wilderbeests required us to travel to another crossing spot and wait about an hour. While that was no problem, it turned out to be quite small crossing with only a few hundred wildebeest. But again, nary a croc in sight. So we had to try another time which, after one false start, required almost a three hour wait. It, however, was spectacular, with thousands of wildebeests (and three whole zebra) taking the plunge. And yes, I do mean plunge, with some leaping of rocks that were about six to ten feet above the water. Amazing sight, albeit again, with not a single croc in sight, either in the river or on the shores. Then, in our final attempt to see a croc in action, we hit a fourth nice, but uneventful crossing. 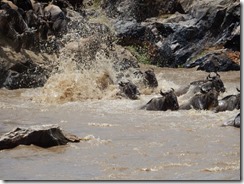 Driving along the river, well away from any current action, we did indeed see some crocodiles along the bank, some so stuffed that their stomach were bulging and they probably couldn’t move if they had to.

Although we were disappointed in not seeing an attack, our disappointment paled relative to that of some other bystanders—the vultures who feed on the remains of the wildebeest carcasses. They were everywhere, poised near the riverbank. These scavengers filled the nearby rocks, beaches and trees. Some “vulture trees”, including several majestic acacia trees, served as perches for about two dozen of these scavengers at a time. Those that couldn’t wait for new kills were feeding on day-old carcasses. 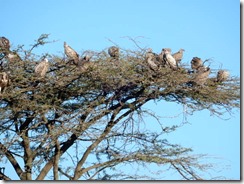 While the bell-shaped horned wildebeest were the star attraction, the park is also home to other types of antelopes: eland, roan, impala, topi, hartebeest, klipspringer, reedbuck, waterbuck, oriibi, steenbok, Thompson’s gazelle, and dozens of other antelope. We saw a number of these and were particularly taken by the agile Thompson’s gazelle, the gracefully S-shaped-horned impala and the spiral-horned eland. Although the Individual wildebeest can’t hold a candle to some of the grace, agility or beauty of these other animals, they more than held their own in numbers–overwhelming the other antelope in numbers, as well as overwhelming the number of total animals, of all species. 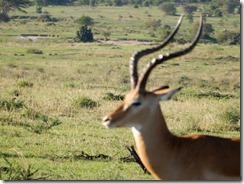 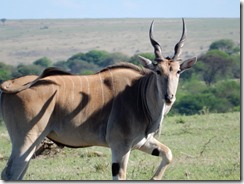 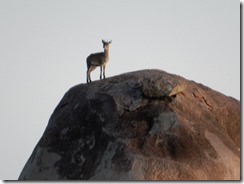 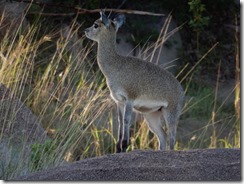 In our next blog, we’ll show you some of the other animals that we viewed.