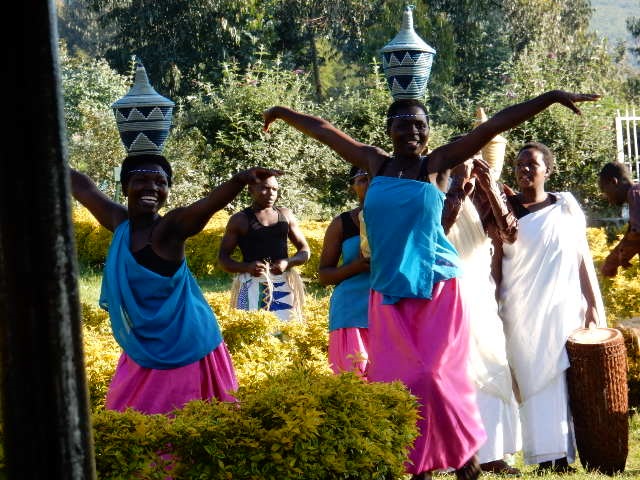 Like most people, we have seen gorillas in zoos multiple times. Each time, we look at them in awe. We still remember the “Planet of the Apes” movies and when we look at gorillas caged up, we wonder what they are really thinking and how they feel in a cage. Going to Rwanda and seeing them in the wild was a chance to see how they really live outside of the zoo.

Gorilla trekking is not cheap by any means. Permits are very expensive ($750 per person per day for us) and decent lodging is also quite expensive as the better places lodge to people who can afford it. We choose to see gorillas in Rwanda versus Uganda as:

We approached our two planned gorilla treks with great anticipation and only vague notions of what we were to experience. By the time we finished, we left with two wonderful, radically different experiences that combined into an experience we will not soon forget.

First our hotel, the lovely Sabinyo Silverback Lodge, where we stayed for 2 nights.

This small, very well run lodge, was a relaxing refuge from gorilla trekking. Service is impeccable with your every need and thought anticipated in advance. As soon as our driver/guide got to the parking area, someone was there to hand us walking sticks to help us as we climbed up the long steep path to the lodge. There we were greeted with some lemonade and a hot towel…similar to how we were greeted each time we arrived back. After a brief introduction, we were led to our bungalow consisting of a very comfortable king size bed, full bath with a tub and shower. A bottle of champagne was also waiting for us in an ice bucket. Wifi is complementary in the main building, although it was slow at times. But remember, you are here for the gorillas. The main lodge had 3 separate rooms in which you could relax. One large room with a fireplace and multiple couches and chairs, and 2 smaller rooms, each with a fireplace and someone continually looking after you and providing you with whatever drinks you wanted (full bar included in the price). A small snack was served right before dinner…chicken wings one night and a small quiche another night. You could go into dinner at any time after 7 pm. Dinner consisted on soup (their soups are incredible and are probably some of the best we have ever tasted), salad, rolls, and a choice of your entree and dessert. I wish we could have said that the food was great but we found the main dinner dishes (outside of the soup) lacking in flavors and seasonings. Breakfast was good but standard fare (eggs, bacon, cereal, fruit, etc.)  that is hard to mess up). Lunch was a little more tasty than dinner, but one would not go hungry or be thirsty. As elsewhere in the lodge, the dining staff was extremely attentive.

Since the lodge is based on gorillas trekking, they do everything they can to make your experience go well. The staff supplied (and helped you into) gaiters (required for the mud and stinging nettles), a backpack, gloves and a rain coat, They gave you a small snack in case you got hungry while trekking (you never knew how long you would be out as the treks varied in length and depended on when you found the gorillas). When you did return back, you were offered lunch. If you returned too late for lunch, as we did one day, they brought soup and bread to our room.

Upon returning from your gorillas trek, someone helped you remove your gators and very dirty muddy shoes (which, amazingly, were dried, cleaned and returned to you within hours). As you donned provided sandals, someone else took your gear. Showers and a change of clothing were very welcomed, Laundry was included and returned in time for the next day’s trek.

Other than the non-inspiring, but adequate dinners, this place is the place to be. The service level is 5++++++ and the accommodations are very nice indeed.

OK, enough about lodging, Let’s move on to the real objective…gorillas.

Gorillas trekking here is interesting in more ways than one, Your guide takes you early morning to a “staging” area where the visitors are entertained by native dancers.

At the same time, the guides and park rangers begin the process of dividing the people up into groups of 8 to see the gorillas. Guides tell the rangers if their people want to do hard, medium or easy hikes. Depending on how many people want to do each type of hike, the rangers secretly move around and look at people to assess their level of physical ability. Guides also lobby for their people and for their vehicles as many guides do not want to subject their vehicles to the arduous, very rocky roads that lead to many trails. Fortunately, our guide, the wonderful Runigamugabo Emmy ([email protected]), believed that we should get what we want versus what was best road for his vehicle. What we wanted on day 1 was a fairly strenuous climb to a great gorilla family. The other people assigned to our group had all the right clothes for a strenuous hike but neither want as strenuous of a hike nor were as fit as we were for it. Lesson to don’t buy the fancy hiking clothes if you aren’t really into hiking.

Our first gorilla trek started with almost an hour drive along a very rocky, bumpy road to reach our starting point. Then it was a strenuous three hour trek up (with an elevation gain of roughly 1,700 feet to a height of more than 10,000 feet) through a dense jungle to our destination–the afternoon feeding and resting site for 37 mountain gorillas of the Pablo family (named after the dominant silverback). Silverbacks are usually the eldest, most dominate male, named after the silver on their backs as their hair turned, much like ours does as we age.

The part of the family we saw included a giant 600 pound silverback male, about four babies (from about three to seven months of age), a couple dozen females and pre-16-year old males. They were split among two groups, about a dozen were in trees and bushes eating prodigious volumes of fresh vegetation. A single silverback alone eats about 70 pounds of plants per day, with bamboo being one of their favorite foods.

The other members, a short distance away, were resting. Many, cuddled together, or a few feet away from each other, were sleeping or just laying back. Others were involved in social time, such as grooming one another. And then there were the adorable babies, continually climbing upon the ever-tolerant adults and chasing and wrestling with each other, while tumbling over the adults.

Even more fascinating than the activities (or lack thereof) of the gorillas, was their reaction to humans. While humans groups were strictly limited (a maximum or eight guests plus guide, trackers, porters and armed guards in the background–just in case), the gorillas almost viewed us as extended family. Our presence caused absolutely no concern and they watched us with almost as much interest and curiosity as we watched them. We were able to get within inches of them as they moved around us.

After an hour of this fascinating encounter we reached the government-defined limit of time that could be spent with the gorillas, and hiked back down the mountain.

Our second day’s trek entailed a shorter hike (about an hour up with less elevation gain) though fields planted with potatoes and chamomile, to visit a smaller family named Intambara, that consisted of seventeen members, including three silverbacks.

This encounter was totally different that our first. When we first arrived, the members were scattered into small groups, with most at least partially obscured by the foliage of which they were feasting. Although our views were limited, we were particularly captivated by a mother holding and gently playing with a tiny two-month old baby. While some of the others watched us between bites of grass, many seemed all but oblivious to our presence.

Then, after 10 or 15 minutes, one of the silverbacks rose and began to slowly move right toward several of us. Although we began to move to make way, our guide told us to stay where we were. Then, one by one, a number of other gorillas, generally by size, began to follow–all passing within inches of Tom, with some thoughtfully pausing to pose for ultra-close ups (Joyce got so excited that she didn’t get Tom’s head into tone of the picture when the gorilla was passing him).

Most of the gorillas, in turn, followed the leader into a small clearing where most stopped for rests or snoozes, the young-uns played in the trees and climbed vines and one rambunctious teen hammed for the audience by swinging from branches (until they broke, falling with him to the ground) and beat his chest.

As peaceful and caring as these gorillas may seem, relationships are not always as idyllic as suggested by the experiences of our brief visits. Dominant silverbacks and younger and aspiring ones have frequent flights. The Intambar family is even named for the frequent fights and shows of dominance among its largest, most powerful males. Then, if a male is unlucky enough to be killed, his widow may face an additional trauma. Although she may well be accepted by another male, that male will kill the mother’s child to ensure that she devotes full attention to his own offspring.

After a delightful hour with this family, our allotted time had expired and it was time to hike back to our starting point. Our discoveries, however, were not yet over. On the way down we saw an unexpected sight; an eighteen-inch long, 1-inch diameter pinkish yellow worm. When we reached the trailhead we began our final bone-jarring ride down a deeply potted, rock-strewn dirt road lined with people exiting village churches in their Sunday-best clothes.

All-in-all, experiencing gorillas in their natural environment, and getting within inches of them, was an experience that we will never forget.