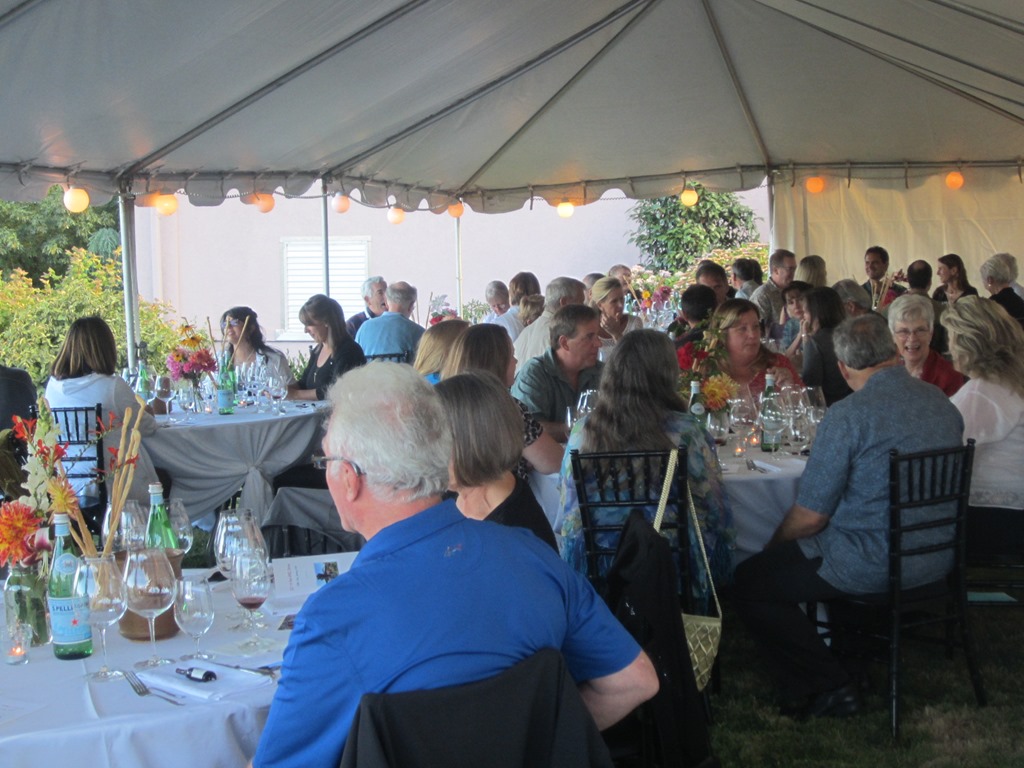 When IPNC (International Pinot Noir Celebration) comes to the Willamette Valley Oregon each year (see our blog on IPNC), many of the wineries throw a pre-party dinner the night before the big event. Wineries do not have to be participating in IPNC that year to have a dinner (many wineries alternate years in which they participate in IPNC). It gives people a chance to visit those who may not be pouring at the event.

So many wonderful dinners to choose from and only one night. The pressure was on to choose a winery that we liked with an interesting menu. At least that was the intent. But not everyone posted a menu. We decided to take a leap of faith and chose one of our favorite wineries, Cristom, without knowing the menu. Many of the evening’s attendees were wine club members, but IPNC attendees were also invited. Thankfully, Cristom provided a very friendly shuttle bus firm to take us from town to its vineyard so that we wouldn’t have to attempt to drive after an evening of food and wine.

It was a beautiful evening…not too hot and not too cold. The event started in the tasting room with appetizers (Willapa Bay oysters, prawns, dungeness crab salad on rye crisps and grissini with prosciutto ham), served with their 2013 Estate Pinot Gris (Eola-Amity Hills) and a 2011 Mt Jefferson Pinot Noir (Willamette Valley). So far so good. And the very nice people in the tasting room gave us some tastes of some of their other wines too (yes, we did end up buying a couple of cases of wine as a result).

The main event took place right outside the tasting room in an open tented area overlooking the beautiful vineyards.  Winemaker Steve Doerner discussed the wines, and the vineyards from which each came, between courses. And of course, we had some wonderful wines–all well-aged, well-paired library wines–to compliment the dishes:

The only flaw was that each course was very slow in arriving. We weren’t sure why, but the Cristom folks tried to minimize the issue by bringing out more wine while we waiting. Unfortunately,  that meant that we didn’t get back to our hotel until after midnight and the next 3 days were going to be jammed with IPNC events. Yes, we cursed when the alarm woke us up the next morning and we were still tired. But all in all, it was an enjoyable night.