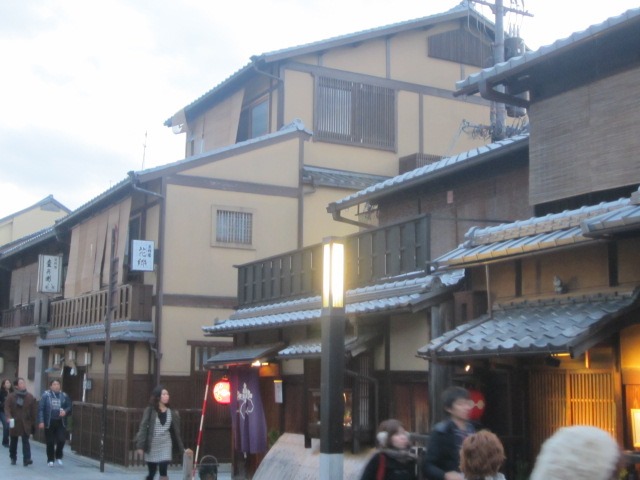 No trip to Kyoto Japan is complete without a visit to the Gion District. Originally developed in the Middle Ages for travelers and visitors to the Yasaka Shrine, the area evolved to become one of the most well-known geisha districts in all of Japan.

We wanted to learn more about this lovely and mysterious district. So we joined WaRaiDo Guides (www.waraido.com) for an evening walking tour that promised to explain the history, the culture and the current life of Gion, as well as the life’s of the district’s most glamorous and mysterious inhabitants; geiko (which is what geishas in Kyoto are called) and maiko (geiko in training). This is not a red-light district as geikos are entertainers, not prostitutes. it is a very honorable job.

Maiko enter training after a six month apprenticeship during which they are assessed for their passion and determination. Once accepted, typically at age 15 or 16, after junior high school, they forgo formal academic education in favor of cultural training: traditional Japanese dancing, singing, playing of musical instruments, painting, calligraphy and so forth. They train for five rigorous years in which, in addition to their training, support geiko by dancing, and joking with and playing games with customers. During their five-year training and apprenticeship program, they live in special maiko boarding houses, eat only food that is prepared for them and learn the highly prescribed rules by which they must dress, make themselves up and fashion their hair. For all of this, they pay no tuition and receive no pay–just room and board plus a few extra yen to cover incidental expenses.

When they graduate and become geiko, their dress, their shoes and their hairdos change. They wear 10-centimeter-high clogs, prescribed kimonos and sashes (which typically weigh 10-15 kgs), wear special hairpins and have prescribed makeup. They are, however, somewhat freed from all the work and uncomfortable sleeping arrangements that maiko must undergo to care for their hair–geiko, unlike maiko, are allowed to wear wigs. Once they graduate, they are also ready to entertain customers, provide professional-level entertainment (especially singing and playing music) and most importantly, develop their own clientele. This clientele, however, cannot contact or engage the geiko directly: all is arranged through, coordinated by the tea house that is hosting the geiko. All payment (with the exception of tips), moreover, is paid to the tea houses, which in turn, pay the geiko.

Just how long does this evening of entertainment last? Two hours, at which time the geiko has to leave to go to another teahouse for her next appointment. How much does an evening of entertainment cost? While this varies by geiko, typically about $500 for two hours, plus food (which has to be ordered in), plus tip. But money alone is not enough to get you an appointment. You must also be referred.

These practitioners of entertainment have their own highly prescribed customs, obligations, ceremonies and even competitions. On the first day of the geiko New Year (January 7 in 2014), for example, there is a special ceremony and geiko of the year (a highly coveted title that goes to the geiko who earned the most money for the previous year) is announced. Geiko and Maiko even have their own shrine in the middle of Gion.

Speaking of Gion, this section of Kyoto is where the entire tradition began, is currently the location of two of the five authorized geiko districts in Kyoto, a city which has more geiko (200) and maiko (80) than any other city in the country.

Did we actually see a geiko or a maiko? Not this trip. On our previous trip to Kyoto, however, we did see a beautiful and graceful geiko walking between appointments. Unfortunately, on this trip, most geikos were taking the new year’s holiday week off. But we were told when and where to best spot maiko–just before 10:00 AM in front of the entrance to the official maiko school, which is just around the corner from the official maiko hair salon, which is just around the corner from the two largest maiko boarding houses.

While we were unable to admire the beautifully dressed geikos with their exquisitely makeup-applied white faces, we were able to admire the perfectly maintained 17th- and 18th-century wooden buildings in the area and to eat at multiple restaurants during our stay. 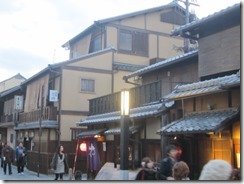 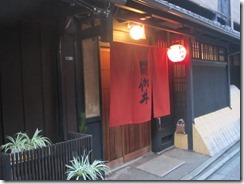 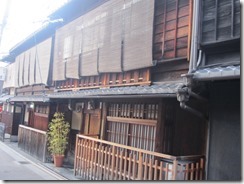 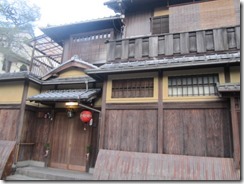 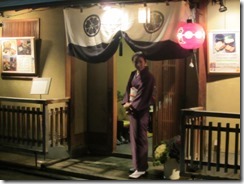 And we certainly admired two equally historic, nearby extensions of Gion: Gion Kaikan, just to the north, and Pontocho, just to the east, on the east bank of the river. This street, in particular, is totally lined with restaurants. Virtually every building on both sides (not to speak of the side streets running off Pontocho) has a restaurant. Many on the river side, have their authentic historic entryways leading to modern towers that offer multistory views over the river. A few, in particular, have tables aligned in front of windows on each floor in a way that creates a striking image, especially as reflected in the water. 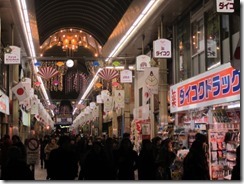 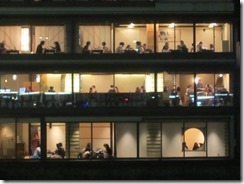 Day or night. It doesn’t matter. This is a very interesting area to visit.