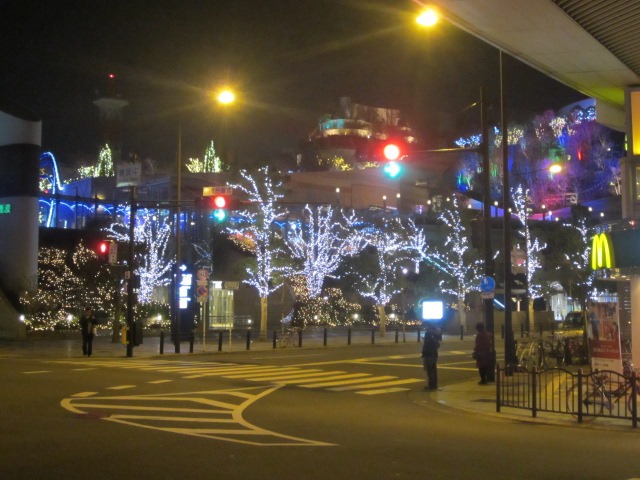 Japan was the last country that we visited on our 4 month trip to Asia.  We flew into and out of Osaka since it was the closest major airport to Kyoto (our main destination), rather than for a particular desire to visit the city. But between our flight into and out of the airport, and a day trip to Nara, we spent three evenings in the city. That is 3 long days/nights in Osaka searching  for things to do.

Osaka consists mostly of post-war buildings as most of the city was destroyed in World War II.  One of its oldest buildings, a reconstruction of the 400-year-old Osaka Castle is,  a concrete 1931 reconstruction of the granite original, that has no interior details and two relatively marginal exhibits. The Museum of Oriental Ceramics is supposed to be quite good–especially for its Chinese collection. But after seeing world-class collections of Chinese ceramics in two of the premier museums in Asia, (Beijing’s Capital Museum and Taiwan’s Palace Museum, we decided to pass. Temples? These too were rebuilt after the war. Besides, we were spending four days visiting Kyoto’s famed temples so again we passed.

So we focused on one of the two things for which Osaka is best known: nightlife. The action is focused in three adjacent neighborhoods. 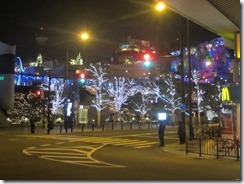 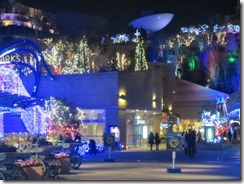 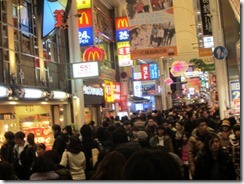 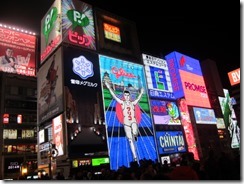 By the way. I mentioned that Osaka is best known for two things. Nightlife is one. The other is work. It is one of the most productive and richest cities in Japan and its metropolitan area has a GDP that is largest than all but a handful of countries. Most of this work takes place in another section of the city altogether–Umeda,which is filled with skyscrapers, modern hotels and high-end stores.

We were surprised at how little English we found in Osaka.  Each restaurant that our hotel recommended to us resulted in wandering around, trying to find it in spite of provided directions. And when/if we found the restaurant, it was challenging to understand the menu. Still, we found some interesting places to eat:

New Year’s Breakfast. Since people are not supposed to cook on New Years, a special Osechi Ryori menu is prepared at least a day before. To ensure that the food does not begin to spoil, much of it is dried or prepared with sugar or vinegar. Our breakfast, which was available through our hotel at a nearby restaurant, consisted of eight items: Zoni soup (based on white miso), rice with red beans, freeze-dried tofu, carrot and daikon salad, red and white fish cake, dried anchovies, black soybeans and sweetened chestnuts. All, except for the dried anchovies were pretty good. We especially enjoyed the soup and the black soybeans. The traditional meal is eaten with non-traditional chopsticks; made of willow, thick on the middle and narrow and rounded on each end. These are intended to symbolize man eating from one end and the gods from the other.

We stayed at the Fraser Residence. The best thing about this hotel was its location of being steps away from the Namba train station. The hotel provided excellent directions of getting from the station to the hotel…about a 5 minute walk. The second best thing about this hotel was that it had a washer/dryer, which is always welcomed when travelling. This one bedroom apartment gave us room to spread out in. It had a small kitchen area so we could have our morning tea as well as a sitting area with a couch and chair. Breakfast was included, and you could choose to eat in the restaurant on the first floor or at a restaurant in the shopping mall. We ate at both. The one in the hotel was pretty stingy on the amount and quality of the food. It took us several tries to find the one in the mall. But once we did, it was much better. The bedroom had a king size bed. Unfortunately, the room was too small for the bed and one person had to get out of bed by scooting down to the bed’s bottom (since one side of the bed was against the wall). Since the door also butted into the bottom of the bed, you had to close the door first to have enough room to get out of the bed. While the location, washer/dryer and space were a definite draw, the furnishings were on a Holiday Inn level….serviceable, but not exciting. Still, it was clean and we had a comfortable night’s sleep. If in Osaka again, we would stay here.