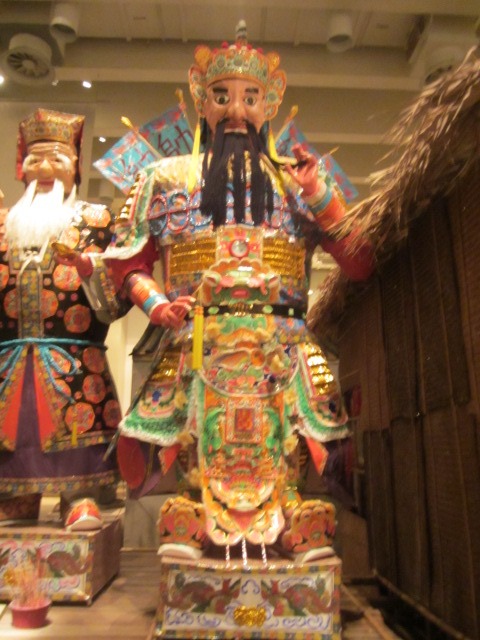 After staying on Hong Kong island for a few days, we moved over to the Kowloon side to explore new territory.

If you’re looking to shop for jewelry or watches, Kowloon is the place to be: You can spend an entire day within just a few blocks of Nathan Road. Since we are not shoppers, we spent a 3 hours learning the fascinating history of the region at the  Hong Kong Museum of History. A fascinating, if confusingly laid museum that begins with a bit of science (the geologic formation of the region,the climate that has shaped it and the flora and fauna that was native to it) before tracing its history from pre-historic times, through the Chinese Dynasties, the colonial period, to its transfer to China. While there is evidence that Homo Sapiens have lived in the region for more than 10,000 years, civilization arrived in form of the Yue culture about 3,000 to 4,000 years ago. These people integrated into and were eventually subsumed by the Hans by the Ming Dynasty. Their economy was based largely on farming, fishing, salt and ceramics production and trade, with some pearl diving and the growing of incense trees. 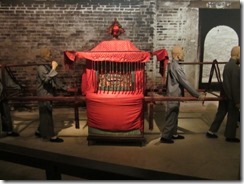 Then came a couple of big gaps in the museum’s coverage.

We did learn, however about the Opium Wars and how the wars led to the ceding of Hong Kong to the British; the history of the colonial era, including how Britain’s establishing it as a free port led to explosive growth; the governing institutions, educational system and infrastructure they created; the creation of huge trading and banking firms and the relative British and Chinese cultures that developed under British rule–including Britain’s barbarous trade in coolies and how the Hong Kong administration eventually stopped it.

The museum also educated us on the horrendous three years and eight months that Hong Kong endured under Japanese occupation, including the executions, treatment of POWs and the hyperinflation, economic depression, degradation of the educational system and the starvation that occurred. It detailed the great progress that was made after liberation and the role of multiple low-skill industries in spurring its growth into a global economic power (plastics, toys, flashlights, clocks and watches, cameras, etc.), although it curiously does not really explain how Hong Kong developed into the type of high-skill economy that has produced its current lifestyle.

The exhibits ended with descriptions of the type of natural disasters the region endures (typhoons, droughts and landslides) and the devastation they cause and then two very stilted short promotional films–one on idyllic Hong Kong made in the mid-1900s and another explaining the incredible benefits from reunification of Hong Kong into the mainland Chinese fatherland.

But for the relatively minor gaps and oversteps, it is a very interesting museum. Much larger and not quite as professional as the Macau museum, but well worth the time nonetheless.

We could have spent another few hours next door, at the Museum of Science. And, if we hadn’t just returned from the best Chinese art museum in the world (Taipei’s National Palace Museum and recently been to what is probably the second best in Beijing, we would have visited the Hong Kong Museum of Art. Or, if we wanted to go further inland into the New Territories, we could have visited the Hong Kong Heritage Museum, visited the remains of one of the region’s walled cities or gone for a hike.

These options notwithstanding, keeping occupied in Kowloon can require a bit of planning. Daytime options include: 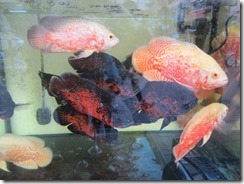 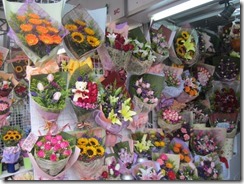 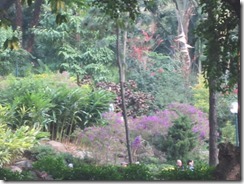 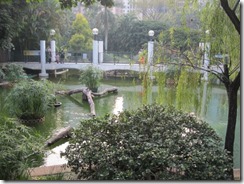 Evening offers additional entertainment opportunities. Assuming there are no concerts or shows in town, you an check out the: 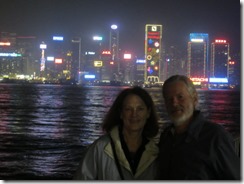 Seeing in the New Year

0r, if you happen to be there on Western (as distinct from Chinese) New Year’s Eve, as we were, you can stake out a fireworks viewing location on the waterfront promenade, rent a $1,000 (U.S., not Hong Kong) hotel room, have a late dinner at at restaurant or lounge with a view, or as we did, join one of the hotel’s New Year Eve parties. Ours was at the Icon Hotel, where we were spending the night. (Click here to see more about the evening). Dinner consisted of:

The Waygu beef was the standout; perfectly prepared (medium rare),juicy and delicious. The Baked Alaska was the weakest; Neapolitan ice cream on cake, covered with meringue and briefly flamed. Joyce makes a much better one using brownies.) The prawn was the largest we have ever been served and was quite good, except for the minimally concentrated lobster sauce.

While the other dishes were generally good, the egg, scallop and chicken broth were the best among them. Dinner was accompanied by entertainment. The band played standard music that was intended to offend no one, although we have to say that  two of the supporting singers (who took leads in some songs) had among the worst singing voices we have heard. Overall, the portion of entertainment in which a DJ mixed songs was probably the best.

After an evening of all-too-much eating and drinking, it was time time to retire to the hotel’s open-air pool deck to view, from what we had read on many web sites, were supposed to be a great fireworks display (https://newyearseveblog.com/new-years-eve-fireworks-hong-kong/, https://www.discoverhongkong.com/eng/see-do/events-festivals/highlight-events/countdown.jsp?page=1). We got less than we bargained for: an eight minute show that combined lasers with a few minutes of decent fireworks over the island’s skyline. 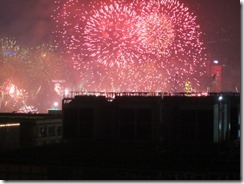 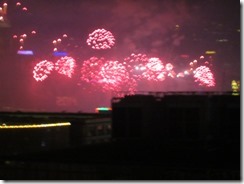 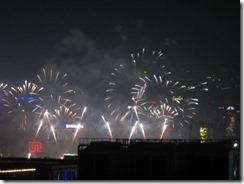 Then, while the party continued, we went straight to bed. Due to some very, very shortsighted scheduling, we had a 10:30 AM flight to Osaka on January 1 (the gateway to the last leg of our trip to the area around Kyoto). That meant we had to leave at 7:30. (That being said the airport express service we took to the airport made the morning as pain-free as possible, picking us up from our hotel, checking in and checking our bags at the city terminal and taking a smooth, comfortable train straight to the airport.)

Just as bad as our fireworks planning, scheduling such an early departure meant that we would have to miss the city’s New Year’s Day celebrations with a day filled with a big Dragon and Lion Dance Parade. We will have to plan better next year.

We came to Hong Kong with high expectations for its restaurants. We had some wonderful food in Beijing and Shanghai and expected nothing less from a dynamic, culturally diverse city like Hong Kong. Instead, the Chinese restaurants we visited, all of which were crowded, acted like it was a distasteful obligation to serve us. The food was okay, but totally uninspired; like the same old chefs had been preparing the same old recipes, from the same ingredients for the last 30 years. Dim sum, which is the local specialty, was somewhat better and the Kowloon restaurants we tried did offer some unusual (at least for us) dishes. Even these, however, were generally only average compared with some of the better dim sum restaurants we’ve been to in San Francisco and New York. We ate at the following: