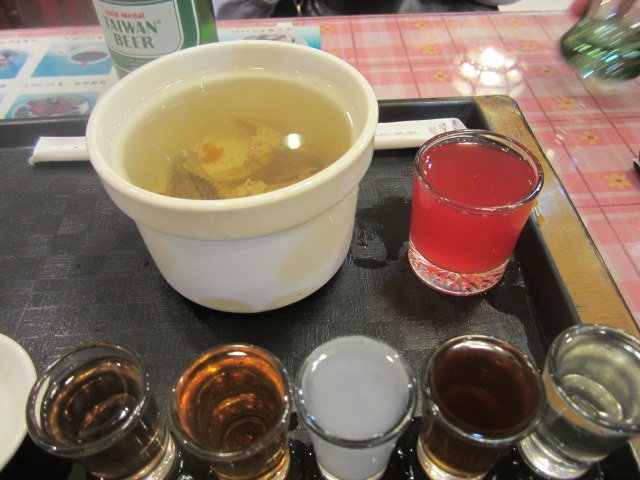 Taipei presented eating challenges to us as English was not as commonly understood as in other cities. And it didn’t help that many of the maps we were given did not include English names. Still, we persevered by getting recommendations from our hotel for restaurants, as well as counting how many streets we had to go by before making a turn, then how many additional streets to make the next turn. Plus, we had our hotel call up Google maps on their computers (which was also in Taiwanese)  to show us a picture of the restaurant entrance since none of the signs used English characters. Knowing that the entrance had a red sign became very helpful (plus having the hotel write out the name and address in Taiwanese so we could ask for directions).

We ended up sampling a number of restaurants serving traditional Taiwanese food. 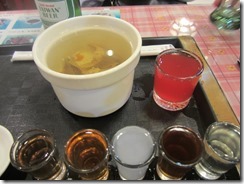 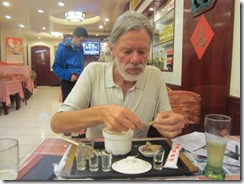 We stayed at the San Want Residences on Nanjing East Rd. The hotel was several blocks away from an MRT subway stop, which made it a convenient location. However, it took longer to get the the MRT stop than it should have as lights to cross some of the streets are long (some cross streets did have underground paths which made it a little faster). The rooms were comfortable, although on the small side. The bathroom, however, was quite large. It had a “full-service” toilet, whose lid opened and closed where one walked in front of it.  I had fun walking in and saying “seat up” and the seat rose. Boy, am I powerful. And, of course, it had all of the “washing” features that one can find in some Asian hotels. It had a large nice rain shower and a step down Japanese-style soaking tub. The staff was very helpful and gave us good restaurant recommendations and directions.

Although many reviews of this place talked about how well the staff spoke English, we felt that they didn’t understand as much as one thought. Often they answered what they thought was the question versus what the question was. I don’t mean to single out this hotel for this issue and it was very common during our entire Asian trip. But what is important is that they tried very hard. Usually when we asked a question, the person would call over 1-3 others, they would talk together in Taiwanese, and then the person would provide an answer to what they think we asked.

The hotel had a little lounge area that had coffee and tea and little snacks available continually. When we originally arrived, they gave us a buy one get one drink coupon. To our surprise, they honored the coupon both nights (we didn’t ask the second night, they volunteered it). When we arrived back at the hotel after the bar closed at 9 PM, they were more than willing to bring some wine to  us in the lounge area. Our room came with a buffet breakfast that offered an assortment of items for various nationalities.

Wifi was free throughout the hotel (and in the room) and was very good.

This is a very comfortable place, that was reasonably priced for what you got, and with a wonderful staff.