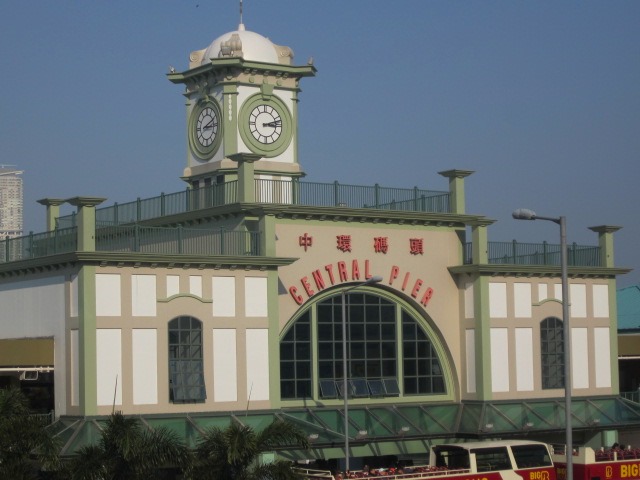 Hong Kong has always been about the future. Although the island had been used for farming and fishing for millennia, its real history didn’t even begin until 1841, when the British secured rights to the island from China in return for lifting a shipping blockade Britain imposed after China initiated the Opium Wars (in an attempt to free its citizens from the opium addiction perpetuated by the British opium trade).

Even in 1841, it was formed not as means of housing its people, but on a dream of creating a trading empire. While the colony grew into the 1900s as a trading hub with the West, it didn’t really take off until after WWII, after the Japanese was forced to withdraw from its four-year occupation of the island, when the Communist takeover of the Chinese mainland created a flood of refugees and when the island began emerging as a manufacturing hub. By 1997, when the British rights to the island expired and it was about to revert to China, Hong Kong had become a global financial center whose land had become so expensive that all its growth was up. Hong Kong had been "Manhattanized".

When we visited Hong Kong in 1995, before the island reverted to China, we were captivated by its energy and its unique blend of east and west, where modern British sensibilities and business practices seemed to meld with traditional Chinese beliefs and culture. As part of our 2013/2014 Asia trip, we wanted see if Hong Kong had changed since becoming an autonomous Chinese state and if we would still find “treasures” in the antique shops that line Hong Kong Island’s Hollywood Road and Kowloon’s (the primary mainland component of Hong Kong) Nathan Road antique and jade shops as we did on our previous trip.

We started our visit on the Hong King island. Our exploration focused, quite literally, on the island’s high points (on an island where almost everything is high). Yes, a few sites are at or around sea level. These are pretty much all in the Central District. They include parks (especially Statue Square), the small handful of colonial buildings that survived the island’s rush to vertical growth. Among the most important are the 1855 Government House (the former residence of colonial governors, and now the Hong Kong’s Chief Executive), the 1911 Legislative Building and the 1849 St. John’s Cathedral. Then, of course, there’s the city’s iconic Star Ferry and its terminal building. 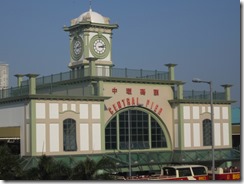 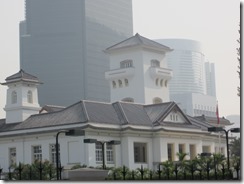 While the city now boasts a number of beautiful, and ever tall high rises, two of the older ones still define the island’s central landscape–I.M. Pei’s HSBC Building and Sir Norman Foster’s Bank of China Tower (both, not coincidentally, financial titans). This having been said newer towers such as The Center (on the island) and the International Commerce Center (across the harbor in Kowloon) are taller and others, such as Central’s Lippo Center are as architecturally interesting. 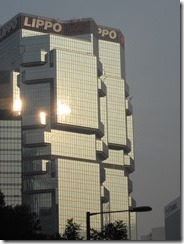 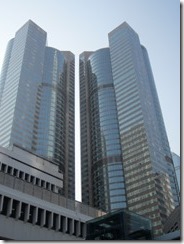 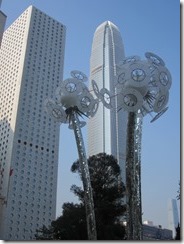 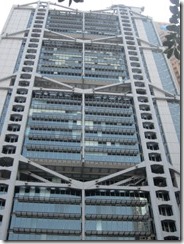 Moving Up the Mountain

Since the flat Central district has long since been filled with the tallest high-rises, development has moved irrevocably up the slopes of Victoria Peak to the middle heights. A network of curvy roads, steep stairways and the novel 2,600-foot-long outdoor free escalator take you up the hill to midrange high-rise apartments, condos, hotels and to the trendy restaurants and hot nightspots of the Lan Kwai Fong district. They also take you to one of our favorite streets: Hollywood Road, which is home to the number of antique stores that sell Chinese porcelains, wood and ivory carvings and jades that we so love and have collected. However, with the prices increasing about tenfold since we last bought here, we ended up not buying anything.

Then as you climb inexorably uphill, the high rises, which rise at 45-degree angles from the step slopes, get increasingly expensive. Moving further up, at the top of Victoria Peak, you reach the traditional home of the island’s wealthiest, most influential and most British residences. (Now, wealth alone is sufficient to buy one’s way into a Victoria Peak home.)

The original Victoria Peak residents relied on Chinese porters to carry them and their belongings up the steep hill. These porters were largely automated out of their jobs in 1888 with the completion of the Victoria Peak tram (actually a funicular). We took the funicular to the top to see the extraordinary views of the island and across Victoria Harbor to Kowloon (fortunately we arrived around 10 AM when there was only a 30 minute wait to get on the funicular. When we went back down, the line looked liked it would take hours to get on). Although we passed on the highest most unobstructed views from the ultra-touristy Peak Tower Sky Terrace, we the two-mile walking route around the ultrafashionable Legard Street which encircles the peak and serves as the home to some of the island’s most wealthy inhabitants. When the road was built atop the peak’s cliffs in 1911, it was hailed as an engineering, as well as a scenic masterpiece. Now, the engineering accomplishment has been overshadowed by a century of technical advances and the scenery limited by the growth of vegetation and especially the smog that comes to the relatively green island from the mainland. It does, however, still offer incredible views and, judging from the long queues to board the tram, it is still a mandatory stop for any Hong Kong visitor. 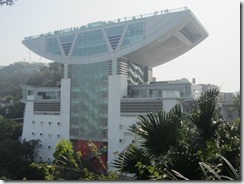 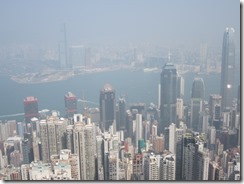 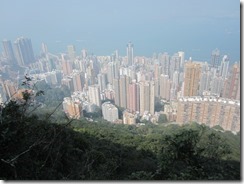 We couldn’t help finding the island’s hottest nightspots. Lan Kwai Fong is a neighborhood just up the hill from Central. While it consists of a number of condos, hotels, art galleries and antique stores, it is also "Bar Central". The lower section of Wyndham Street and all of D’Aguilar Street and Wing Wah Lane are totally filled with bars and restaurants, all of which open to the streets, even in winter, when many locals take to wearing down jackets to brace themselves from the unaccustomed chill. The crowds and the alcohol must also help wars off the chill, since there are plenty of both, especially on Friday and Saturday nights.

The city obviously has no problem with the crowds since it perpetuates it blocking all of D’Aguilar and Wing Wah (which is a captive lane off D’Aguilar) off from traffic in the evenings. True, the bars don’t really begin to hop until after our self-set curfew, as evidenced by the fact that most Happy Hours don’t end until at least 9:00. Still, we saw enough to anticipate what the streets would look like by around midnight–not to speak of on a holiday weekend, the night of a big football game or a warm summer night.

Then, a couple of blocks up the hill is SoHo (South of Hollywood Road) which is Hong Kong’s Restaurant Central. It is literally filled with restaurants, including many of the most popular and highest priced in the city. Staunton Street and the alleys running of it, in particular, are lined with restaurants of every imaginable type, from Argentinian steak houses through Japanese sushi bars. All of which are expensive and the vast majority of which are popular.

Although the most interesting restaurants in the city are focused on primarily on ethnic foods–especially those from different Southeast Asian countries, we were, as throughout this trip, focused primarily on traditional and especially on interesting interpretations of local foods. Two of our island stops, both of which we found lacking, were extremely traditional local restaurants. These were:

Our two other island food stops were: