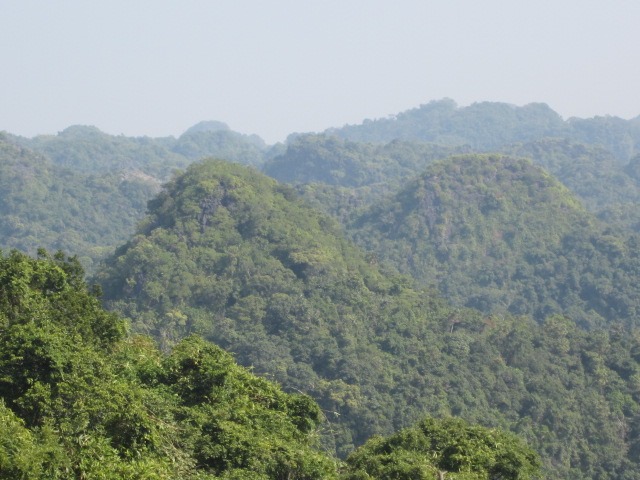 Part of our 3 day/2 night adventure to Halong Bay, Vietnam included a side trip to Cat Ba Island, Vietnam—the largest island in Halong Bay. After an overnight on our boat in Halong Bay,  we were transferred to another boat for a beautiful hour and a half cruise to this island. Once landed, we went directly to Cat Ba National Park—which is approximately one-half of the entire island. There we took a 40 minute hike (actually a combination of steep, uneven stairs and rock clambering up and another 40 minutes down) to a rickety watchtower on Ngu Hill  for a view over the karst hill and cave-studded landscape. 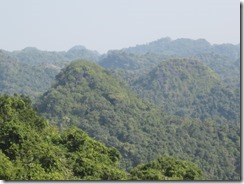 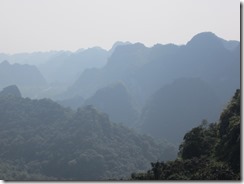 Then, after checking into the very nice, very scenic Sunrise Resort, we had a tasty, leisurely, six-dish lunch that was included in our tour (rich and delicious cream of pumpkin soup, tangy green mango salad, nicely balanced sweet and sour prawns and fish , stir-fried vegetables, rice and a dessert of caramel flan and fresh fruit salad–not to speak of a half bottle of Sauvignon/Chardonnay). Then we were off to explore the coast and “downtown” Cat Ba City.

The coastal trail is the short (roughly 20 minutes each way) from Beach Number 3 (over which our hotel room had a pretty view), past Beach 2 to Beach 1 (yes, those are the names of the beaches),with different bay and karst formation views along the way. Then we walked  a whole 5 minutes into town, for a very brief tour of the town’s highlights, which consist primarily of a waterfront park with views of the fishing and tourist boats in the harbor, and, of course, the rock formations. 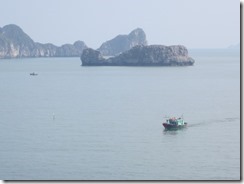 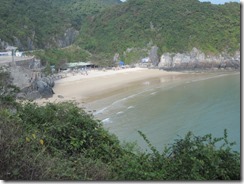 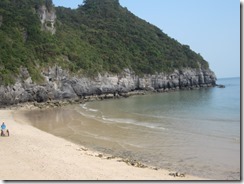 The harbor is also home to about half a dozen floating restaurants, some accessible only by boat, some by ramps from the mainland. Since we had no choice but to try one, we went to Nha Be Lang Chai, where the proprietor gave us a tour of the baskets of live  seafood suspended in the water so we could select our preference. Our choice; grilled clams. He scooped a net full out of the appropriate basket, washed them thoroughly and served us a big plate of delicious salty, sweet clams with dipping sauces and Ha Noi beer. Wonderful and we forgot to take a picture until after we devoured the clams. 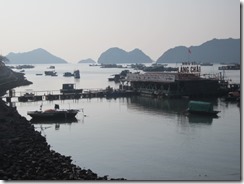 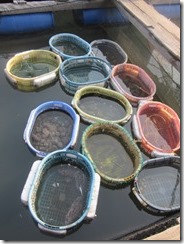 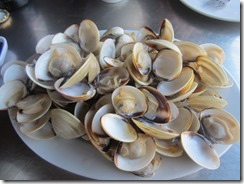 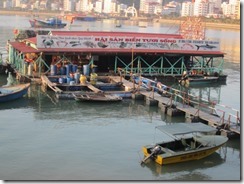 Then we found ourselves in front of Le Pont Restaurant, perched at the top of a high,west-facing promontory just as the sun was preparing to set. A to-die-for view and a perfect spot for a sunset drink. 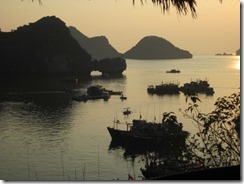 Then back to our hotel for dinner (included in our price). This meal, also multiple dishes, started with seafood chowder, hot and spicy jellyfish salad (for Tom, not Joyce), seafood in a hot pot, stir-fried squid with mushrooms, garlic and celery, grilled pork spareribs with honey glaze, stir-fried vegetables with garlic, stir-fried vegetables, rice and for dessert, a frozen chocolate mousse on vanilla cake with chocolate sauce.

Normally we have low regard for tourist hotel restaurants, especially when the food Is included in the price. This restaurant, however, was an exception. Dinner was just as good as lunch. Although we almost laughed when we saw seafood chowder on the menu (we lived in Boston for more than 20 years), this was one of the best chowders we ever had. It was rich, creamy, delicately flavored and loaded with clams. The jellyfish was also among the best Tom has had. The seafood was crunchy with a slightly pickled taste and the vegetable salad complemented it well. Although extracting the meat from the bone and the rib bone and the fat was a challenge, it was worth it. The dessert, meanwhile was addictive, despite the fact that neither of us are real chocolate fans (but we learned to like chocolate deserts from our friend Les). The calamari was the only disappointment. While the ingredients were fresh and cooked perfectly, it lacked the sauce required to enhance the taste. While soy sauce helped,it was not a substitute for the complex sauces that accompanied the other dishes. Overall, a very good restaurant that served two of the better meals we have had in Vietnam. Not bad considering that we were planning to forgo the meals we had already paid for in favor of a more interesting restaurant.

The room at Sunrise Resort hotel was quite comfortable, albeit very quiet as we were out of tourist season. this is a beach resort town and the weather was quite chilly. We had a nice little balcony overlooking the beach and bay. Too bad it was too chilly to enjoy a drink on the balcony. There was also a nice beach bar, but again, too chilly to appreciate. We suspect that this hotel would be a wonderful place to go in warmer weather. But it served our purpose and was only a 5-7 minute walk into “downtown”. If we were to go back, we’d book a room here.