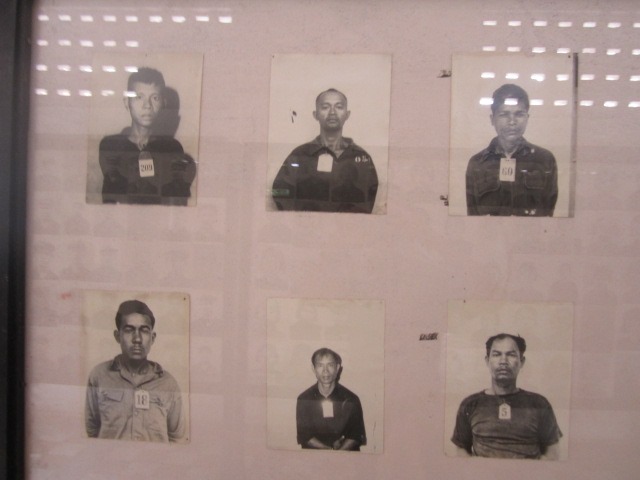 Many museums in many countries chronicle  the horrors inflicted by others in war.  Visiting Auschwitz and Krakow were especially chilling, as were many of the other locations where the Nazi’s tortured people. Phnom Penh was equally chilling.  We couldn’t visit Phnom Penh, the capital of Cambodia, without trying to gain a better understanding of what happened there and why.

We learned about “what” but will never understand “why”. Still, here is what we saw and learned during a tour arranged by Urban Adventures (phnomphenurbanadventures.com). Like other similar places, these are very disturbing tours. So stop reading if you need to.

First stop was The Tuol Sleng Genocide Museum a museum in Phnom Penh. This former high school was used as the notorious Security Prison 21 (S21) by the Khmer Rouge regime from its rise to power in 1975 to its fall in 1979 as an interrogation and torture center center. The museum provided a visual overview of the terrors that took place in the complex (including the cells, the torture beds,the tools of torture and pictures painted by a torture survivor) and then attempted to humanize the tragedy through portraits of the guards and torturers, prisoners and the the tiny number of survivors. As we learned in other places, the torturers were almost as intimidated as the prisoners, threatened with death for virtually any infraction (including sleeping on duty or having one of the inmates commit suicide while they were on watch).  In fact, many of the guards were tortured and killed by other guards who were forced to kill them or be killed. And those who killed were then killed by others who were forced into it.

This was only one of up to 150 torture and execution centers and up to 20,000 people were killed here (the number varies based on the source), although there are 7-12 known survivors(again, depending on the source). Prisoners has strict rules. One rule was to not make any noise while you were being tortured. The educated, professionals were especially targets. But targets  became almost anyone to get them to reveal others who might be against the regime. They took lessons from what the Germans did in their concentration camps, which we leave to your imagination. Once the location was liberated, many things were left in place so that people would remember. This includes blood splatters on  walls and floors as well as chains. Pictures of dead prisoners and guards were put on displayon walls (again, reminded us of how the Nazi’s kept meticulous records of each person, including photographs). One of the survivors, who is still alive, was also there to sign/autograph a book of his story while imprisoned. 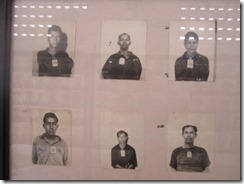 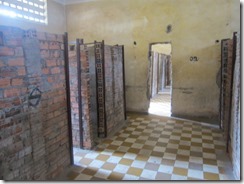 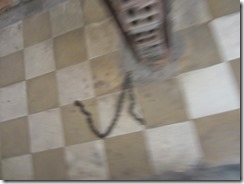 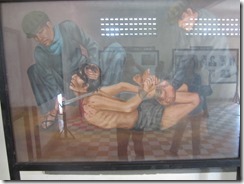 From there, we went to Choeng Ek Killing Field and Bone Pagoda,  one of 388 extermination camps to which those marked for death were taken. People were brought here by truck under the pretext of this being their new home. Once settled in a common building (although none of the buildings remain, their sites are marked), they were taken left blindfolded with their arms still tied behind their backs. Then one by one they were led out and told to knell down. Little did they know that they were at the edge of a pit that would serve as a mass grave. They were slashed across the back of the neck with machetes or hit on the head with shovels (to avoid the noise of gunshots) and, if they were still alive, had their throats cut if they were lucky. Those who weren’t lucky got pushed still alive in the mass graves to eventually die.

Women got special treatment. They got to watch their children being beaten and killed before they too were dispatched. To further bring the horrors home, the sight has displays of bones and clothes and a special pagoda housing skulls of some of the estimated 20,000 victims of this one camp. As if this weren’t enough, walking though the yard takes takes you past (and so sometimes atop) buried bone and clothes fragments that are continually washed up to the top of the ground by the rain. 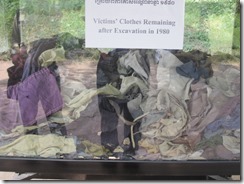 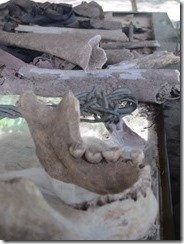 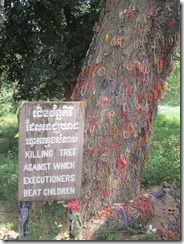 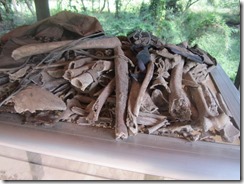 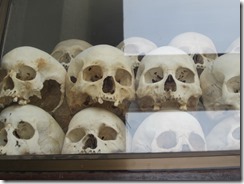 Although the Museum and killing field were poignant in and of themselves, the passion and articulate explanations of our guide made the horrors even more poignant. Our guide Sim,  began by providing the political context for the emergence of the Khmer Rouge regime. He began by explaining how Pol Pot, a monk was radicalized in Paris, returned to Cambodia as a schoolteacher, communist provocateur and opposition leader to the regime of the King, who was so loved and so successful in turning Cambodia into the "Pearl of Asia" as to be elected Prime Minister. Then, how the prime minister, in a bid to play China against Russia, against Europe and America, turned to Communism and lost credibility and support among both governments and his own people.

This eventually prompted a coup in which the new solidly pro-western government permitted America to bomb and defoliate the countryside in an effort to disrupt the Viet Cong’s Ho Chi Minh Trail supply line–killing about 800,000 Cambodians in the process. This created the dissatisfaction that allowed Pol Pot and his followers to build popular support. Once the U.S. withdrew from Vietnam, military and economic support for the Cambodian government fell and Khmer Rouge came to power.

While initially viewed as a liberator by most of the citizens, the honeymoon was short-lived. Within days of entering the 1.5 million-person city of Phnom Penh, he announced that America was preparing to animate the city and ordered a forced evacuation of the entire population to the countryside with only a few hours notice (as a key step toward his goal in creating a communist agrarian society). Then, under a ruse to identify professionals and intellectuals, he asked qualified people to volunteer to help their fellow citizens. These volunteers, and later their families, were taken to the torture centers (including S21) where they were forced to give up other intellectuals and potential political opponents–each of who were intern, tortured and killed.

He then overplayed his hand by turning against his former North Vietnamese ally and launching strikes into Vietnam. Vietnam responded with a massive attack on its own, defeating the Khmer Rouge and installing a new government that was loyal to Vietnam. According to our guide, It is this government, with its pro-Vietnam policies and its granting of Vietnam and China preferred access to the country’s resources and business opportunities, that is prompting the country’s current political unrest.

Meanwhile, the Khmer Rouge has been out of power for 35 years. Its deeds and the magnitude of deaths–an estimated 1.7-2.5 million–have been documented and proof of its deeds is incontrovertible. So what happened to those who committed these atrocities? As amazing as it may seem, not much.

Pol Pot retreated to the north of the country where he was protected by loyalists and died of natural causes (at age 72) in 1999. The World Court, meanwhile, has convened a tribunal to try some of his primary aides. To date, a grand total of two—yes two–have been convicted and given life sentences, according tour guides, the government pays the 7 survivors of S21 restitution of $25 per month. Meanwhile, the government is paying a total of $1 million to house the person that has been held responsible for thousands of tortures and deaths. Justice? You decide.