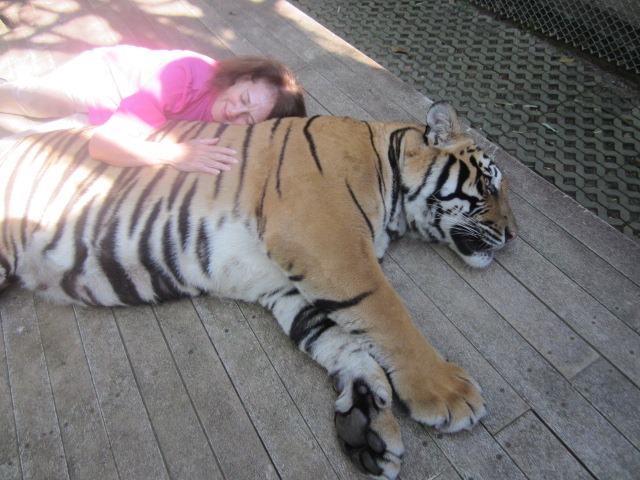 Tiger Kingdom, where visitors can see tigers of all ages and touch and take pictures of yourself with animals from three months to three years of age—really. Although it initially felt like we were enabling the exploitation of tigers, we soon learned that all these animals were specifically bred and maintained for life in captivity; up to three years in the Tiger Kingdom and then to zoos. You can view (but not touch or get too close to adorable month-old babies (wish we had good pictures of them because they were adorable) and a a few giant tigers, including an incredible white Siberian. You pay based on which size tigers you want to visit: small (3-5 month old), medium (5-7 months) and large (up to about two years). We chose all. A guide accompanies you into each cage to keep you safe and to make sure you get to interact with the tigers. You can pet them, lay on them and even feed the babies. The small are adorable and playful. The large, rather placid (they sleep up to 18 hours per day) and actually, somewhat frightening to be right next to. But we always felt safe.

Although we felt somewhat guilty in partaking in such a boldly exploitive activity, the park helped assuage our guilt by explaining how the tigers would have never been born if not for this role, how they are raised with continual human care, how they are never ever drugged or sedated, and how they typically enjoy longer lifespans than in the wild. We are not convinced about the “not drugged” part as the babies especially were lively one second and dead to the world the next until they were aroused by a keeper to interact with the next tourist. Then boom…asleep again almost as if drugged. Exploited or not, it was an amazing experience and worth the price tag. And no, these are real tigers and not stuffed animals. 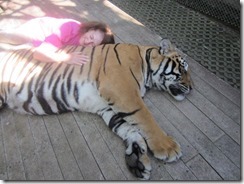 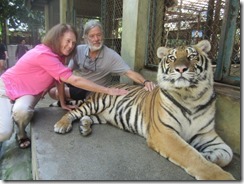 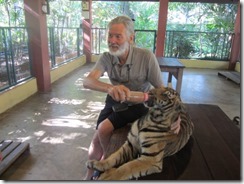 Maesa Elephant Camp Show. We have ridden elephants through the jungle and have seen them up close in Africa but, other than at a circus, never saw them perform complex learned tasks. We general do not go to touristy shows but these elephants have been trained to paint pictures, including some complex landscapes—which we felt we had to see. In fact, in 2005, eight elephants working side-by-side, created a large (roughly 35×15 feet), impressionistic painting of the Thai countryside, where you can barely see where one elephant’s  work ended and another began. The painting was sold for  about $50,000, and donated back to the camp for display. Smaller elephant paintings are available for sale for between $150 and $200.

We wanted to see some of these paintings and watch the elephants produce new ones. The show included much more than painting. We first watched them get into a stream and bathe themselves in a stream (The baby, in particular, was having a ball.) Next came displays of complex learned tasks and dexterity including dancing, playing soccer, shooting free throws with a ball, throwing darts, moving and stacking logs and then painting. Wach elephant was taught to paint one specific design (although they do move on to different designs as they learn and demonstrate aptitude). The mahoud (the trainer who works with the same elephant for many years at a time), puts paint onto the brush and gives it to the elephant who draws a line or applies a dab before returning it to the mahoud for a different color. It was unclear to us if the elephants had any idea of what they were painting or whether they were simply following a specific script (i.e., stroke one is a vertical line in the middle of the page, stoke two is a dab at the end of the line, etc.)

Although the camp’s mission appeared to be focused on entertainment rather than education, our guide did give us a basic primer on elephants, such as that females begin having babies at about 15 years, carry them 22 months until birth and typically have a total of four or five babies in their lives. The babies, which which are 18-30 inches tall and weigh about 200 lbs at birth, spend their first two years feeding exclusively on their mother’s milk and dung after which the mother teaches it to find and eat its own food. They can live 70 years in the wild and 80 in captivity. Elephants’ enormous appetites, combined with the limited amount of open terrain in which they can feed is making it all but impossible for them  to thrive in the wild and the government has cracked down on one of the few ways in which loggers had been able to afford to use them in their work (by feeding them with amphetamines to increase the work they do and reduce their food consumption). These parks–where they are trained and used as entertainers–are one of the few ways in which Thailand can afford to maintain elephants, and with their mahouts, in caring and loving environments). Still, we felt sorry for them being forced into entertaining tourists. 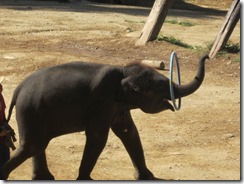 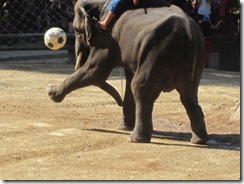 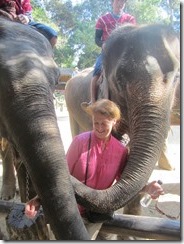 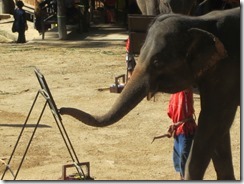 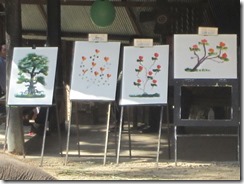 Baan Tong Luang Tribal Village, is an agricultural village that houses a 300-person community of seven hill tribes (Karen, Lahu, Palong, Hmong, Kayaw, Akha and Mien) that migrated from Myanmar to Thailand to escape persecution and in search of economic opportunity. Although it is a living, working village, it has also been turned into something of a museum (where visitors pay the equivalent of about $17 apiece to see tribal people in their distinctive native dress, performing daily task, such as weaving and husking rice) and a series of souvenir stands (where visitors can purchase traditional handicrafts (clothing, jewelry, musical instruments and so forth) from the women who are producing them. The native attire is certainly attractive and distinctive. The Lahu, for example, wear black suits with colorful pattern and big metal earrings and necklaces made of natural products such as beans; Akha wear blue and black dresses with short body shirts, girdles and caps; and Palong wear skirts adorned with a line of buttons and metal hoops on their waists.

Most distinctive, however, are the Karen long-neck women, some of whom continue to embrace an age-old practice of wearing brass rings around their necks and legs, a practice that began to protect women from tigers (who try to bite victims necks and below their knees) when the men were out hunting. They put on their first rings when they are about 5 years of age and add more and enlarge the rings as they grow. The neck rings, which can weigh over five pounds, stretch the neck by pushing the shoulder ones down and may sometimes allow the neck muscles to atrophy to the point where a woman’s neck can no longer support her head. While the practice is becoming less common-especially for women who work outside their villages, and women have been educated to take off the rings periodically to exercise their neck muscles, we still saw some relatively young women wearing them.

While this activity also felt exploitive, our guide did explain that while some of these people do have outside work (typically as low-cost laborers), few have commercial skills and that opening their village to tourists does provide them with critical income. 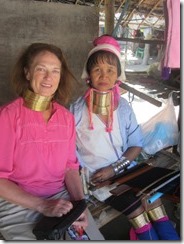 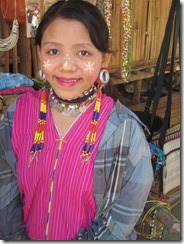 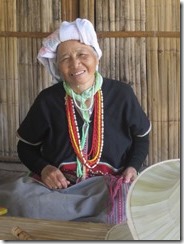 Doi Suthep and Wat Phra. Doi Suthep is a 3,500-foot mountain that is home to one of the most sacred sites in the country. A road up the mountain leads to a 306-step stairway flanked by the bodies of very long, multi-headed serpent. It leads to a series of platforms on which are statues of a goddess, of demon guardians and of many Buddhas. Multiple temple buildings contain murals (including one detailing the life of the Buddha), carved wooded panels,more Buddha statues and realistic statues of worshipping monks. The centerpiece of the 600-year-old monastery and temple is the 200-foot tall gold chedi that supposedly contains Lord Buddha’s collarbone. It is sheltered by four large umbrellas and flanked by Buddhas, especially a lovely marble Buddha and an unusual one made of green glass. The mountainside also provides great views, especially of the city. 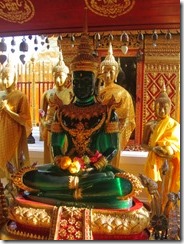 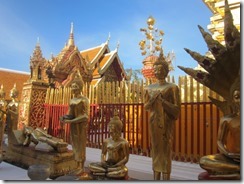 Jade Factory at the base of the stairs to Wat Phra made for a interesting and expensive last stop before returning to the city. After a brief movie and explanation of the history and different types of jade, and a brief tour of a small jade carving workshop, we scoured the showroom to find a Jadeite carving that we had hoped to buy since the beginning of the trip. After jade stops in virtually every city we were in (including in Burma, from which all the highest quality jade comes), we finally found the piece for which we were looking and negotiated what we believe to be a fair price. 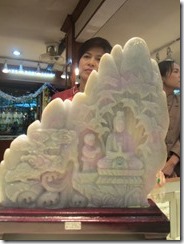 A Half Day of Thai Crafts Shops

We also visited a number of craft factories and showrooms where we managed to keep our wallets in our pockets but got some interesting insights into some of the processes. For example:

One of the most interesting shops, however, didn’t even have the pretext of a factory. According to the manager, it was a showroom for handicrafts produced entirely by hand (without any use of electricity or machines) in Thailand, from natural materials, by about 30 high-quality, highly specialized families of craftspeople. Although we wanted to take pictures of some of these beautiful products (nothing, unfortunately, that we wanted for ourselves, but beautiful nonetheless), this store, along with some of the others, had strict no photography policies to protect the designs of their artists. However, the range of crafts was huge, from wool and silk rugs, to scarves, wood carvings, lacquer ware, pottery, bronze castings, sculptures and jewelry. The most magnificent were a couple of 6×9-foot wall hangings made from gold threat, 18-carat gold leaf and and studded with all types of semi-precious stones from all around the country. Beautiful, and for a mere $20,000 (negotiable, of course), one of them could have been ours.