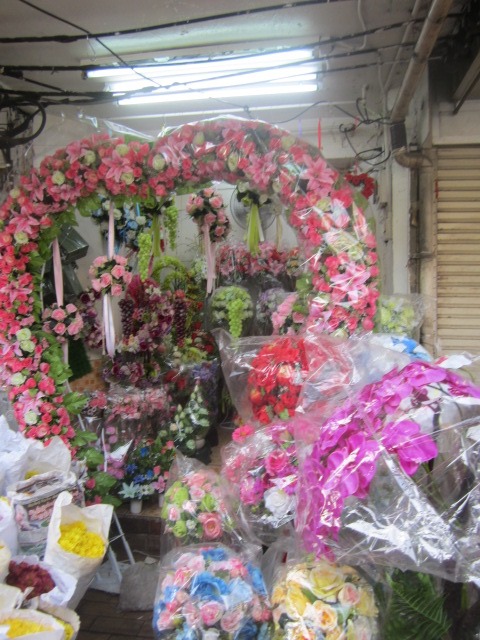 Bangkok, Thailand is packed with incredible historic and religious sights. The city and the surrounding area (especially the ancient royal city of Ayutthaya) has a long and complex history. Plus its food culture is as rich as its history and its art.

Although we had visited this area many years ago, we felt that we needed to experience it again. Rather than rely on our own research, we decided to give Tom a break as being tour guide and signed up for a wide range of tours that we hoped would provide us with the context of the city’s primary neighborhoods and sights.

On our first day in Bangkok, we engaged with Bangkok Walking Tours ( www.BangkokWalkingTours.com) for a private orientation “walking” (which included boats and taxis when required) tour of many of the city’s most important historic and cultural sights. It was a great way to get our bearings. Our guide, Niranya, helped us get reacquainted with Bangkok and its many beautiful sights, while also explaining history, culture and even foods. some of the highlights were:

Flower Market, with its huge selection of fresh flowers and lovely arrangements and garlands that people purchase and use as offerings at temples and shrines. A dry market and food market flow right into the flower market. 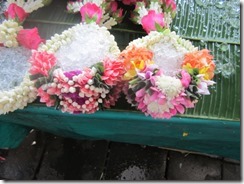 Grand Palace. One could spend an entire day in this incredible complex. Built in 1782 and serving as the home of Kings ever since, the complex houses a museum of royal paraphernalia, including all types of gold, jewel-encrusted swords and symbols of nobility and most impressive of all, the golden coronet (crown) that the King wears at coronations. The palace complex also houses Wat Phra Kaeo and its iconic Emerald Buddha (actually carved from a single block of jade) with its rotating summer, winter and rainy season gold outfits) and a huge murals that tells the life story of the Buddha and episodes of the Thai Ramakien epic.

But the most awe-inspiring part of the complex is the buildings themselves. These typically Thai style buildings and temples (although the large reception hall consists of a Thai-styles second floor above a European-style first floor) consist of golden chedi and buildings and temples covered in bright, shiny, multi-colored glass mosaics that positively glow in the sunlight. The entrances to the temples are guarded by carved Chinese warriors and guardian figures and the temples themselves contain many Hindu elements, emphasizing the multi-cultural composition of Thailand and Buddhism’s Hindi origins. As if to emphasize this openness, there is even a separate Hindu temple inside the otherwise Buddhist complex. 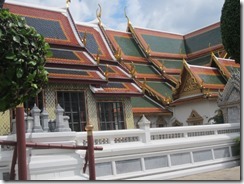 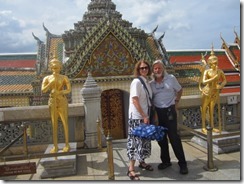 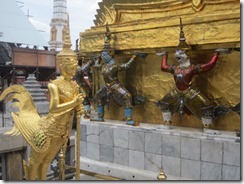 Wat Pho, an absolutely amazing temple that is the oldest and tallest in the city. The complex, which once served as a hospital and the county’s first public university (be sure to see the educational materials inscribed in some of the walls). The 91 structures in the complex are encrusted in beautifully patterned colored glass mosaics, some with elegant teak pillars. As if this weren’t enough, there is a separate building dedicated to a lovely, 150-foot long gold-coated Reclining Buddha with a tranquil, sleepy expression on its face, its hand held in an elegant lotus symbol and lovely engravings on the soles of its feet. 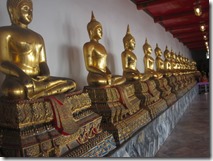 Wat Arun, located cross the river, this temple offers an opportunity for a very steep climb up the 282- foot central structure to a great view of the city. The temple itself is encrusted in charts of Chinese porcelains, some of which are in lovely patterns. The climb offers an opportunity to see them close-up. 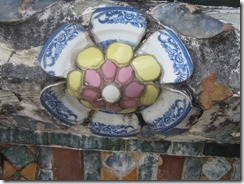 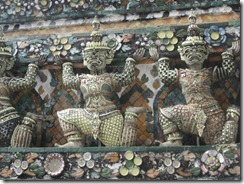 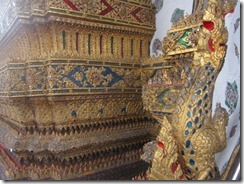 Thammasat University which, although founded in only 1934, is the city’s second oldest university and the alma mater of many of the country’s highest-level political officials.

All in all, a great first day. But with all of the pictures in this blog. You’ll have to wait for the next blog to hear more……