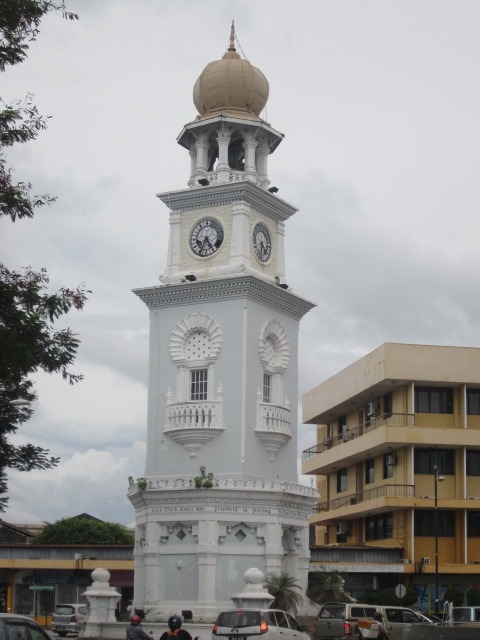 As our days in Malaysia drew to a close, our last stop was Georgetown. As our previous stop had been in our least favorite Malaysian city, Kuala Lumpur (KL), we had hoped that Georgetown would have us leaving the country on a high point. We were not disappointed.

Georgetown was founded in 1786 by the British colonial founder (Captain Francis Light) who acquired rights to Penang from a Malay Sultan and established it as a sheltered trading port on the Malaccan straits. He declared the city of Georgetown as its capital and laid out the original grid pattern around which the city was built. The city grew quickly as a trading hub. Then came the discovery of tin and and the American Civil War which fueled the tin market (America needed huge supplies of tin to package food for soldiers in the field).

The tin trade became so profitable that the Chinese clan fights over rights to the tin concession prompted something of a Malay Chinese civil war (the secret society wars of 1867) that almost overwhelmed the colonial government’s ability to restore peace. The tin trade, combined with the establishment of rubber plantations and a huge influx of new settlers–especially Chinese–created a population surge that caused the city to overflow its original grid. Swamplands were filled, the waterfront was extended and the city literally exploded into the largest and richest of the Malacca straits trade centers. It overtook Malacca before itself being overtaken by Singapore.

This resulted in a very wealthy city in which different neighborhoods had–and still retain–very different characters. for example: 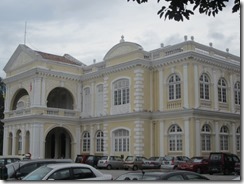 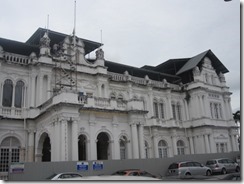 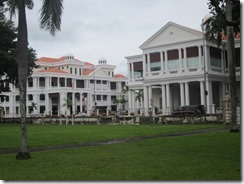 And, beyond the city center:

We wanted to drill deeper into 2 city highlights but fait inspired against us as they were closed on the only day we were able to visit them:

Of well. Making lemonade out of lemons, we consoled ourselves by visiting two historic homes: 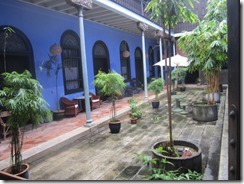 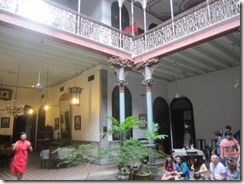 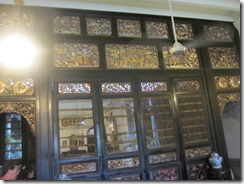 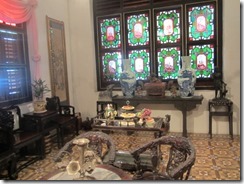 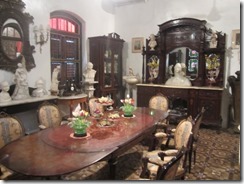 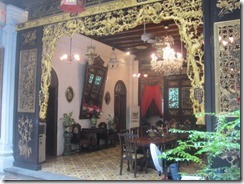 Of course, no visit to any city for us is complete without good food and a comfortable place to stay. First, the hotel.

Seven Terraces Hotel is one of those boutique hotel gems that we periodically run into. The owners bought 9 old dilapidated 19th century Chinese shophouses in the middle of the UNESCO historic area in Georgetown and turned them into this beautiful small boutique hotel that won a UNESCO Award of Distinction for its renovation. It is called Seven Terraces because they originally bought 7 houses, but added 2 additional ones to it. The rooms surround an open courtyard, giving one the sense of space and peace. While it is  mostly new construction (the structures on the properties were in extremely bad shape and there was little that could be saved), it has been constructed in a somewhat traditional style. Our room was 2 stories. The bottom floor is the “living room”, and bathroom. You then ascended a set of stair to get to a very comfortable bedroom loft. Beautiful hardwood floors, nice linens and comfortable bed. The mini  bar was free and contained water and some juices. While we can’t say much for the comfort of the traditional wooden bench in the living room (we think it must be something one gets used to over time), we also had 2 very comfortable upholstered chairs. 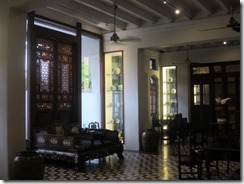 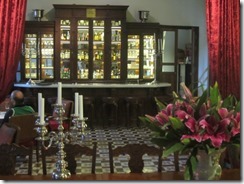 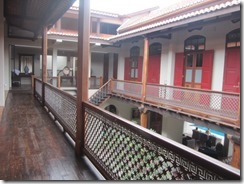 The bathroom was really very interesting. It was a huge room that ran the entire width of the room. On one side was a sink, on the other side the toilet. In between was the rains-shower in the middle of the large room. One entire side of the bathroom faces the street with  shutters that could be opened to  let the light in as well as frosted glass to allow light in while still providing privacy

The owners and staff were extremely helpful and pleasant. When the owner saw Joyce looking for a mystery book on the book shelf, he offered to check his books at home to see if he could find an appropriate book.  The only nits were very minor and would not prevent us from very highly recommending this place:

In addition to the hotel, it also has an excellent restaurant Kebaya Restaurant and lounge (and Bar) (you knew we’d get around to the food and wine).  The meal was a fixed price 4-course meal, where you could choose from several sections. We got to taste many things as each of us choose different items. Not surprisingly due to the pricing, it seemed that most of the guests were tourists. Many seemed to be staying out our hotel, but we did see several parties entering from the street—either they were staying at other hotels or were wealthier locals. Although more expensive that the more local spots, it was still reasonably priced for us, with the entire meal, including wine costing about $100. We had:

OMG. Everything was cooked perfectly, the sauces were delicate and the combinations divine. When you combine this with the atmosphere, the service, the live classical pianist and nice bottle of wine (Chilean Chardonnay/Sauvignon Blanc), followed by an after dinner single malt scotch (MacCallum 18) at the bar for Tom and more wine for Joyce, its tough to think of a better way to spend an evening. Best of all, we only had to stagger upstairs to our room.

As we were only her for a day, we only had one other meal available—lunch. We were told that many of the restaurants in town had a large local patronage. If the tourists disappeared, they would/could still exist. Those are the best kind of places to eat at!

Our hotel had suggested several different places to eat. We ended up at Sin Kheng Aun. This tiny eight tables place was  very informal with plastic chairs and plates. The front area for guests, was open to the street and the kitchen was in the back.  It was an Hainanese restaurant that was highly recommended by our hotel. But Tom never takes anyone’s recommendation at face value and always has to check out the menus of any place. When we stopped by the previous day and asked for a menu, the proprietor responded with a curt "no menu", and then turned away. OK, that was a little turn off, but our hotel urged us to return so we did. This time the proprietor asked us what we liked to eat, the level of spice and the type of sauces. He recommended (and we ordered)

True, the chicken had grizzle and the pork was not the best cut. However, service was fast and efficient and the sauces really made the dishes. A very good lunch for less than $10–including a large bottle of tiger beer,  we couldn’t complain.